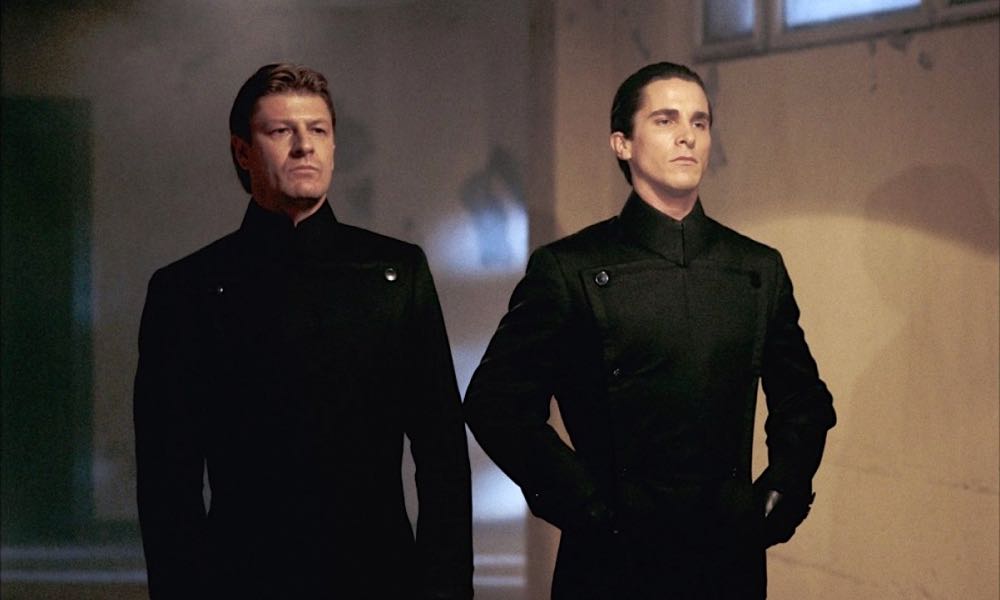 In the long succession of stories about futuristic dystopias such as 1984, Brave New World, and Fahrenheit 451 comes a more recent take on the sub-genre in the form of Equilibrium. Equilibrium distinguishes itself by attempting to cross-breed the sub-genre with a martial arts film with mixed results.

Revisiting the film last night, I was somewhat underwhelmed. Not that it was all bad; Equilibrium is a stylish, violent, and melodramatic attempt at creating an engaging story about one man’s journey back from the brink of becoming a government drone and reclaiming his humanity. The story has a lot of Bradbury’s Fahrenheit 451 in its DNA, and like that story, this one involves civil servants that go around carrying out the law by burning illegal contraband in the form of books and art that might become a problem by causing people to feel emotions.

The story’s premise goes like this: In the nation of Liberia, there is always peace among men. Years earlier, the decision made that having feelings and emotions are undesirable and lead to war is now the law. The rules of the Librian system are simple. If you are happy, expect to be arrested. If you cry, the law will hunt you down. If you read a contraband book or so much as look at a smuggled painting, you’ve committed a crime. To keep the peace, citizens must take their daily doses of Prozium, a powerful designer drug that stops feelings dead and keeps everyone on an even keel. Refuse to take the medication, and special police will find you. Until now, top-ranking government official John Preston has believed in this system and and and and and has upheld the rule of law as a highly-trained “Cleric” who seeks out and destroys those who don’t take their pills.

The Clerics practice a form of martial arts called gun-kata that transforms them into deadly human weapons. Portrayed as similar to samurai, they can do great harm to others although greatly outnumbered and emerge without so much as a scratch.  Throughout the film, groups of men are depicted practicing their martial arts.

The government itself is patriarchal and led by a man referred to as “Father.” Video screens are in abundance around the city with images of ‘Father’ spewing indoctrination 24/7 so that we never forget this is a fascist and repressive regime we are dealing with here. The film is moody and even gloomy in parts to express the situation more thoroughly. I suppose. I couldn’t figure out why a society dedicated to peace would require so many armed militarized police in evidence everywhere you go.

What is also relevant is that John is a single parent with a son and daughter. He’s alone because his wife got arrested as a “sensitive,” someone who feels things. Shortly after the movie begins, John is forced to kill his partner, who turned out to be sensitive. He got caught in possession of an illegal book. One thing leads to another, and when John skips his dose of Prozium, he discovers an incredible new world of sensation that gives him the passion for joining the fight for freedom. There’s also a subplot about an ambitious young cleric who wants John’s job for himself.  The film attempts to create suspense and paranoia without a lot of success.

The liberal use of gunfire and violence was not enough to lift this attempt at creating a unique and cool science fiction story out of mediocracy. I came away from this film with a pet peeve about it. Why is there so much lipstick on all the men in this movie? I can’t enthusiastically recommend this film because there are so many more along the same lines that come to mind that are far more compelling and enjoyable.