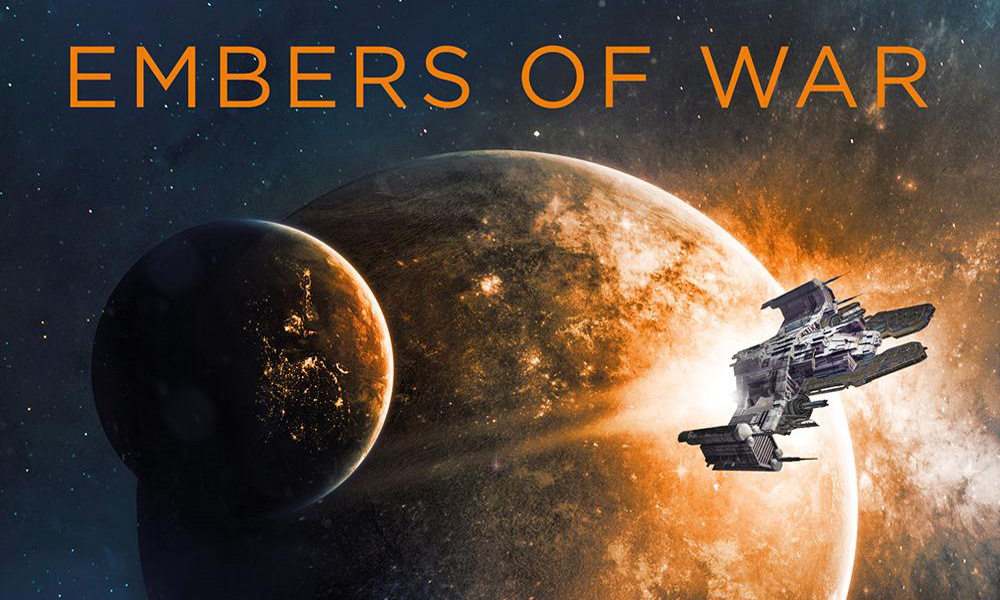 As I’m the new guy here, let me take a moment to introduce myself.  I’m Doug Murray, an old codger who’s been reading Sci-Fi-Fi his whole life—pretty much literally—I purchased my first SF novel in 1953 after watching the George Pal production of WAR OF THE WORLDS.  The book was the novel of the same name, featuring a cover of one of the Martian War Machines from the film.  I read that book (which I still have) and found myself in a whole new world—one of which I have been a part ever since.

I started reading as many SF novels as I could.  For a time, I actually purchased every new paperback that came out (possible in the ‘60’s) and read each and every one.  I eventually turned to the school library for more reading material and, one day in 1960, came across a copy of Robert Heinlein’s STARSHIP TROOPERS.  I loved it—and Heinlein became my favorite author.  I’ve read all his stuff since then but also found myself drawn to other military SF.  That started with THE GENETIC GENERAL, a Gordon Dickson story that was half of an ACE DOUBLE NOVEL.  From there, of course, I read the works of Joe Haldeman (a Viet Nam vet like myself); Jerry Pournelle; David Drake; and a host of others.

Some are good, some are bad, but most make for an entertaining read.

Gareth Powell’s ‘EMBERS OF WAR’ certainly fits that description.  It is a page turner and, as a story, quite entertaining.  The prose is brisk and straightforward with none of the odd names and peculiar titles that many such novels lean toward.  In short, it is a book that Robert Heinlein would have enjoyed.

EMBERS OF WAR starts with a massive bang—we are thrust into the final moments of the battle of Pelapatarn where Captain Annelida Deal is trying to end a war.  Her forces, from the Conglomeration, are trying to force their way past defending forces from the Outward.  If they can reach the planet, they can destroy a bunker in which the leaders of the enemy forces are meeting—and with the head of the enemy destroyed, the war will end.

There is a problem, however, the Outward fleet is fighting with their backs to the wall and inflicting heavy casualties on Deal’s forces.  They might not be able to get through before their target gets away.

She makes a command decision—and sends a powerful force of CARNIVORE-class ships beyond the defenders with orders to bomb the entire planet, killing every creature on its surface.

Including an ancient and sentient forest.

The ploy works, the enemy leadership is killed—but the price is high…

From there, EMBERS OF WAR (appropriate title, incidentally) begins to follow a number of veterans of that war, following them into ‘civilian’ life.

Mr. Powell uses a cinematic trick (each chapter tells of a single individual—and is titled accordingly) to follow those veterans as they struggle to adjust. 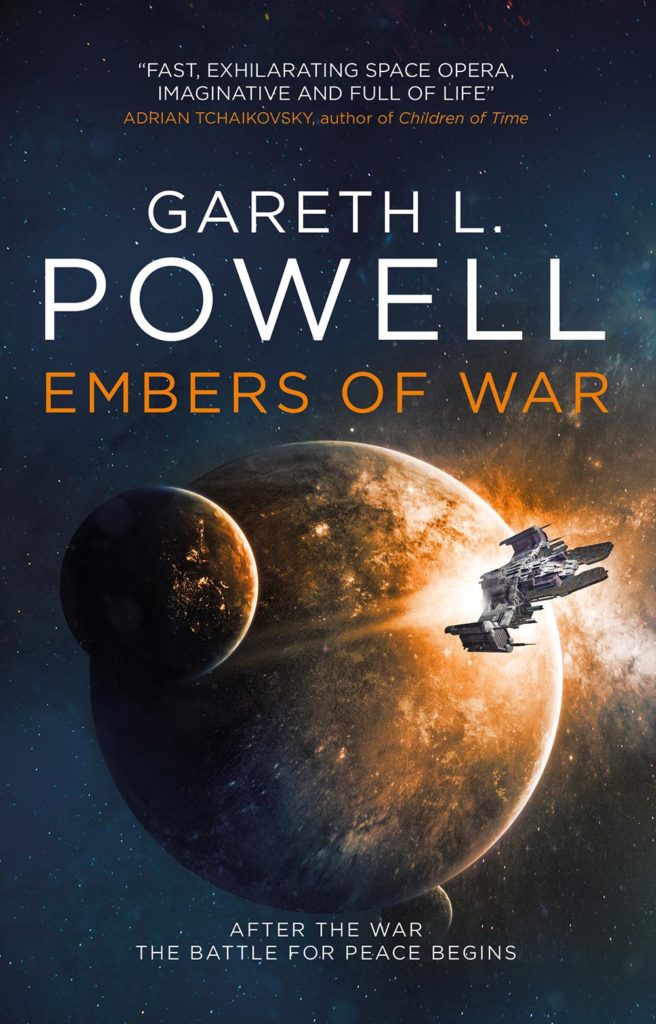 Captain Deal escapes from any War Crime trials by simply disappearing, changing her face and name.  We become reacquainted with her as ‘ONA SUDAK’ a woman who is trying to remain incognito but finds herself writing poetry about the war—poetry which becomes popular to the galaxy at large making her a minor celebrity.

SAL KONSTANZ spent the war as the captain of a medical frigate, avoiding conflict wherever she could. Afterwards, she joined the ‘HOUSE OF RECLAMATION’, a kind of Hyper-powered Red Cross-like organization which does everything it can to rescue lost ships and their crews.

Her own crew consists of other veterans looking for an escape: Alva Clay—a former Marine who was rescued by one of Konstanz shuttles, is in charge of rescues.

George Walker, a mild-mannered sort of man is the ship’s medic…

Nod, a Druff—a life-form who acts as the ship’s mechanic and does everything it can to keep the ship intact and functional.

And the most interesting member of the crew: TROUBLE DOG, the ship itself.  TROUBLE DOG is a sort of biological AI—a brain grown from the cells of a human being infused with the DNA of a dog (for obedience and tenacity).  TROUBLE DOG is also a veteran, one of the ships who completed that final bombing run at Pelapatarn, an act which caused her to resign her commission and, like Captain Konstanz, join the House of Reclamation.

When Medic Walker is killed in a possibly-preventable attack during a rescue, Captain Konstanz finds herself isolated—Clay blames her for the loss of Walker as does the leaders of the House—she may well lose her command but that will have to wait—for the moment, she and her depleted crew have a job to do.  A space-going liner, the GEEST VAN AMSTERDAM, while passing through ‘The Gallery’, an odd solar system in which the planets have somehow been carved into recognizable shapes, has been attacked and shot down.

And the TROUBLE DOG is the only ship close enough to arrive with even a hope of rescuing the crew.

They are given a new medic—a young man named Preson Menderes, and head out, making a single stop on a backward planet (Cichol).  There, they add two passengers—Ashton Childe—a Conglomeration spy who has been assigned the unenviable task of supplying rebels in their fight against the government of Cichol.  It’s dirty, meaningless work and the strain is slowly killing him.  When he is ordered to accompany the TROUBLE DOG, it is like the first glow of light in the darkness of his life.  He goes joyously, accompanied by his opposite number, Laura Petrushka, a spy from the Outward.

The now-enlarged crew lifts for the Gallery—but TROUBLE DOG has received a warning from one of her packmates—another CARNIVORE-class vessel.  It’s a simple message: Do Not Come Here.

But of course the TROUBLE DOG and her people have to go—and it inside the BRAIN, one of the sculpted planets of the Gallery, that each of them discover they true destiny…

TROUBLE DOG is a remarkable character—an AI that has a true personality. There have been sentient ships before–Anne McCaffrey used them with great skill in several books, but Trouble Dog is something special–not quite human, certainly not all dog—but a composite that is very special.

His other characters are just as well-drawn.  Everyday humans–men and women you might meet on the street today–who have gone through the furnace of war and have come out different–forged by conscience and guilt—broken, and then rebuilt

Mr. Powell has created a universe of surprising depth and interest, and one can only hope that he will revisit it in future.  In the meantime, EMBERS OF WAR is quite a good read–a page turner with heart and soul–one that should appeal to Sci-Fi readers at every level.