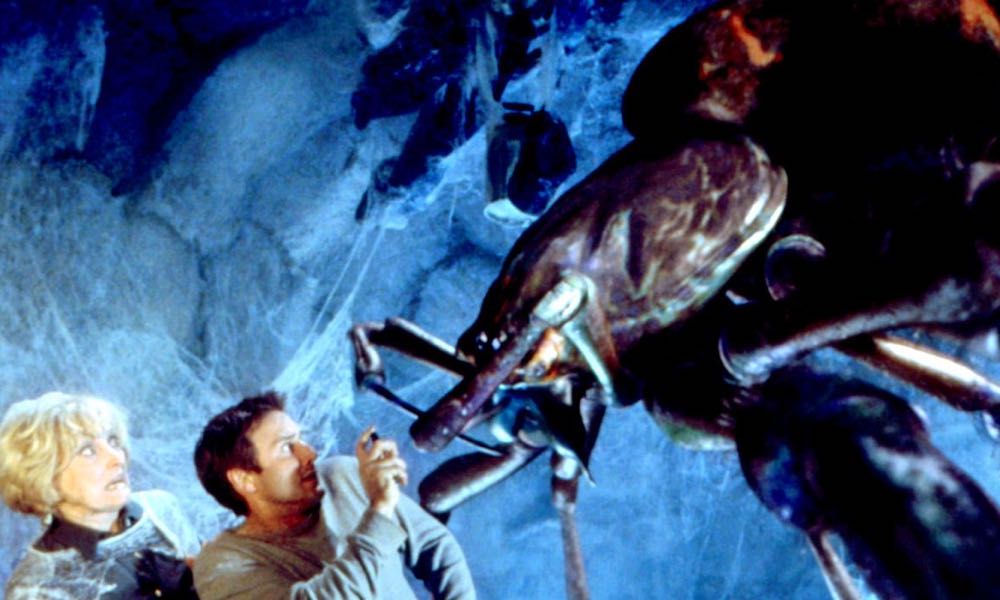 SPIDERS!! Spiders and more spiders are the featured menace in this fast-paced, tongue-in-cheek tribute that’s almost a parody to fifties ‘B’ movie science fiction horror. It’s been a long time since movie makers realized the potential of bringing them to the big screen and cashing in on our instinctive dislike for spiders. This film is not the first time these much-maligned creepy crawly creatures have been the subject of movies designed to give an audience thrills. Titles like Them (1954), Tarantula (1955), Kingdom Of The Spiders (1977), Arachnophobia  (1990), and others prove the point that movie creators have long known that films featuring these creatures have box office appeal. In my opinion, Eight Legged Freaks outdoes them all regarding depicting a scary scenario involving our eight-legged friends.

Eight Legged Freaks introduces its antagonists first with an opening segment of exposition that tells the viewer what to expect later in the film by educating us on the varieties of spiders it plans to use in its content. They include trap door spiders, jumpers, weavers, and hairy tarantulas.

Not long after, Eight Legged Freaks introduces its main characters and their relationships while coincidingly establishing the location of the film’s events. Prosperity is s sleepy little ex-mining town is in the middle of nowhere, located in the desert of Arizona, the type of location favored in many fifties sci-fi ‘B’ movies. It’s a town populated by stereotypically not-very-right rednecks except its solitary black resident, the local radio talk show host, and resident conspiracist. The film’s narrative starts out depicting a plurality of seemingly disparate storylines but weaves the multiple storylines into a neat little satisfying package during the film’s duration leading to a nicely wrapped package of a finale.

Not familiar with this title? Eight Legged Freaks (originally titled Arach Attack, under which it got released in some parts of Europe and other countries worldwide) is a 2002 monster comedy action film directed by Ellory Elkayam and starring David Arquette, Kari Wuhrer, Scott Terra, and Scarlett Johansson. The plot follows a colony of spiders exposed to toxic waste, causing them to mutate into gigantic, monstrous creatures that attack a small American mining town.

For the most part, the cast is enjoyable in its portrayal of broadly painted and cliched characters. The film’s leads do a good job getting us to care about them. The film features a very young Scarlett Johanson and several recognizable character actors who are professionally competent in their roles.

Eight Legged Freaks does not waste much time getting down to business. The action, which starts not long after the film begins, starts with random attacks that soon continuously escalate into an all-out war with the film’s army of gigantic CGI spiders. In the usual manner of horror films, the film generates most of its suspense based on who will survive and who will not.

I guess it’s no secret by now; I genuinely enjoy this film. It’s a great popcorn movie that works well as an often amusing tribute to the atomic age of science fiction movies from the past mid-century; it’s a thrill-packed and fun-filled ride.