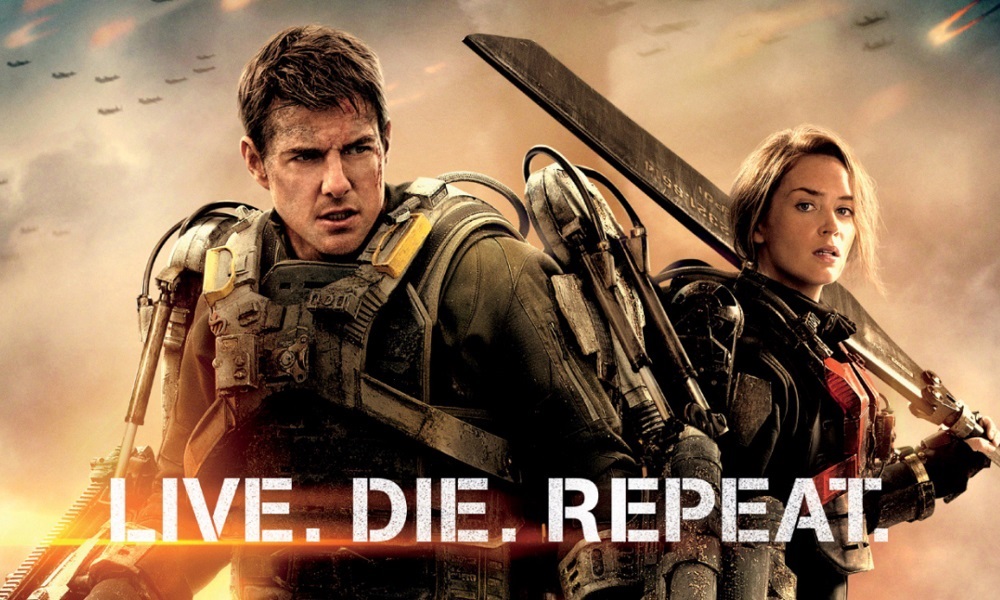 BORN AGAIN HARD: A REVIEW OF THE EDGE OF TOMORROW (2014) D.V.D. SANS SPOILERS

Edge of Tomorrow (2014) features a near future in which mainland Europe has been invaded by alien creatures from a meteor that crashed outside Hamburg, Germany five years earlier.  “All of humanity’s at stake” and has suffered millions of casualties but recently, finally won its first victory.  This victory in Verdun, France—due to a “revolutionary new” combat exoskeleton and a soldier named Rita “Angel of Verdun” Vrataski (Emily Blunt) wearing one to kill hundreds of aliens “on only her first day in combat”—inspires the United Defense Force to adopt a bold new strategy.

This new strategy, based upon the UDF’s new belief that it has contained and can defeat the alien invaders, is to surround them with the “entire might of the UDF” invading from Scandinavia, France, and the Mediterranean and the Russian and Chinese forces on the Eastern Front.  But because heavy casualties are expected, the commander of the UDF orders Major William Cage (Tom Cruise)—who handles media relations for the U.S. Army and “inspired millions of people to join” the UDF—“to sell the invasion” by joining the first wave with a camera crew on the beaches of Normandy. 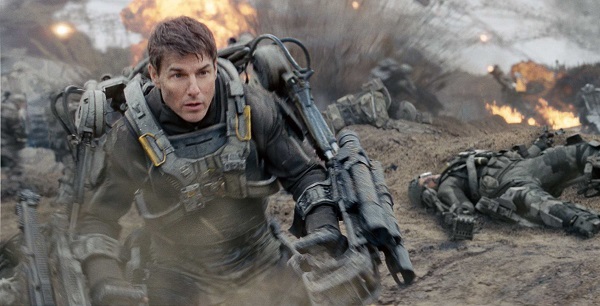 Cage, who “can’t stand the sight of blood, not so much as a paper cut” and is “not a soldier, really,” politely declines.  And when the general pulls rank Cage threatens to use his position to turn the public against him “when the body bags come home and they’re looking for someone to blame.”  So the general has him arrested, busted down to private, and shanghaied into participating in the invasion of France—as an exo-suit-wearing member of the J squad.  Cage (surprisingly) kills several aliens but dies when he’s burned up by one’s blood—and then restarts the day…every time he dies.

Obviously, rebooting the day while retaining his memories of how he lived it all the previous times allows Cage to improve his skills and strategy as if he were playing a video game with multiple lives multiple times.  (The author of the Japanese YA SF novel upon which the movie is based says he got the idea for it from playing video games.)  And just as obviously, this rebooting also creates a saṃsāra-like cycle of life, death, and rebirth in which the protagonist can become a better person as it does in Groundhog Day.  But this pulpy, juvenile SF premise isn’t what makes the movie so good.

What does make the movie so good is how it handles the premise, using it and not taking it too seriously.  Bill Paxton, who played the hysterically histrionic Private Hudson in Aliens, almost steals the show as the cheerfully chastising Master Sergeant Farell, commander of J squad.  But he doesn’t because Cruise shed his smarmy, self-serious douchebro persona to give a more understated performance.  His Cage is likeable even when he’s entitled and cowardly early in his redemptive character arc and has an undercurrent of loopiness that makes his transformation into a warrior credible. 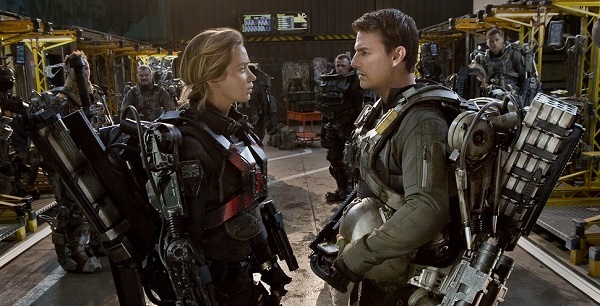 Also credible is Emily Blunt as the legendary “Full Metal Bitch” who makes Sigourney Weaver’s Ripley in Aliens look like Veronica Cartwright’s Lambert in Alien (1979).  And as are the Colonial Marines in Aliens, the soldiers of J squad are established economically with distinct, colorful personalities.  In fact, Edge of Tomorrow is about as good as Aliens and provides copious thrills and chills as well as wringing as many laughs out of its death/rebirth time loop premise as Groundhog Day does.  And its visual effects and Doug Liman’s directing are seamless and stunning.

Yes, there are imperfections.  The movie’s expository opening, a rapid-fire montage of news clip fragments, is chaotic and muddled; a brief, clip-supported interview with Cage about the invasion, the turning point at Verdun, and the impending Operation Downfall would’ve been better.  It’s a little odd that none of the soldiers recognizes Cage from TV.  And the movie’s visual style is perhaps just a tad too dark and gritty for its tone.  But these are nitpicks.  Edge of Tomorrow isn’t profound or philosophical SF, but it’s as fun and funny as Paul Verhoeven’s RoboCop (1987) and Total Recall (1987).

D.V.D. EXTRAS:
⦁ “Weapons of the Future”: This featurette focuses upon the soldiers’ “exo-suits.”  In the movie, these combat exoskeletons carry weapons such as machine guns, grenade launchers, and railguns and physically augment the soldiers.  In the making of the movie, the suits, which “weighed anywhere from 80-85 to 120 pounds depending on the armament,” were dead weight to be carried by the players.  The cast “had to start working out in July for a shoot that started in October to physically be strong enough to wear one of these suits all day.”  They “worked with a physical trainer…in the exo-suit costume.  And they had to make the costume look like the costume was powering them, whereas in fact they were powering the costume.”
⦁ “Creatures Not of This World”: And this featurette focuses upon the alien invaders.  “It’s always difficult to … do something very unique and original with aliens,” but the Edge of Tomorrow team did, using illustrations, models, and animation movement studies.  The creatures are masses of intertwined tendrils that can move “in any direction” and have internal light like “molten lava” that “travels down the tentacle that’s being whipped out and then is released out the end and becomes a six-foot, red-hot javelin.”  Unlike the exo-suits, the aliens were CGI, so “the camera guys [didn’t] have something to frame up on” and the players had to go by “eye lines” and “guys wearing these special effects green-screen suits” “holding sticks with lights.”