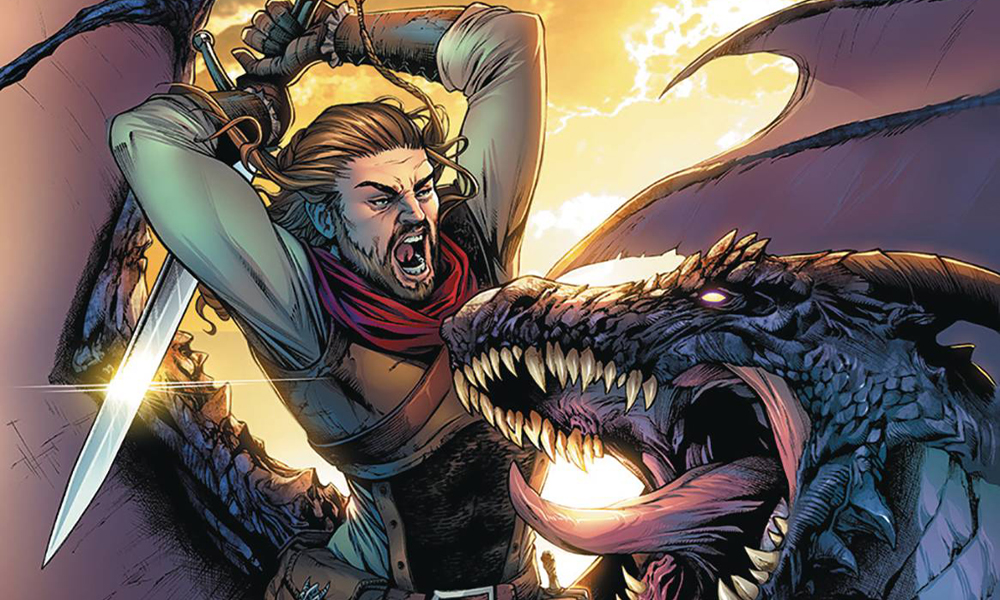 Enthrallingly fixed upon the Volsung Clan’s seemingly eternal task of slaying the dragon, Fafnir, Nick Bermel’s storyline for Issue One of “Dragonsblood” contains plenty of sense-shattering, swashbuckling swordplay, whilst simultaneously managing to avoid the age old trap of not making this fantasy comic’s sole protagonist either a super-human fighter or some world-weary, smart-thinking adventurer who is so experienced that their fights are practically over before they’ve even begun. Indeed, Sigurd, “the last of his clan”, is actually portrayed as the least able member of his family, being both a poorer marksman with a bow and physically weaker than his ill-fated older brother; “I hope you are being modest, or else this shall be a bore.” 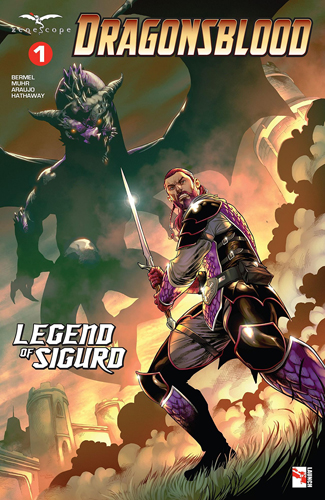 Equally as engaging as the evident fallibility of his hero, is the “Grimm Tales of Terror” author’s emotionally-charged ‘flashbacks’ to the dragon-slayer’s long-dead relatives and their determination to rid the world of their “terrible foe” so that their loved ones won’t have to face the ancient, all-powerful wyrm. Initiated each time Siggy stumbles across either the skeletal corpse or piece of well-worn garment which once belonged to his kinfolk, these wonderfully warming interludes really help demonstrate to this comic’s audience just how much historical heart-break has been heaped upon the shoulders of the young warrior, and provide plenty of relatable rationale as to just why “the last of Sigismund’s line” so hates the legendary creature he is stalking.

These days it is hard not to compare all dragons, talking or otherwise, with that of J.R.R. Tolkien’s “most specially greedy, strong and wicked worm” Smaug, and sadly, the striking similarities between Fafnir and the destroyer of Erebor is debatably this twenty-two page periodical’s sole disappointment. Admittedly, Bermel’s beast has only one good eye and is seemingly ‘protected’ by an array of far smaller, formidably-fanged draconians, but it still rather unimaginatively has a small bare spot in its heavily-scaled underbelly which makes it susceptible to the strike of a well-timed bladed hand-weapon.

Besides its prodigious penmanship, “Zenescope’s newest series” also contains some impressive penciling by Jason Muhr, whose clean-lined look to the breakdowns makes it abundantly clear just why this book’s writer “bugged Dave (our head editor) to reach out to Jason to see if he would work on it” just as soon as “Dragonsblood” was approved. Sigurd’s all-too brief battle with the dinosaur-like guardians of Fafnir’s inner sanctum proves especially pulse-pounding, as does the breath-taking impact of the wyrm’s bloody blows upon its would-be killer during their cataclysmic confrontation.