“I don’t really think that very much is interesting about the superhero as an archetype.” — Alan Moore

“Famously, there’s not really anywhere to go after nihilism.  It’s not progressing toward anything, it’s a statement of outrage, however brilliant.” — Alan Moore

Alan Moore, arguably the most prominent member of the “British invasion” of comics in the late 1980s, is the medium’s counterpart to science fiction (SF)’s Philip K. Dick.  (After all, Dick showed the signs of schizotypal personality disorder, had a countercultural sensibility, and wrote philosophically profound and psychologically insightful books for one of literature’s “ghettos.”)  Moore’s the closest thing the comics medium has ever had to a literary genius, and his 1980s graphic novels V for Vendetta and Watchmen come the closest to fulfilling John Updike’s vision of a “comic-strip novel masterpiece.”

Actually, they do fulfill it, especially Watchmen (1986-1987).  It’s not only the only graphic novel to win SF/fantasy’s annual Hugo Award but also the only graphic novel to be included in Time magazine’s list of the 100 best English-language novels published between 1923 and 2005 (!).  Like a Trevanian novel, Watchmen is simultaneously a superb work of genre fiction, a sophisticated parody of the conventions of that genre, and a work of literature.  Within its superhero story is an existential novel that itself acts as a Trojan horse for Alan Moore’s neo-Marxist/nihilistic/anarchistic political beliefs. 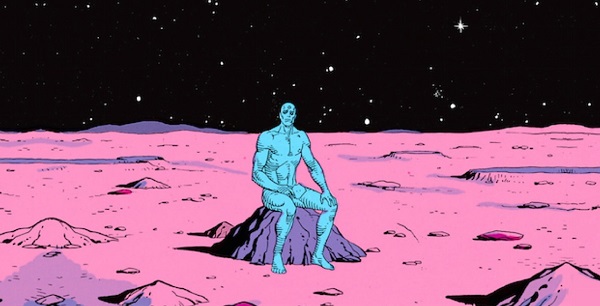 Watchmen takes place in an alternate 1985 in which the existence of a superhero with godlike powers (“Dr. Manhattan”)—in addition to the presence of superheroes without superpowers—resulted in airships and electric cars being prevalent, Richard Nixon still being President of the United States, and the Cold War much closer to becoming hot.  But Adrian Veidt, a.k.a. “Ozymandias,” a former costumed vigilante who’s “the world’s smartest man,” ends the Cold War and prevents a nuclear war by faking an alien invasion to force a pragmatic political alliance between the USSR and the USA.

(Coincidentally, in September 1987, just after the final issue of Watchmen was published, then-President Ronald Reagan said in a speech before the United Nations General Assembly, “Can we and all nations not live in peace?  [W]e often forget how much unites all the members of humanity.  …  I occasionally think how quickly our differences worldwide would vanish if we were facing an alien threat from outside this world.  And yet, I ask you, is not an alien force already among us?  What could be more alien to the universal aspirations of our peoples than war and the threat of war?”)

Because Alan Moore had grievances with Watchmen’s publisher, DC Comics—some legitimate, most ludicrous—he had nothing to do with either the 2012 Before Watchmen prequels or this sequel, which deals with the consequences of Veidt’s scheme having been exposed and Dr. Manhattan’s having meddled in the DC superhero universe after leaving the Watchmen one.  Doomsday Clock begins seven years after Watchmen concludes and features the USA hunting Veidt (whose faux alien invasion entailed murdering nearly the entire population of New York City) and Veidt hunting for Dr. Manhattan. 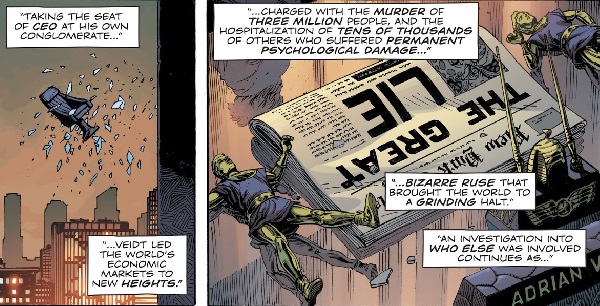 (Doomsday Clock features also Robert Redford as President of the United States, which continues a joke from the end of the final issue of Watchmen in which a character calls Robert Redford’s announcing he’ll run in 1988 absurd: “Who wants a cowboy actor in the White House?”  This dig by Moore at Ronald Reagan is highly ironic* because only a few years after Watchmen was published the Soviet Union collapsed as planned in the Reagan Doctrine.  The Cold War was won because Reagan chose the strategy of “peace through strength” over Richard Nixon’s policy of détente, or easing of tensions.)

The USA’s renewed tensions with Russia make Watchmen relevant again, and in the modern-day DC superhero universe these tensions have been exacerbated by “The Supermen Theory,” a foreign-born conspiracy theory that 97% of the world’s “metahumans” are American and didn’t begin appearing until Superman’s arrival because the US government secretly created them.  This is an obvious analog to the USSR’s feeling threatened by the USA’s superhero superweapon, Dr. Manhattan, in the original Watchmen; and Veidt calls it “the Dr. Manhattan problem a hundredfold.”

Doomsday Clock’s writer Geoff Johns tries to make it even more relevant by framing Veidt’s planned world “utopia” in terms of globalism (“One world. One accord.”) and referring to North Korea being “capable of reaching as far inland as Texas,” Americans breaking through “the wall” to escape to Mexico (!), and the survivors of Veidt’s “alien invasion” being rounded up and interned for security reasons.  And he makes the DC superhero universe even more like the Watchmen one with anti-Batman protests that echo the “Badges Not Masks” anti-superhero riots in Watchmen. 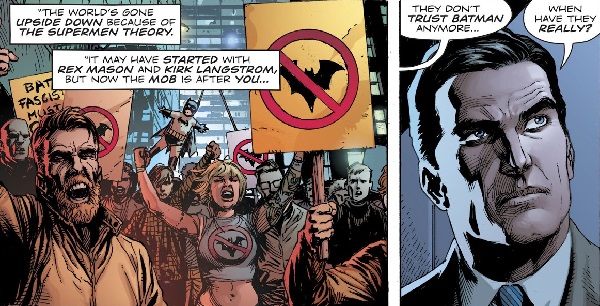 Johns also copies the storytelling style and structure Alan Moore created and used for Watchmen—grid page layouts, motif panels, match cuts, overlapping narratives, etc.—but doesn’t use it to good effect.  (But of course it didn’t work when Moore himself used it again for his Batman: The Killing Joke, either.)  Moore used it to portray Watchmen’s fictional universe as an interconnected whole and force the reader to be active rather than passive in perceiving it.  In contrast, Doomsday Clock’s two fictional universes feel disjointed and incomplete and don’t pull the reader into them.

But of course Doomsday Clock wasn’t intended to continue Watchmen.  In fact, in a way it was intended to do the opposite by pushing back the darkness in the DC Universe.  Alan Moore and Dave Gibbons’s Watchmen is considered one of the main culprits in sparking the “grim ’n’ gritty” movement in superhero comics, which featured the extensive sex, violence, and psychiatric disorders of truly mature comics such as Watchmen but not their thematic and narrative sophistication—much to the regret of Moore and also Frank Miller, who made Batman “grim ’n’ gritty” in The Dark Knight Returns (1986).

Alan Moore said that what he “most regretted about Watchmen [is that what he] saw as a very exciting celebratory thing seemed to become a kind of hair shirt that the super-hero had to wear forever after[:] they’ve all got to be miserable and doomed.  That was never what me and Dave intended.”  Of course that didn’t stop DC from making its superheroes wear hair shirts and in 2011 putting its entire superhero universe in a hair shirt with “The New 52” reboot of its entire line.  But the DC superheroes sans happiness and hope didn’t appeal to readers, and so the reboot was renounced. 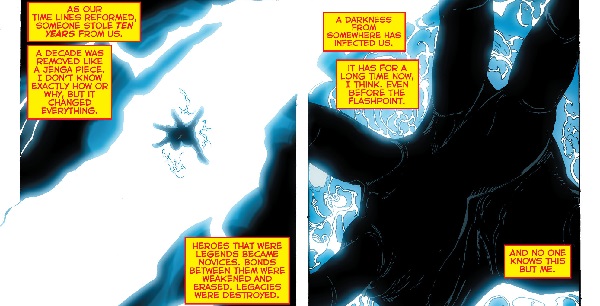 It was repudiated in the 2016 “DC Rebirth,” which restored the old continuity while retaining the new one by making the “grim ’n’ gritty” reimagining the doing of Dr. Manhattan.  Geoff Johns implied this in his DC Universe Rebirth and will deal with it in Doomsday Clock with “a conflict between optimism and pessimism, a battle between the very forces of hope and despair,” personified by Superman and Dr. Manhattan, respectively.  Johns has said that this conclusion to the “DC Rebirth” storyline is the most personal and most epic, utterly mind-bending project [he has] ever worked on.”

But Doomsday Clock doesn’t come close to being “epic” or “utterly mind-bending.”  “The Supermen Theory” and the origin of the new Rorschach are very clever ideas, but the plodding story has little thematic depth or complexity.  And its only significant emotional resonance is provided by the new Rorschach and former Minuteman Byron “Mothman” Lewis in issue #4 and Marionette and Mime in issue #6.  Furthermore, Gary Frank’s solid penciling is tarnished by Brad Anderson’s dull, scritchy-scratchy inking style and the earth tone color scheme de rigueur for DC Comics’s “mature” titles.

Doomsday Clock is a better-than-average comic book but still disappointing, even when not compared to the brilliant Watchmen.  But even though it’s not a proper sequel to Watchmen, one can’t help but compare the two.  Its Comedian is virtually identical to Watchmen’s, but its Veidt is mishandled and actually seems a little dumb.  (Lex Luthor even insults him, “If you’re the smartest man on your planet, I’d hate to meet the dumbest.”)  So reading Doomsday Clock is like listening to a garage band cover one of The Who’s greatest hits: it brings back fond memories but frustrates rather than fulfills.