Doctor Fate returns to the DC Comics Universe in Doctor Fate: The Blood Price, a trade paperback which collects issues #1-7 and DC Sneak Peek: Doctor Fate #1. Now, I have always had a great affinity for DC’s Golden Age heroes and Doctor Fate is one of my most favorite. This series represents a new version of the character and while I am not a fan of revamps to characters, Fate is one that has undergone a number of changes over the years since his original incarnation as Kent Nelson in the 1940s. Many different characters, including Kent’s wife Inza, have come into possession of the Helmet of Nabu, and thus possessed the powers of Fate. 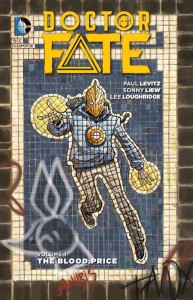 The latest is Khalid “Kent” Nassour, an Egyptian-American medical student. Khalid’s father, who was also a doctor, gave up his own career to try to give his family a better life in America where he now works as a cab driver in Brooklyn. Khalid seems to be like any other college student until the day his cat starts to talk to him. The cat claims to be an incarnation of Bastet, or Bast, an Egyptian Goddess. She tells him that she has chosen him to carry the mantle of Fate to defeat Anubis, God of the Dead, who wants to destroy the Earth in a cataclysmic flood. He is given the helmet of Fate/Nabu/Thoth…the only problem is that there were no instructions.

Much of the meat of the book centers on Khalid’s initial disbelief and self-doubts about how a college kid like him can hope to defeat an angry Egyptian deity. The fact that he is given the helmet without any training only makes things worse. However, Khalid’s apprehension soon falls by the wayside when his own father is attacked and hospitalized after an attack by Anubis. Khalid has no choice but to accept his “fate” and protect the world.

Longtime writer Paul Levitz has reconstructed a character that is not only steeped within Egyptian mythology but also is of Egyptian ethnicity. While it might seem like a move for political correctness Khalid’s Egyptian heritage plays deeply into the story and is a key element of why he was chosen by Bast. Levitz pulls this off without being heavy-handed and gives us a character we can empathize with and to whom we can relate. Levitz is one of the true old school pros of comic book scripting, starting at DC in 1972 at the age of just 16. He made a name for himself during his run on Legion of Super Heroes along with Keith Giffen, produced “The Great Darkness Saga”, one of the best known Legion stories. No one has been at DC longer or knows their characters better than Paul. 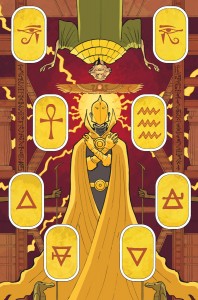 Another point I loved about this story arc is that it stood on its own merits. Levitz didn’t toss in other guest-star heroes just to make for cheap appeal. Khalid’s eventual acceptance of his role plays out over the full seven issues and while it at times can be slow it’s also refreshing to see actual character development in a new series as too often writers go overboard trying to hook fans in the first few pages of the first issue. Hopefully Levitz will keep Fate out of the spotlight of the DCU for a while and continue to let the character grow.

Sonny Liew’s art is quite…different. He employs a jittery, cartoon style of artwork. These are not the bold, powerful lines of people artists like Jim Lee. Khalid appears perpetually thin and shaky. While I prefer a more traditional, photo-realistic style of art, in this setting, with the many fantasy and mythological elements, his art works quite well. In fact, I would go so far as make comparisons to Steve Ditko’s psychedelic work on Doctor Strange in the 1960s.

Doctor Fate isn’t a character who has done well in his own solo series over the years but hopefully this is a new era for his fans.