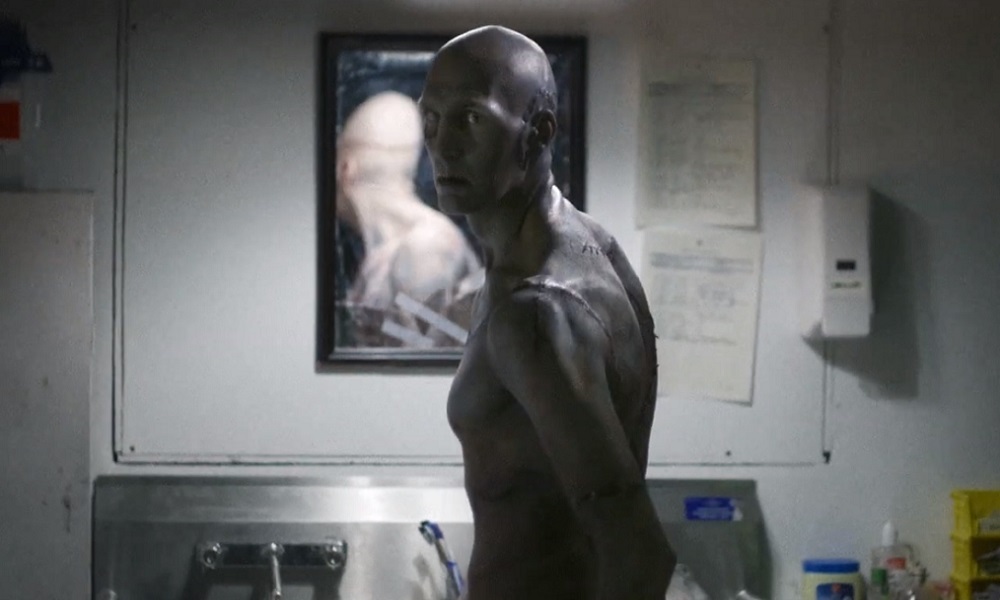 Ever wanted to see hipster Frankenstein? 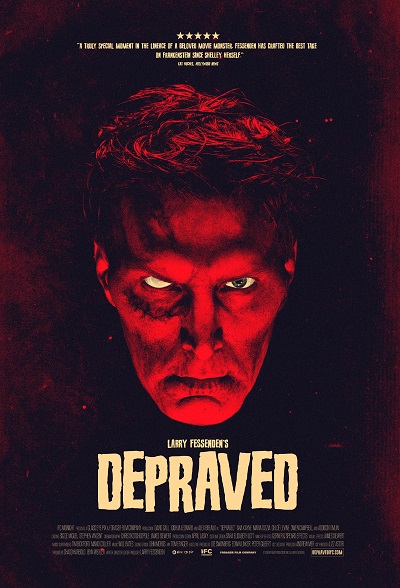 Depraved is that in a nutshell: the angst and narcissistic hedonism of a cynical zeitgeist attempting to recapture the horror and philosophic depth of a classic nightmare. We’ve got constant swearing, nudity, technophilia, waffling about politics, constant griping about feelings and really lousy pop music leaning uncomfortably against the profound story about life, death, and loyalty.

Ironically the term and title ‘Depraved’ implies a deviation from the normal, an attitude or decision counter to morality. Nowadays it seems difficult for filmmakers to picture anyone with pure motivations in a traditional sense so what is depraved in a world that is simultaneously seen as hopeless…but also unforgivably corrupt because of how it stifles the hope everyone deserves?

This quagmire of subjectivism practically drowns the film from the word go. Our introduction to the transcendent love story that will supposedly echo throughout the rest of the story is two people having sex and then having an argument about not wanting to have children. Truly a romance for the ages.

It all plays into the weirdly naive collision here between desire for some kind of stability and truth, but also not wanting to believe in either because those are the relics of the past, man. Rules are for squares like evil business people. We’re the hip new century that doesn’t believe in anything but partying guilt free. When we aren’t stewing in drama and existential terror of course. And ultimately we’re left with the same old tropes. Impotent young rebellion against evil adult greed.

Apart from the more irritating trends of contemporary independent filmmaking, Depraved is really quite a gorgeous film. Beautiful subtle use of coloration, inventive and creative camerawork, seamless and smooth editing. The stop-motion style disorienting dream sequences especially catch the eye and ensnare the mind. This is a stellar example of a small budget hardly mattering in a day and age where even smaller projects can be polished to theatrical sheen in post production. Some people overuse this gimmick, but Depraved has true skill and spark behind the camera.

The acting too is incredible for a bunch of largely unknown younger performers. The monster, Adam, himself is spectacular: a graceful and jittery, emotionless and passionate conflict personified. And the effects…amazing. The makeup, the digital work. It’s easily on par with anything a big budget studio could manage but with far more experimentation at work and innovation. I love the overlay of drifting cells, like afterimages in someone’s eyes after a bright light strikes them.
The writing as mentioned is really the only stumbling block. Apart from the modern malaise the real killer of the atmosphere and craft here is the hilariously overwrought script.

It’s not enough that something reflects or references something else, except that the characters state in no uncertain terms exactly what the script is referencing. The film comes to a complete halt more than once for the screenwriter specifically to indulge in their own genius. Example…I thought it was clever that the Frankenstein analogue character in this film was called Henry, not Victor. It’s a play on the original Universal Frankenstein films calling the mad scientist Henry instead of Victor as he was known in the original Mary Shelley book.

It’s a nice in-joke and it helped to make Depraved seem like it was both aware of it’s own origins but still interested in creating it’s own identity. That is until characters LITERALLY start hashing out the connections they share with Frankenstein and one character says in as many words “Henry…not Victor! Like the movies, not the book!”
It was needless, it make it seem like the writer considered the audience to be stupid, and it wasn’t the only example of exposition hammering in the themes and ideas so ungraciously it made the nuance of the film itself pale in comparison. There’s even some flat out wonky scenes like one character claiming that being a war doesn’t make you ready for conflict. I…think a lot of people would disagree.

Another pass at the script and this could have been a brilliant update of the original tale. A Frankenstein adaptation for a modern era had a lot of potential, bringing up truly controversial but fascinating questions about the meaning of ‘life’ as a concept, what it means to be human, how far are the limits of science when it abandons all conventions?
But all that Depraved ultimately offers unfortunately is film-school style monologues about how the Iraq War was bad, pharmaceutical companies are evil, modern America is awful, and nobody actually cares about anyone but themselves. It’s not profound because in the end there’s an attempt to paint someone who decides to ‘stop caring’ as some kind of hero. So selfishness is wrong…but also the only way to survive in a horrid life? It makes no sense, and it boils down to contradictions existing because of a poorly considered personal philosophy. You can’t be both pragmatic and romantic.
Mary Shelley knew this, and story was partially about romantic notions running full tilt into pragmatism and dissolving. Depraved tries to have it both ways and stumbles.

Consider watching this film on mute. The sumptuous set design, acute performances, marvelous ambience will all be there to enjoy, and every few minutes you won’t be rolling your eyes at the pretentiousness.