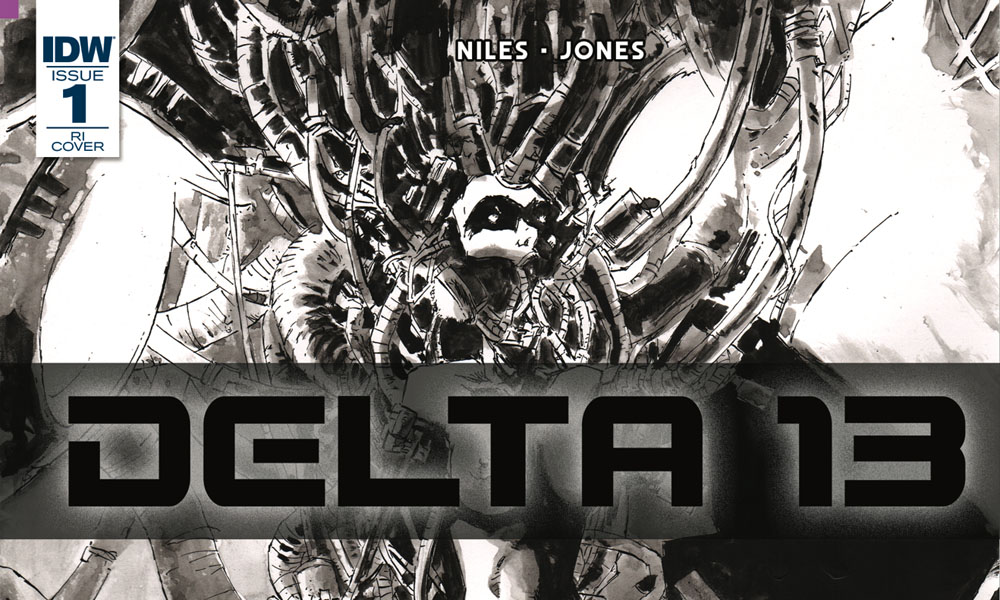 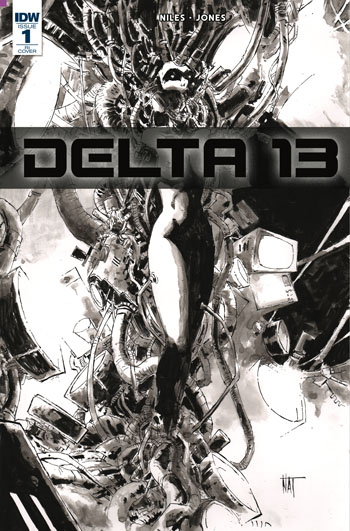 rock for the Home Office, it is almost impossibly hard for anyone who is familiar with Twentieth Century Fox’s “epic science-fiction horror media franchise”, “Aliens”, not to subliminally hear composer Jerry Goldsmith’s Alien Suite in their heads whilst reading this comic. For whilst little in the way of action or horror actually takes place within this “IDW Publishing” title’s opening instalment, Steve Niles’ narrative for Issue One of “Delta 13” undoubtedly captures all the tension and atmosphere of Ridley Scott’s first critically acclaimed film by presenting a seemingly bored band of ship-mates dutifully going about their day-to-day business in deep space before encountering “a mysterious, huge, and previously undiscovered asteroid…”

Indeed, the New Jersey-born writer’s treatment for this twenty-page periodical is so adept at imitating the palpably jaded ambiance on board the USCSS Nostromo, that every time a computer screen sputters into life within this publication and subsequently throws its user’s face into sharp relief on account of its glowing screen glare, one can simultaneously recall the M-Class star-freighter’s iconic-sounding boot-up sequence and computer interface clicks; “Guys, I’m getting some strange readings over here. I’m getting something which shouldn’t be there – namely heat signatures.”

Ordinarily, such parallels to so obvious a big ‘silver screen’ influence might draw some criticism regarding the American author’s script lacking any of its own innovative originality, especially as the vast majority of its plot remains firmly housed within the confines of the spaceship’s sedentary cockpit. However, that simply isn’t the case on this occasion, as the tiny survey vessel inevitably steers clear of Dan O’Bannon’s screenplay by losing itself within one of the planetoid’s many tunnels rather than “going… smack right into it” and discovers an artificially built “wall of some kind” buried deep beneath the surface. In fact, if anything, Niles’ reverential replication of the commercial towing vehicle’s vibes actually adds to his enthralling, increasingly taut tale involving “a terrifying threat unlike anything they’ve ever seen.”

Regrettably, such praise cannot arguably be similarly heaped upon the artwork of Nat Jones, whose scratchy, somewhat uncontrolled pencilling style debatably imbues many panels with a tangibly unfinished feel, as if the one-time Instructor at the Guru Digital Arts College ran out of time to do anything more than provide rough storyboards for the comic. Admittedly, there can be no doubt that the “Hope: New Orleans” colourist conjures up a tremendously formidably-looming asteroid for this book’s cast to confront, but some bibliophiles will undoubtedly wonder just how much better this magazine might have looked had its creator instead utilised the skills of his “frequent… collaborator Ben Templesmith.”