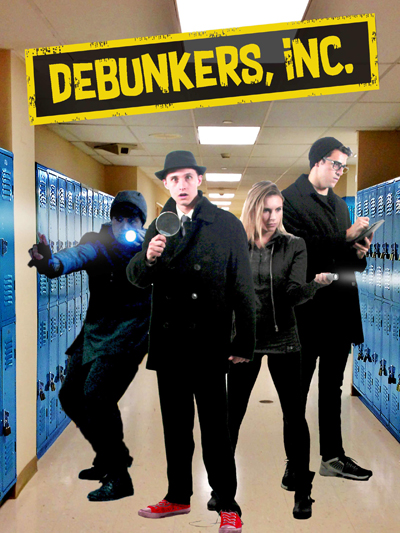 The main characters are called Dr. Mario, Link, and Solid Snake.If you just rolled your eyes, get ready to do that a lot throughout Debunkers, Inc. This is not so much a parody as it is a situation comedy episode without a laugh track. In a similar fashion the film veers drunkenly between twee dialogue exchange and completely irony-free family drama. Maybe this is a problem unique to me but when part of your film is based on the feature taking place in an unreal universe (give how goofy the conversations are and how purposefully silly the situations become) and the other part expects you to fully buy into the solemnity of relationships, worries, and fears…it just doesn’t quite mesh.

If you’re going to be a lark I personally believe you need to focus on the funny. If you want drama in your comedy it CAN work, but there needs to be a rock solid down-to-earth foundation to keep the focus on the characters being people instead of just dispensers of quips and pratfalls. This is not a simply or easy balance to achieve, and Debunkers Inc is not the first nor will it be the last film to either not try to find that happy medium or try and fail to achieve it.

At least everyone is having a great time hamming it up to the hilt. Even bit parts mug and snarl through their lines with gusto if not exactly credibility. The film is shot competently and has a lot of nice production flourishes to make it feel more expensive than it most likely was. The music especially is so on point and nostalgic, garnishing everything with the sensibilities of a 60s to 80s Scooby-Doo style romp. Downside to this is the proceedings just can’t live up to the thematic score. Sometimes the technology seems to fit the tone (like cassette players) but other times there’s references to the video game Super Smash Bros. and internet video sites which are both ostensibly modern. Ever props wise Debunkers is confused.

If you’ve seen a film before this one you already know the plot, in fact spoofing ghost hunters is already at this point practically a genre itself. You have your misfit underdog crew of mystery solvers and their attractive intern who seems to exist to roll her eyes at their antics and faux-clever patter. They undertake an ominous investigation to look into the curse of a murdered student which will pit them against more than their usual brand of schoolyard shenanigans.

For a film that scoffs at the cliches of cinema as a joke, it plays so many tropes completely straight. Flashbacks are in black and white and include fourth wall breaking when done from the perspective of delusional characters. People don’t talk like humans having conversations so much as characters in a play reading from a script and projecting all the while. Actors trying to portray themselves lying or being purposefully aggrandized is completely indistinguishable from their usual hokey selves.

The cast across the board all have at most two aspects to their personality, and these are the notes they play over and over again. You have the game/occult obsessed guru goth, the fedora clad smarmy leader, the nerd (and everything that entails) the aforementioned disapproving female voice of reason. It would actually be funnier if these characters were played MORE straight-faced rather than exaggerations of exaggerated stereotypes.
Some of these can be amusing but none of them are unfamiliar.

You have to hand it to these enthusiastic and dedicated youngsters setting out for themselves, but that doesn’t mean they do the job incredibly well. It’s cute and it’s pretty wholesome. That much can be said.
I can imagine an audience for this production easily, from the pretty graphics to the wacky characters, but better options for both exist. Principally it’s easy to believe the prime audience for Debunkers is probably the family and friends of the cast and crew, which is no horrific crime. As a mainstream comic romp its amusing, but from a critical standpoint it could have used a little more subtlety.As if the emphasize this the conclusion is one of the loudest sequel pleas in history.