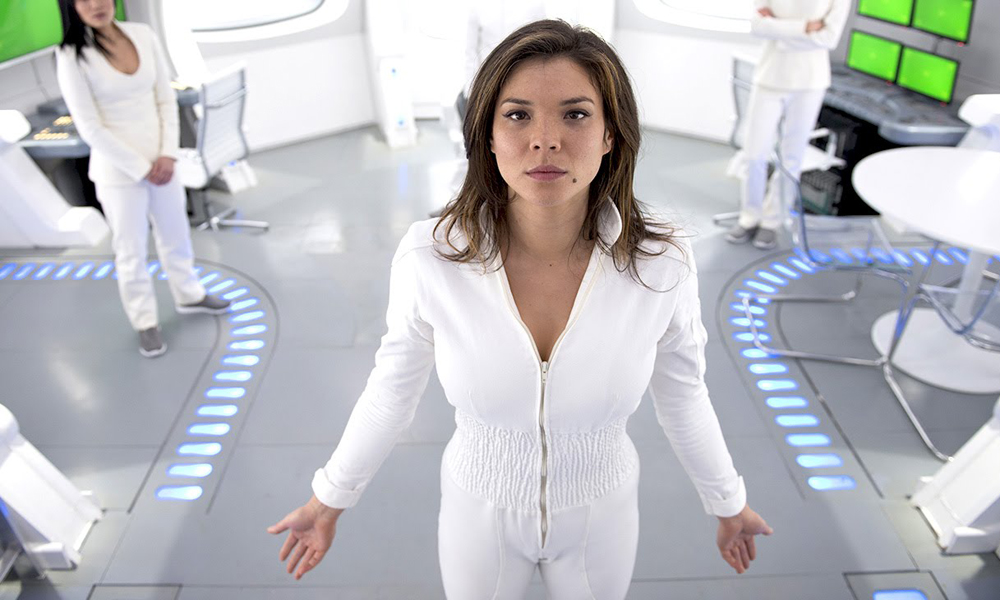 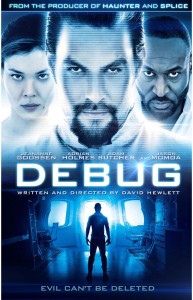 Debug is a Sci-Fi/horror film culled together from far better films such as Event Horizon, Tron, and 2001: A Space Odyssey.  In 2047, six young criminal computer hackers are sent to an abandoned space freighter as part of a prison release program.  They are tasked with debugging the ship’s computer network and rebooting its systems.  Unfortunately for the hackers, the ship’s security A.I. has no intention of being shut down.  Jason Mamoa plays the voice of the psychopathic security software, calling himself, “I am”, a bio-organic system that will do everything in its power to stop the hackers.

Although it is set on a mammoth freighter the film has the feel of a haunted house type film where the group breaks up to each explore the setting on their own, leaving them vulnerable to influence and attack.  First to be targeted is the group’s prison supervisor, Capra (Holmes).  A drug addict, Capra attempts to use the ship’s pharmaceutical station to get his fix.  However, I Am takes controls of the automatic injection system, pumping Capra full of chemicals which turns him into a homicidal maniac who feels no pain.  As Capra begins to stalk the hackers, each of the group is encountering I Am on their own in the form of holograms or within virtual reality programs where it can play on their fears and insecurities.

There is little attempt made at character development.  We learn almost nothing about the characters except for James who took a hacking rap for his younger brother who has Down syndrome.  The rest of the characters are strictly two-dimensional cutouts just there to fill space until their demise.  The most intriguing member of the group is Kaida (Goossen), the lead programmer.  She is the toughest member of the group, physically and mentally.  Eventually Kaida sends a computer version of herself into the network to battle I Am meanwhile she and James search for the ship for I Am’s bio-organic form to shut it down once and for all.

Writer/Director David Hewlett, best known for his work in front of the camera in shows such as Stargate SG-1 and Stargate Atlantis, teases viewers with several interesting tidbits but he never follows up on them, leaving them dangling.  These involve who created I Am in the first place and what was the abandoned freighter carrying?  These intriguing questions unfortunately are never answered.  It’s stated that bio-organics is strictly military grade stuff, hinting at some sinister purpose of the ship and it’s AI.  It’s a shame that Hewlett didn’t explore these points in more detail as they are frankly more interesting than the standard hunt and kill horror plotline.

Jeananne Goossen is the highlight of the film.  She is tough, strong, and intelligent and owns every scene that she is in.  This was a very different role for Mamoa who is known for his roles that are heavy on action.  He’s asked to do little of that here but is sufficiently menacing as the antagonist.  While Debug presents some interesting ideas it never fully embraces them and instead is satisfied with being a run-of-the-mill horror flick.