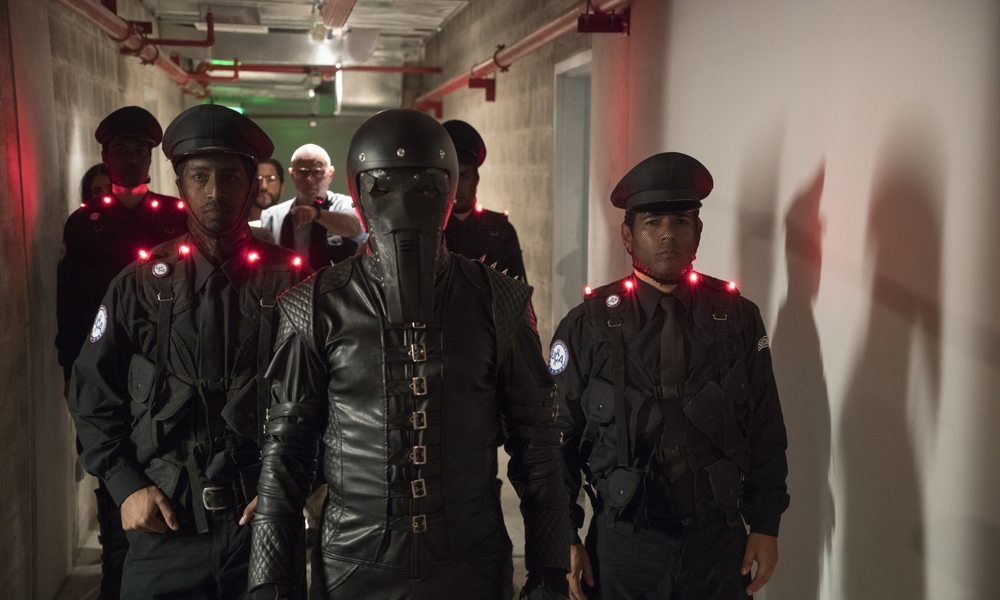 I must confess: the world probably doesn’t need another Death Race 2000. The 1975 original was, um, perfect – you know, in a skeezy grindhouse Roger Corman-y way – and while the Jason Statham remake lost the satirical punch, it at least had the self-respect to film some actual car stunts in compensation.  With those in hand, we can easily fulfill all of our needs on the Death Race front, and I’m sure real life will never go so horrifyingly, surrealistically off the rails enough to justify another…

Oh right. That thing that happened.

Death Race 2050 is, in many ways, a shot-for-shot remake of the original Death Race 2000. The beats hit at about the same time, the set-up and characters are remarkably similar, and while the grimy Z-movie sheen has been updated with shabby CG instead of shabby practical effects, it still feels like somebody tossed it out during a single adrenaline-fueled weekend.

Then again, to have any chance of enjoying this film, you need to love the original. And if you love the original, you know that most of what I mentioned up there constitutes a selling point. As for the rest – the iconoclastic tone, the cool cars, the crude-yet-undeniably-giggle-inducing  social commentary – it proves amazingly durable, and the new coat of paint on the sucker helps remind us of how distressingly pertinent it remains in our benighted 21st Century.

So yeah, it’s worth taking the ride again, as the blood sport of choice for the apocalyptic future we appear to be hurtling headlong towards once again. Death Race 2050 changes very little of the specifics: a quintet of cartoonish racers rockets from one end of the country to the other, trying to kill as many pedestrians as they can in the process. The brutish Frankenstein (Manu Bennett) remains the racer to beat, but TPTB – led by the sinister Chairman (Malcolm McDowell, and what would this party be without him?) who bears a suspicious resemblance to a certain pompadour-ed human hemorrhoid scar – has other ideas.

Beyond that, there’s nothing left to do but chow down on some Member Berries and enjoy the gasoline fire. Death Race 2050 succeeds the same way its predecessor did. It stays true to its stated purpose, it doesn’t outlast its welcome, and while first-timers would be well-advised to stick with the original, this one mines admirable nostalgia with its enthusiastic creative laziness. The jokes write themselves, the nudity remains cheerfully gratuitous, and stripper-bar hustle seems almost proud of the grease under its fingernails.

To do otherwise would be to pervert the spirit it hopes to keep intact. The 2008 remake edged closer to respectability, which truly has no place here. If you didn’t sign on for a grungy, dirt-smeared back alley cash grab, you clearly misread the Blu-ray box. And in the end, nothing else matters. The original endures because it captures something of the essence of Corman’s vibe: some little bit of scuzzy magic that shine on beneath the self-aware sleaze. The remake finds that same glimmer, digging a little deeper for it at times, but benefiting by following the same road map as its predecessor.

Of course, such exercises are almost pro forma these days, overtaken by the SyFy original movies (some of them Corman-produced themselves). But I’d be lying if I said this didn’t arrive right on time, and considering the stew we find ourselves in, its less-than-subtle mockery of this sad human existence touches the right notes at the right time. Don’t expect it to eclipse the original – assuming the original is your cup of tea to begin with, of course – but there’s still a surprising amount of gas left in this particular tank.

The image looks good – which isn’t necessarily a selling point – and the extra features are, well, less than special. Four behind-the-scenes features totaling about 30 minutes, and a handful of deleted scenes make the total package adequate in the extreme.