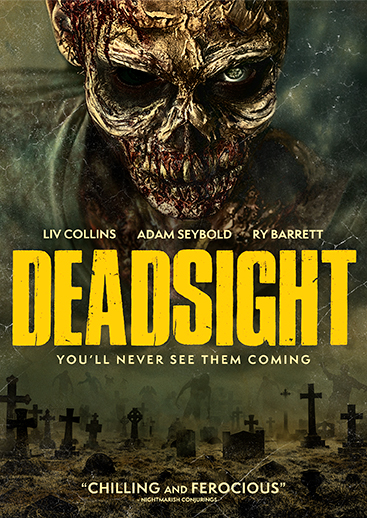 miniscule budget. In fact zombie films seem to lend themselves better to lower budgets. Big budget films with a lot of visual effects frankly haven’t been all that impressive as they tend to over rely on those effects. Director Jesse Thomas Cook clearly is taking a page from Romero in Deadsight. The film, like Romero’s Night of the Living Dead, is set in a small, rural town with a small cast and emphasis on atmosphere.

Ben Neilson wakes up handcuffed to a stretcher, in the back of an ambulance which has been abandoned along the side of a road. His eyes are also bandaged and he suffers from near total blindness. Managing to free himself from the cart he attempts to call of help on the Ambulance’s radio but receives to reply. It is then that he finds himself attacked by one of the paramedics who is now a blood-thirsty zombie.

Meanwhile, Mara is a local police officer who is also very pregnant. She hears Ben’s cry for assistance but loses her SUV when she encounters a woman who is infected by whatever plague has hit the town. The two find themselves stuck together at a deserted farmhouse. The pair have to work together to fight off the undead while trying to make their way back to the ambulance in the hopes of getting to safety.

The strength of Deadsight is in the two leads, Liv Collins (who also co-wrote the film) and Adam Seybold. They are in almost every scene in the film and it falls on them to carry the story. They do so and quite impressively. There is no forced bravado on their parts. They are just regular people in a terrifying situation looking to find their way out. Mara’s pregnancy and Ben’s near blindness forces the pair to rely on each other but also leaving them vulnerable.

Deadsight isn’t overloaded with zombies. There are enough to make things perilous for the two but there are certainly no Walking Dead style hordes. The visual effects aren’t standout but they are adequate enough for the amount of action. The film does tend to drag a bit in the middle but this is relatively a short blip and the film runs only 82 minutes.

Ben’s backstory and why he happened to be handcuffed in the ambulance is touched on but never fully fleshed out and that is a bit of a disappointment as you are left to make assumptions as to why he found himself in that situation.

Deadsight, ultimately is a middle of the pack zombie film. It features strong performances from the two leads and presents realistic fears and situations. However, it lacks the action and pace of other zombie movies.