Kyle Higgins’s new comic “Dead Hand” drops the reader right into the 1990’s Cold War era with Black Ops operative Carter Carlson. The prologue has our hero infiltrating a Russian base rumored to be holding a new deadly weapons project. Carter finds some Russian scientists at the facility but no weapons. The scientists lead Carter to what the facility is really there for. It’s a day that changes Carter’s life forever. At least that is what’s implied. 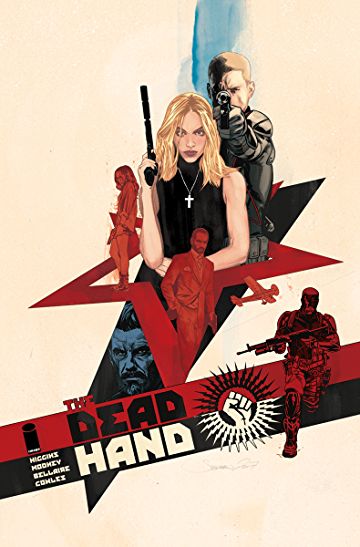 After that tantalizing prologue, we are given a glimpse into Carter’s upbringing. He is a normal kid, enjoying the outdoors and imagining himself as a Superhero.This path ultimately leads him into the military where he would become the deadly efficient special agent. We learn that later on Carter is taken under the wing of Vil, a mentor who will help him develop his deadly skills.

Higgins gives us a good look at Carter’s upbringing. His writing provides the broad strokes that is necessary with just the right amount of characterization so we can understand and relate to him.

The Story then moves into Carter’s present day life as a sheriff in a small town called “Mountainview”. Stephen Mooney’s art really shines here as we see an older Carter, who is still in good shape but with noticeable wear such as the wrinkles around his eyes and slightly slouched posture.

Carter seems to have been sheriff for a while. We see him interacting with some local teenage girls who are incredibly bored in that small town. Soon their attention is drawn to a mysterious stranger, a writer named Frederick Ellis who claims to have been lost for days and is incredibly surprised to see this town which is not on any known map or GPS.

Kyle Higgins, Stephen Mooney, and Jordie Bellaire, have crafted a very well done first issue. First issues can sometimes be a tricky thing to pull off , you want the right amount of character development so readers will want to stick around to see the protagonist’s journey yet not give away too much so that they feel like they know it all.
Kyle Higgins and his team were able to weave character with mystery and they pulled it off in spectacular fashion.