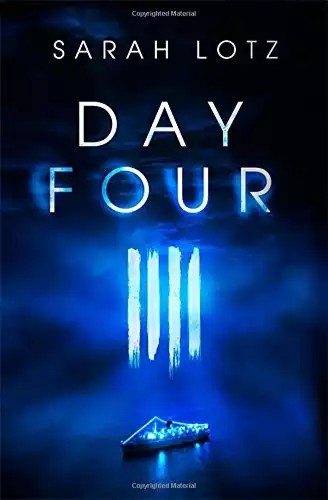 Most luxury liner boat cruises are hellish experiences – mass tourism for party animal types who want to get drunk or stoned in scenic surroundings. However, spare a thought for the passengers of fictional liner, The Beautiful Dreamer, in South African author Sarah Lotz’s latest horror novel, Day Four.  They may have signed on for five days cruising around the sunny Caribbean, but what they got instead is something out of a Stephen King novel.

On the fourth day, a fire breaks out below decks and the giant ship’s engines die. The ship is dead in the water as they say. For some unexplained reason the crew is unable to send out a distress signal and they are completely cut off from the outside world. Soon food and water supplies begin to run out and a mysterious flu-like virus breaks out. Things go Lord of the Flies shaped in no time flat: the understaffed crew loses control; irritation results in outbreaks of violence; people split off into rival factions; an on-board medium who claims to talk to the dead forms her own cult, and so on. And then rumors start that the lower decks are haunted . . .

Just about your typical luxury boat cruise then.

The real horror of Sarah Lotz’s novel doesn’t lie in the book’s supernatural elements, but rather in her spot-on description of what goes on in your typical cut-price tropical island boat cruise. (Trust me: I know someone who worked on one of those liners.) When The Beautiful Dreamer becomes the Overlook Hotel on water, it almost comes as a relief.

With several books behind her name by now, Sarah Lotz is quite the practiced hand. Day Four is slickly written and well paced. Her writing style is quite cinematic – one can easily imagine it being made into a movie one day. (Come on, Hollywood! We’re sure the results would be better than, let’s say, 2002’s Ghost Ship or the Poseidon Adventure remake of a couple of years back.)

It is being marketed as a sequel of sorts to Lotz’s previous novel, The Three. “Side-quel” would however be a more apt description. One can safely read Day Four without ever having set eyes on Lotz’s 2014 novel. It is set in the same fictional universe of The Three and some passing references are made to it, but that’s about it.

In some ways, it is a better book. Day Four is told from the viewpoint of several characters in the book. This literary device works better than the “found footage” style of The Three. The action in Day Four is more immediate and focused than in The Three.