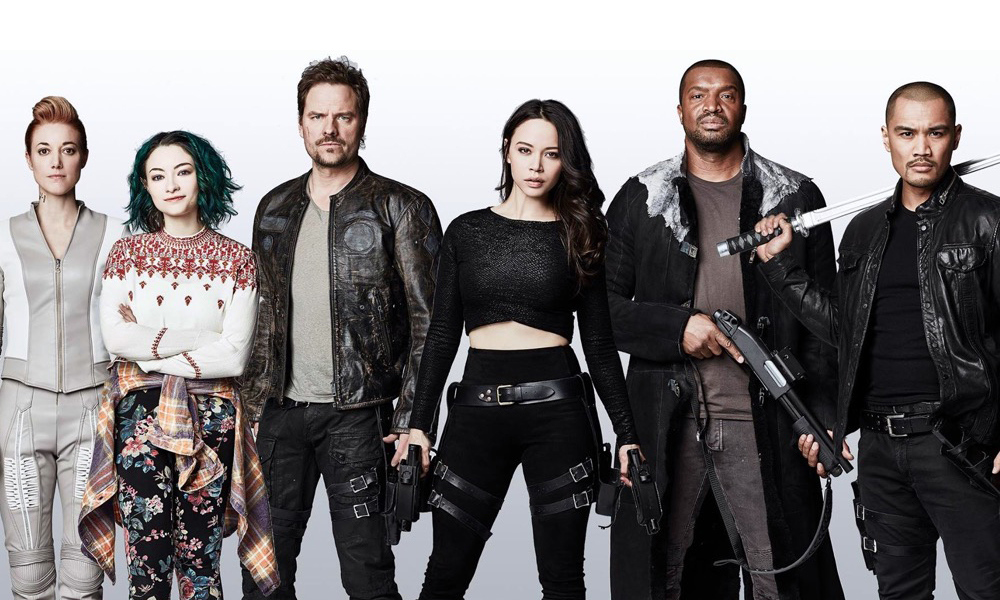 On June 12th, 2015, a little show premiered on TV, called Dark Matter. This pleasant surprise from Canada was the brainchild of Joseph Mallozzi of Stargate SG-1, Atlantis, and Universe, where he was a writer and producer. Based on Mallozzi’s comic series by the same name, the series was a terrific blend of mystery and adventure that followed the exploits of a crew of misfit antiheroes all suffering from amnesia who wake up aboard a sturdy tank-like little ship in an alien galaxy far, far away. Besides the steady diet of outer space adventure, action and drama provided, the show also had as part of its DNA the signature touch of occasional humor Stargate fans were already familiar with and enjoyed, all against the backdrop of a civilization on the brink of war. The series got canceled by Syfy on September 1st, 2017, after a three-year run.

Dark Matter had some dark moments, but in general, the series had a lighthearted tone overall; it was smart enough not to take itself too seriously and was designed to be fun. The series methodically went about the business of enjoyably acquainting us with the characters and the relationships that developed between them while simultaneously introducing the world it created.  The show’s universe is home to a corporate-ruled plutonic civilization with the same divisions of poor and wealthy that exist within our world today. Like our reality, one of the crew’s primary motivations was acquiring funds for their survival and accumulating wealth. The gang of the Raza was not above turning to crime to accomplish this goal, and the show was at its best when it depicted several excellent old-fashioned heist stories. Mallozzi and his partner in crime, the show’s co-creator writer/producer Paul Mulie introduced several engaging storylines along the way over the three seasons of the show’s all too brief existence.

The all-important appearance of the show was never an issue; Dark Matter had excellent production quality, art direction, and special effects working in its favor.

Like Its distant cousin, Firefly, which the premise of Dark Matter is somewhat reminiscent of, the crew of the Raza was a big part of the show’s appeal, and the mysteries surrounding their pasts become the main story arc of the show’s first season. This search for answers, along with the show’s weekly narratives, which often introduced future technologies unique to the series coupled with the unpleasant circumstances the crew often found themselves mired in and needed to escape, was the show’s main thrust. One of Dark Matter’s most appealing features was that most of the show’s events took place onboard the Raza or while visiting a space station in outer space. The show spent a much smaller amount of its time on the surface of planets.

The crew initially named themselves numerically based on the order they had regained consciousness and composed the series, six main protagonists. It’s interesting to note the ladies quickly emerged as large and in charge during the show’s brief existence. They were:

Two/Rebecca/Portia Lin. Two quickly establishes herself as the alpha leader and bad-ass bitch on board the Raza and turns out to be an artificially created human of superior abilities with a host of nanites that help her survive extreme conditions. She was a prototype made by Dwarf Star Technologies, but she killed the researchers testing her capabilities and escaped. The secrets surrounding her creation and past becomes one of the show’s most exciting story arcs.

Five/Das/Emily Kolburn Emily was a street kid and pickpocket who stowed away on the Raza. She has a knack for tech and tinkering with electronics. It becomes increasingly apparent she is the ship’s resident brainiac. Emily was portrayed by Jodelle Ferland, who grew up in front of TV cameras playing several roles on Stargate as a child and while growing up.

Android (Ann) is another non-human member of the crew endowed with super strength and other abilities, including being linked to the Raza and operating and sensing any problems the ship might be having with her artificial mind. Android was the show’s female version of Star Trek’s Data and a delightful character. She soon becomes a valuable part of the crew and essential to their survival, saving their lives several times during the show’s events.

The rest of the crew consisted of the guys:

One/Jace Corso/Derrick Moss was initially the show’s most mysterious figure. Originally believed to be mercenary Jace Corso, it turns out One is wealthy scion Derrick Moss, who changed his face to impersonate Corso to avenge his wife’s death. In the second-season premiere, he gets killed by the real homicidal, sociopathic Corso and later avenged by the rest of the crew.

Three/Marcus Boone/Titch. Three represents the age-old trope of a man who feels the need to act extra macho because he doesn’t want anyone to know how sensitive he is because it might make him look weak. He works at appearing tough and uses many swagger and bluster to disguise his true nature as a regular guy with a heart of gold. He’s a good guy to have on your side in a fight and loves guns.

Four/Ryo Tetsuda/Ryo Ishida is a genuine tough guy, a no-nonsense man of few words, and a top-notch martial artist. At the end of season 2, he downloads his memories and manages to take his rightful place as Emperor of Zairon, a modern version of Ming The Merciless.

Six/Griffin Jones/Lt. Kal Varrick is a sincere, loyal, caring person. In the season 1 finale, Six is revealed to be an idealistic Galactic Authority officer working undercover to capture the crew. Still, later, he helps them escape prison and reluctantly joins them.

Until the last episode of its final season, the events depicted in Dark Matter’s narrative took place in an all-human universe. Just as the show introduced some genuinely alien aliens from another dimension, it got canceled, leaving us to wonder what would have happened next. For the most part, Dark Matter was a consistently enjoyable, entertaining, and often exciting series that was never boring, almost always a lot of fun, and for a while there, was my favorite science fiction series on TV.