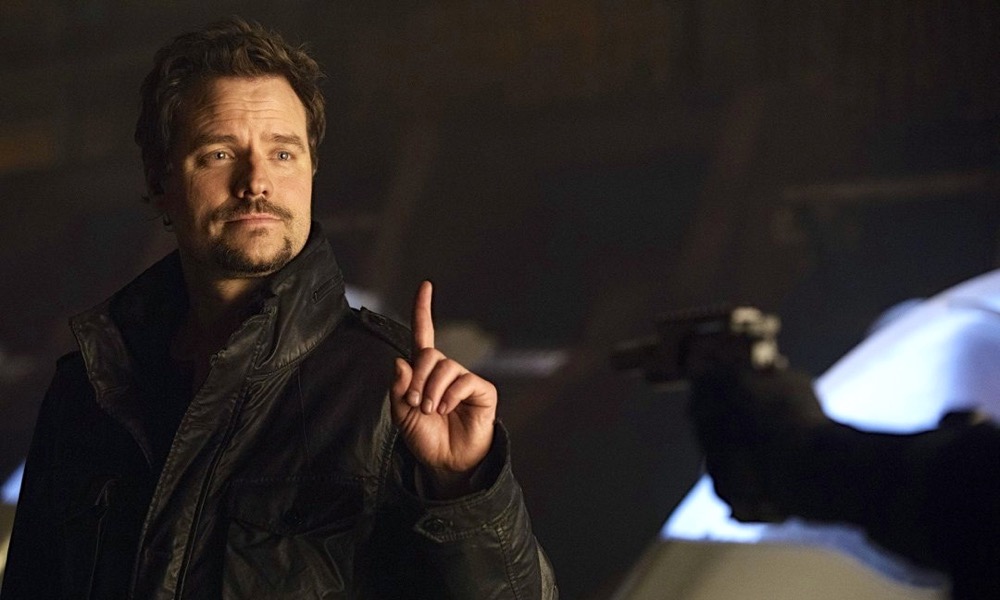 Mystery is the main course as Three, and the Raza crew find out the hard way that nightmares sometimes come true.

This week’s episode was all about the mystery awaiting the crew on a mission with action and adventure also on board for the ride. What’s going on with Three? A visit to a Dwarf Star installation has him all shook up, and what exactly is going on on the planet’s surface? There are lots of questions that need answers, and naturally getting them is not easy.

Once again the crew manages to find a war free zone, somehow, once again, it doesn’t intrude on their lives even with a working Blink Drive. This episode has a much narrower focus than what’s going on in this part of the universe, but what they discover could change everything.

While it’s puzzling why the series seems to be avoiding the main plot it created, this was an enjoyable and engaging episode that supplied plenty of mystery, some thrills, a touch of humor, and a few surprises including one huge one that raised more questions.

This week the series tells a story that takes us back to the events of season 2 when the Raza crew invaded Dwarf Star Corporation to get Two some new nanites. There was this black stuff that Dwarf Star CEO Rook exposed Three to that the crew later isolated and spaced. The nature of the mysterious substance remained a mystery. This week we find out that it was an alien entity, possibly from another dimension.

The stuff plays a major role in this week’s episode when the crew visits a planet called Nova-17 and investigate a Dwarf Star Corporation installation there, and Three has a prescient nightmare about the place before they arrive.There is a brief discussion about what they’re doing between Two and Six. Six is all gung ho about picking a side in the war and trying to make a difference. Once again Six shows his eagerness to mount a crusade against something, anything available that seems worthy. Only Android notices that Three seems frightened about the mission and going to the planet’s surface.

Speaking of Android, she introduces a new outfit to the crew and wants to know what they all think. There’s just one thing; it seems designed to draw attention to her adequate boobs as she calls them. When Two questions her about it, Android explains she wants to express her new outlook on life and how she feels about herself by changing what she wears. She is shown walking around saying boobs over and over again.

Once on the planet’s surface, Two Three and Six discover several pods occupied by nanite based simulants like Two. and soon they find there’s more lots more of them in another chamber. Five, back on the Raza is doing her thing and hacking into the facility’s mainframe to learn more. They discover the simulants are all ages that leads to the conclusion they are intended for infiltration, not for military purposes.

Coincidentally a Mikei battleship shows up right after the Raza arrives and soon they find themselves surrounded by Mikei soldiers who take charge of the situation. Their leader, a Commander Tarkanian (James Gilbert) who does everything by the book, is joined by a doctor and a Lieutenant Sajen who is a real hard ass, (a real bitch in less tactful language). We soon learn she is a simulant herself and part of the whole plan to integrate them into the general population. Tarkanian informs the Raza crew that Rook has gone missing.

Soon after the Mikei ship arrives, they discover the anomaly that was the reason the Raza went there in the first place.It resembles a vertical pool of lava. It has a significant effect on Three when he is near it. Three begins to lose his mind, at least it looks that way, he has a seizure and blacks out. The entire episode Three is spooked, first by the nightmare and now by the reality of the thing existing.

It turns out his earlier exposure wi the black substance, which we now know is an alien lifeform with plans to invade our dimension because theirs is dying, has left him with some connection to the others of its kind and the sounds of their strange voices inside his head is driving him insane.  Tarkanian will not allow Two and Six to take him back to the ship for medical attention until he understands what is going on. Sajen kills Tarkanian and blames it on Three giving the troops now under her command orders to kill him and the others.

She is seen standing in front of the anomaly, which we now know is a gateway to the aliens world, and beckoning the aliens to join her. It’s now clear she is one of them and part of their invasion plans. The aliens begin to emerge through their gateway. They resemble big splotches of ink or oil that float through the air and are capable of rapid movement when they want to. In a moment that elicits a WTf? from the doctor, Two and the doctor witness an alien take a soldier as a host by entering through his nose and mouth in a matter of seconds. It not clear how the aliens see because they have no visible eyes or any other facial features.

Two and he doctor escape as another of the creatures chases them; she convinces him they are surrounded, and the situation is bad. He responds by contacting the ship in orbit and orders a nuclear strike and shooting himself in the head. Meanwhile Three and Six escape on the Marauder. Two is desperately looking for a way out when she is suddenly stunned by a weapon from behind.

The nuke destroys the place, and the Raza crew assumes she’s dead, but Android reports the possibility of an FTL window just before the nuke exploded. Two wakes up on what she thinks is the Marauder with Three who informs her he and the Marauder are not what she thinks. It’s the doppelganger Three from an alternate reality. He saved her, but for what?

This story left me with so many questions about what is going on with the story. The introduction of an Alien species represents a major shift in the universe this show has depicted as being only populated by humans. What is Rook’s role in the alien invasion is he a willing ally to the invaders or was he just fooling around with something he didn’t understand when he infected Three? What happened to Rook and where is he now? Were all the aliens and simulants completely exterminated in the explosion on Nova-17? Will we see more of the alien invaders and will it have any effect on the war? With only two episodes left in the season, it sure seems like a lot needs explaining in a very short amount of time.