Dark Matter Review: My Final Gift To You 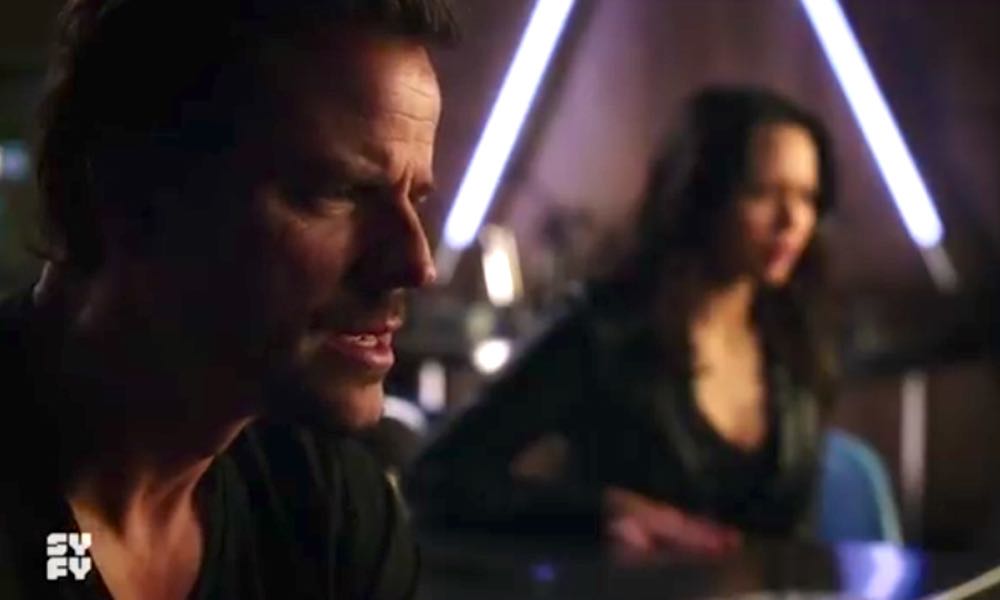 The next to the last episode of the season was an excellent edition of the show full of the things we look for in good sci-fi TV.

My Final Gift To You was a jammed pack episode of sci-fi TV, crammed with revelations, events, and twists enough to satisfy even the most jaded of fans. The addition of some deep vacuum spaceship action might have improved it some, but you can’t always have it all. Besides this was a great episode without it.

The tempo of this week’s episode moved forward with almost dazzling speed and the momentum it created made the show seem to go by faster than usual. It was an immensely enjoyable story that left me chomping at the bit for next week’s season finale with the promise of possible new directions the show could go in.

This week’s episode picked up shortly after where last week’s ended, with Two saved from certain death by a nuke and taken captive at the same time by the alternate universe Three. We find the crew of the Raza sober and saddened at the notion Two might have met her end at the hands of the Ferrous Corp battleship that bombed the platform on the surface of the planet below. Soon, however, their fears are dispelled by a communication from Ryo on Zairon who invites them for dinner and a chance to negotiate for Two’s release. He is, of course, interested in acquiring the Blink Drive for himself,

Ryo turns out to be the source of lots of interesting information about his former shipmates. He knows, for example, it was Five’s fault that Sarah died and how it happened. He reveals to Two that she has a daughter. Teku informs Five she has a sister and gives her a picture of her with the family she was living with as far as he knows. The image shocks Five, but there is no explanation why.

After some deliberation, it’s decided to take Ryo up on his offer, sort of anyway. The Raza crew travels by transport pod sending clones of themselves in place of their actual bodies. Android remains behind on the ship. Android is still wearing her new bosom accentuating outfit, and while they are gone, she tries out the new software given to her by Victor. As soon as she installs it, an avatar appears that looks just like the android Five befriended on the space station that exploded at the end of last season. The avatar starts talking to Android about overthrowing the “anthopocracy” and fighting for the rights of technological beings. I was expecting her use of the new software to play a role in the episode’s story beyond that, but it never did. Looks like the androids have an ambitious revolution in mind.

Near the beginning of this season, I wrote about how Misaki was bat-shit crazy and a ticking time bomb that would play a significant role in the future of the series and after not seeing her for a long time, she re-emerges in this episode and fulfills my prediction. I saw it coming from nearly the beginning of the show, and she didn’t disappoint.  She attempts to frame Teku, Ryo’s trusted advisor, but he is too smart for her and warns Five and the others they are in danger and should leave

Things are becoming increasingly difficult for Ryo as his involvement in war goes south. Now there is an attempt on his life as an explosion rocks the palace, followed by reports of rebellion in the capital city. There is an additional attempt on Ryo’s life when a servant attempts to poison him. Misaki is orchestrating the whole thing. She finally reveals her hand and sets up an ambush to kill Ryo in the palace. He manages to kill all of his would be assassins. and afterward, he and Misaki engage in a fight to the death. Misaki gets the upper hand in the struggle, and just as she is about to stab Ryo with a poison blade Two steps in and uses it on Misaki and avenges the murder of Nyx. She lays dying as they leave.

Thye all escape except for Five whose clone goes down in a hail of bullets. They all end up safe back on the Raza with Ryo locked up in the brig. The crew is reunited – for now. A failed coup, what becomes of Zairon now? There are still lots of unanswered questions surrounding the things that Ryo knows and what is in store for next week’s season finale, but it sure was a fun episode with tons of new developments to whet the appetite for what’s in store next for the Raza and her crew.