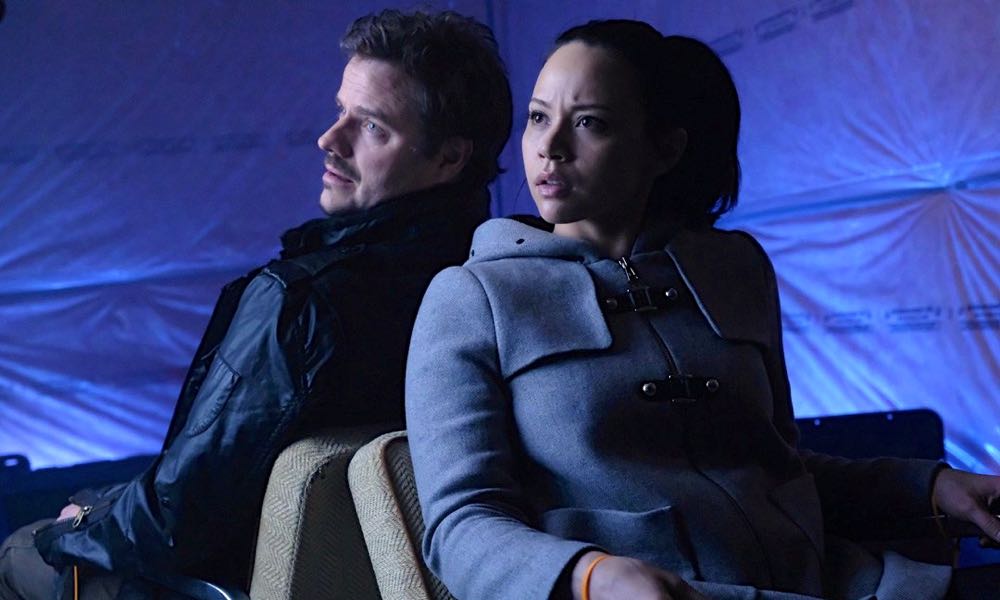 Time travel stories are sometimes not a good direction for science fiction series to go in; they can be confusing and often so tangled up in the twists and turns of traveling through time they often lose their appeal while they play out. Dark Matter took the dive into this taboo territory this week and mostly pulled it off without the usual downside rearing its unappealing face.

Not to say the episode was perfect; it attempted to be cute and amusing and largely failed in that regard, leaving us with an a-long-walk-around-the-block explanation of how the show resolves the broken Blink Drive problem and the Raza crew getting a working replacement. It was an enjoyable enough journey with some indications of a tip of the hat to Stranger Things in the form of kids on bikes playing a role in the plot.

This time around the show concerned itself with an explanation of why the broken Blink Drive suddenly emitted an EMP on its own without provocation. It turns out it was a recall function built into it by one of the corporate scientists that helped develop the device. Once they all recover, the crew discovers they have been sent back in time around 600 years, so it’s decided to go to earth as a possible refuge while they decide what to do next.

Once they are in orbit the ship’s sensors detect the presence of another Blink Drive; they choose to investigate why and how a Blink Drive could be on earth long before it should exist. Android is all about going planetside and creating new lives for themselves because they might end up having to spend the rest of their lives in the past. In fact, she seems almost eager to establish their new existence. She assumes and embraces the role as the group’s matriarchal leader in the suburban setting they settle in. None of the crew seemed to think this was odd behavior, but I sure did. Thre was no explanation of what was going on in Android’s mind.

They encounter a collection of suburban locals eager to welcome them to their adopted neighborhood, and they do their best to fit in while they investigate the location of the mysterious Blink Drive. Most of the locals are too polite to point out anything odd they might notice about the new arrivals, except for some curious kids that are a lot more observant and curious.

These kids conjure up theories about their neighbors that include being spies and finally after following Android on a visit to the Marauder, more accurately as aliens. Five connects with one of the kids by way of playing video games and makes a friend. The kids turn out to be valuable allies in their adventure on earth in the past.

The crew finally locates the reason behind the Blink Drive on earth in the past when they find a scientist who helped build them in the future and used one to escape into the past. He captures Two and Three when he discovers them in his basement. They are rescued by Five, but in the meantime, the cops get involved and have seen the Marauder in its hiding place (no explanation of why they left it out in plain sight in the woods).

Five travels a few hours into the past and fixes things so they can escape and the police problem disappears, and the scientist gives them his working Blink Drive which they use somehow to get back to their original time point. There is a brief subplot introduced about Sarah’s unhappiness about her relationship with five, and her existence as a hologram.

At the end of the episode, there is a scene involving Commander Nieman (David Richmond-Peck) contacting Ryo/Four, and he is flanked by the alternate universe Two and Three. That can spell nothing but trouble for the crew of the Raza in the season’s final four episodes.