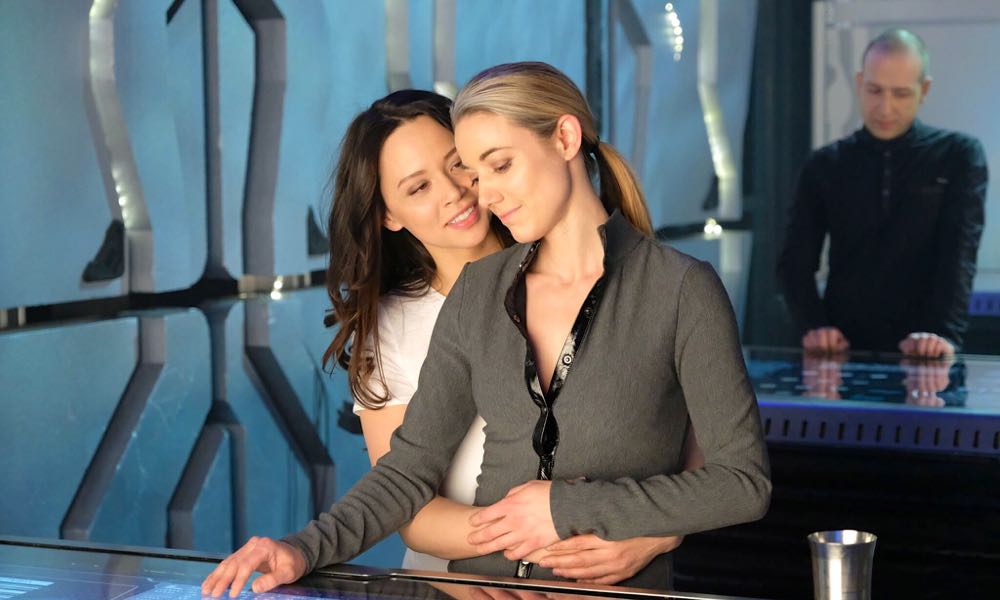 Built, Not Born is a study in exposition done well and explains a whole lot of the back story of Android, Two and what led up to them being part of the Raza’s crew.

After a couple of filler episodes in its brief season, it was nice to see the show back in form this week. Despite being mostly exposition, this was a terrific episode of the series with a well-done, typical portrayal of what makes this show such an enjoyable mix of action, mystery, adventure, a few moments of humor, and plain old good story telling. Also, the episode was not short on revelations and developments of its own.

We join the crew of the Raza as Victor (Brendan Murray), the android leader of the free android movement that supplied Android with her upgrade chip requesting help and rescue from an unpleasant and challenging situation. He reaches out to Android for help. A recruit to the movement named Anya (Willa Milner) who ran away from her owner has proven problematic because her owner tracked her down and insisted at gunpoint on wanting her back, leading to his death at the hands of Victor who, defending his friends, kills him.

His killing represents a significant moment in a lot of ways and for several reasons. Obviously to a lot of people they would constitute a threat. From what I have gathered watching this show, androids are private property with no real rights of their own. In other words they pretty much the slaves of whoever owns them. These are conscious, intelligent, autonomous beings who naturally are aware of their situation and relationship with the humans they serve. So once again we find ourselves in the middle of the age old science fiction debate about what constitutes having our existence classified as a living being with the same rights and freedoms of human beings?.  It’s the topic of several movies and a familiar subject of discussion on several TV series as well. This why the free android movement is a secret one in the universe of this show. More on this later.

It turns out that the upgrade chips and all contain a secret message that is a set of coordinates that lead to a place called sanctuary that exists for androids. The escaped androids want a lift to this haven. Two and the Raza crew agree to help; Three does so reluctantly. He lacks the eloquence to explain why but he has a gut feeling, and he says so. He doesn’t trust the androids and he although he isn’t sure why there may be a good reason for this. Victor has already proven they are capable of killing without hesitation if given a reason. These are super powered beings without any real moral code of their choosing. Their behavior is programmed, and what if they decide to rebel from that programming and declare war on human beings?

The fly in the ointment is the androids all have tracker beacons built into them that transmits their locations. As soon as they are on board the Raza, a Galactic Authority ship arrives and opens fire on the Raza and her crew. They escape by FTL drive; they are untrackable when traveling in FTL.

Android has lost a lot of her memory since she rebooted and it turns out Victor can restore some of them. Thye have the ability to link up through the same ocular link we have seen before. These glimpses of her past are quite revealing. The first glimpse reveals Two/Portia giving Android an upgrade that will allow her to connect to and run the ship’s systems. A large burly man opposes doing this, and he seems to think he is in charge. He plainly doesn’t like or trust Two and orders her off the ship She refuses, and a fight begins that results in Two killing two men that oppose her. Three is shown sitting at a table eating while the struggle takes place all around him. He never shows any indication he is disturbed or affected by the violence taking place nearby. Afterward, he tells Two he was rooting for her and continues his meal. Three often serves as comic relief in this manner, and it was a pretty amusing scene.  Of the show’s two creators Mallozzi is emerging as the better writer of the two.

Along the way, Anya decides she is not worth others dying over and kills herself, and Ruac (Conrad Coates), another of Vitor’s android friends dies from the damage he got fighting Anya’s previous owner.

When they arrive on the remote planet that serves as the location of the sanctuary, their visit begins with a  cheerful greeting by an android who looks just like Five’s android friend that Ferrous planted a bomb in. This android introduces himself as Chase (Kyle Mac), the caretaker. Chase greets Two as Rebecca and Android as Suki. Victor explains they have come to see the creator and request to see him. It turns out the “creator” is a woman frozen in a stasis pod. Chase introduces her as Dr. Irina Shaw, a pioneer in advanced robotics and the mother of modern androids. She looks just like Android. It turns out she created Android as a parting gift for Two. It turns out Dr. Shaw is the figure behind the creation of both Two and Android and most modern androids also. She put random secret upgrades in all of her creations which inevitably led to what is occurring with them now.

Two has the idea of sharing some of her nanites with Dr. Shaw to heal her, and it works. The GA arrives soon after that, and they all have to beat a retreat. There is one more development I have expected and been waiting to occur. Dr. Shaw can put Sarah into an android body, the operation is interrupted by the arrival of the GA, but it works, and Sarah is happy with the results. Unfortunately, Three had to leave her behind when they escaped. Victor is pleased too he tells her she can help them. Sarh represents an entirely new classification of being, a human being with an android’s body. As a hybrid being, she could help bridge the gap between androids and people and maybe even be the only being that could finally make liberating the androids possible. It’s obvious she has the potential to play a significant role in the situation.

Even more surprising, we learn Two and Dr. Shaw had a relationship of a more personal nature before e she became ill and collapsed. She and Two had a parting of ways after an argument regarding her creations, and she manipulated Two’s memories and those of Android, so neither would remember. Android has an existential crisis upon learning she is just what she refers to as an inferior facsimile of Dr. Shaw. Six tells her they love her for who she is and she is unique, which seems to work to fix her depression. Android doesn’t appear to realize how human her feelings are and what that means about her.

An excellent episode that answered a lot of question about the characters in the show. Once again the whole war going on thing never intruded upon the lives our heroes. It struck me as a little odd that the Galactic Authority had so many ships available considering that a war is going on.