Dark Matter Review: All The Time In The World 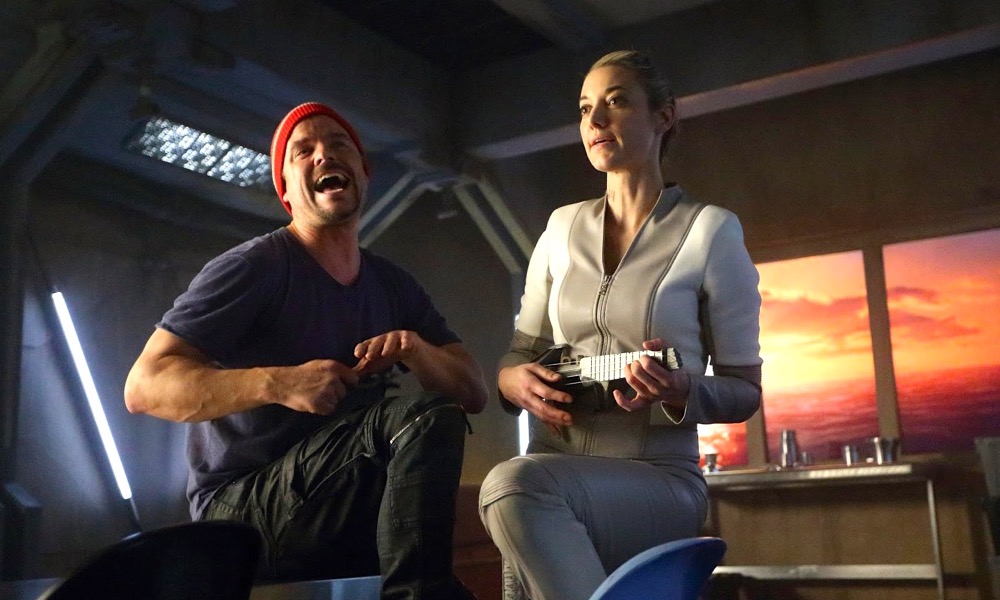 Three shines in an amusing and witty time-loop episode reminiscent of Groundhog Day.

Okay, I admit I was skeptical when I heard this week’s episode was yet another attempt by a genre series to use “The Groundhog Day” time loop trope. It sounded like an act of desperation that was showing up way too early in this show’s development. I was wrong. There was no reason to worry, the episode not only did not seem like a used up trope, but it also came off as fresh material and was witty and in places, and amusing.

“All The Time In The World” also provided an entertaining and enjoyable way for Anthony Lemke to show off the fact that he is fluent in French which gave the episode some additional material to help fuel its narrative. This week’s edition also provided the opportunity to get a little better acquainted with the two new people on board the Raza. Misha Thebauld’s Adrain Maro is another edition of Talbor Cachek, fast talking and cowardly without much in the way of useful skills. His bodyguard Solara, played by Ayisha Issa is a bit of trope as the bad ass black woman with serious fighting skills and a bad attitude. Of course, there’s no telling how long these two will be around, but like a lot of fans, I’m sure I am a little concerned about the Raza’s shrinking crew.

Here’s a recap with some comments (*warning spoilers follow*):

We start out on board the Raza, and Three (Anthony Lemke) is walking through the ship and demonstrates an ability to seem to know what’s going to happen next before it happens. He tells Android (Zoie  Palmer) what she thinks is the problem with the ship is not right and tells Two (Melissa O’Neil) where her missing holster is. He seems as if he might be drunk but he isn’t. He finally explains that he’s been stuck in a time loop and has been experiencing the same day over and over again. Of course, no one believes him and Android handles him like someone who is delusional and maybe even crazy. The polite way she responds to his questions is pretty amusing.

They go around and around like this until he decides to try some different ways to convince the rest of the crew that what he is telling them is true. He tries avoiding sleep because when he falls asleep or gets knocked out his day gets reset all over again. He tries memorizing a complex string of scientific jargon but fails to repeat it back when the time arrives. He decides to get the new guys, Adrian Maro (Misha Thebauld) and Solara (Ayisha Issa) to tell him a couple of secrets he can repeat later after he is reset again.

Finally, he decides to have the Android teach him French, and they go through lesson after lesson until he finally shows an ability to speak it well. At one point he and Android are seen singing a lively song in French while she accompanies them on some kind of futuristic ukulele or maybe a banjo. Three finally convinces the others that what he has been going through is real by uttering the scientific jargon he couldn’t remember before in French because Android used it as part of his lessons.

The ship arrives at a space station at this point, and everyone but Three disembarks for a change of scenery and to stretch their legs. Three stays behind to have a conversation with the interactive hologram of Sarah (Natalie Brown) Android discovered hidden in the computer’s files. He attempts to start a conversation with her but abruptly changes his mind because he can’t deal. On His way back to his quarters he is suddenly attacked by one of Ryo’s mercenaries Ash (Michael Reventar) who gets the drop on him and kills him, but that only resets his day again so he can warn the others about what’s coming.

Eventually, Three returns and has a good talk with his holographic girlfriend, and it seems as if he has finally come to terms with what he has been trying to deal with regarding her death

They set a trap for Ash, but it turns out he has some experimental phase technology that allows him to enter the ship by walking right through the bulkheads. Adrain manages to knock him out, and they throw him in the brig, but he manages to escape.

Ash encounters Five (Jodelle Ferland) and is slapping her around pretty good when Solara happens upon the scene of Five’s close brush with death, She gets into a fight with Ash. They both have serious fighting skills so it’s a well-done fight scene which eventually she wins. Ash goes to escape through the nearest bulkhead but Three and Two fire weapons at him as he does and he ends up fused wit the material of the ship frozen into the bulkhead where he dies.

The device Adrian uses to knock out Ash turns out to be a piece of technology he just happened to bring on board that is the cause of what Three has been going through. “The Groundhog Day” effect is caused by technology this time around, and they decide to experiment with it to see if they can learn to control it. Android decides to set it to send her back five seconds, but something goes wrong.

Android experiences an extended trip through a temporal anomaly that causes her to go through several phases of odd situations while traveling through time and different locations. She is seen sitting at a table crying for reasons unknown, and then she finds herself captured and partially disassembled by a scientist who says he works for the Galactic Authority. Finally, she becomes a  Goth-Borg-like version of herself in a universe where the stars are few and far between as Five puts it. Here she encounters a much older version of Five who tells her she must destroy the device to return to where she started.

Suddenly she is back to the point where she is about to attempt her experiment, but instead, she rips the wiring out of the device. The device’s destruction seems to solve Three’s problem. The episode left a lot of questions hanging regarding Android’s “future glimpses,” as the elder Five calls them. Will we see Three shoot Android at some point? Will she feel grief and cry? And will the futures where she’s dismembered or speaking with Five about a “double deception” or “black ships” come to pass, or has she prevented those futures by destroying the device? I think it’s likely that what she saw was only one version of many possible outcomes the future holds.

Episode 4 was a great chapter in the story of the Raza and her crew. It seems the series is back on track after last weeks show that left me wondering if it had gone slightly off the rails. Still wondering what will happen with Blink Drive and Ryo’s mercenaries remain a big problem. I am eager to see what happens next. [review]