Dark Matter: A Review. Season 2, Episode 5 – We Voted Not to Space You 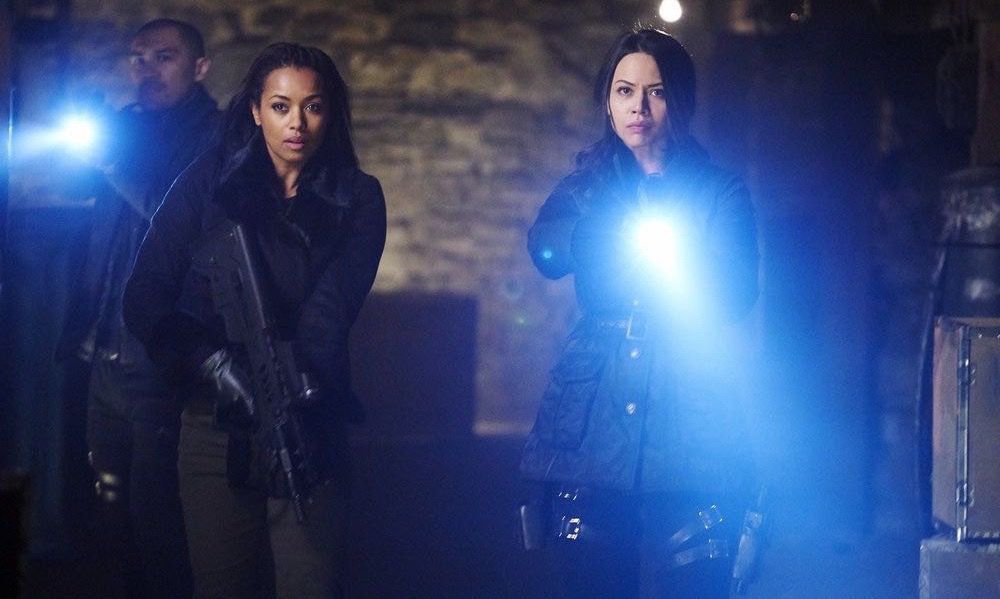 The Raza crew, with cops, criminals and the corporations after them are back to acting a like a team, an effective team that gets results

We Voted Not to Space You was a no-nonsnse, action packed episode that got right down tot the business of telling its story, that teases what the series has in store for the future, while wrapping some old business.

The title refers to the decision by the group, to not kill but take a more compassionate attitude towards #6 for his betrayal of the Raza’s crew, but #4 still doesn’t trust him, and wants nothing to do with him.

The future is intimated by mention of the coming war, the emergence of Ann (what I have decided to call the Android) with her upgrade in place, becoming an effective secret weapon, and a more integrated part of the crew.

The episode begins with Ann entering a dive bar on a space station where she approaches a person of interest in the murder of #1. She approaches him and his friends, and when they refuse to answer her questions and decide to rob her instead, she kicks some serious ass and takes her objective in tow anyway, without breaking a sweat.

The episode flashes back 24 hours to the point where the story begins, where Ann brings her available upgrade to the crew’s attention, and suggests using it to provide an identity that won’t raise alarms. She has been  considering using it since the end of last week’s show, and now she has an excuse and a reason to do so to allow her to go undercover, because the rest of the crew is wanted by the authorities, and she won’t be recognized.

The crew has been deliberating about what to do next, and #’s 2, 3, 4, and 5 all decide their decision regarding #6, and that they need to take action against the man that killed #1, because he was part of their crew. Its a moment that defines the show going forward, as they make a decision to take action as a unified team.

While its obvious #2 is the leader, #5 is emerging as having the most perceptive and incisive intellect of the group, combined with a no-nonsense attitude, that doesn’t shy away from the tough choices a leader sometimes is forced to make.

Ann, in her new upgraded persona, goes under the name of Kiva Ehrens, and the changes in her appearance, and behavior is remarkable. She looks good, even kind of hot, and when #4 is still not convinced her makeover is good thing, she pats him on the ass as she leaves, because he hesitates to compliment her transformation.

It turns out the opening scene was actually the second of her missions in her new identity. First she had to get herself arrested by station security, in order to get close enough to one their computer terminals to hack it, and in an amusing scene, she first tries by opening the entrance to a restricted  area, and when that doesn’t work, she  assaults the security guard that shows up by grabbing his hat, throwing it away, and then ripping his shirt down the front, which does the trick.

She succeeds in planting a device that allows the crew to get all the information it needs  so they can find Jace Corso (Marc Bendavid back as a guest star), the man who killed #1. The plan works and soon the Raza crew is on their way to the planet where he is hiding out, to take revenge for the murder of their former friend.

While this is all going on #3 is depicted watching the news and there’s mention of a local conflict somewhere that could represent the beginning of the coming war that we were warned about as the last episode ended.

Meanwhile, Ann/Kiva’s hack has been discovered by the Galactic Authority, and two of their officers (Kris Holden-Ried, Andrew Zachar) show up at the security station where the hack took place, reminding us the GA has not forgotten the escaped prisoners, and is hot on their heels.

The crew reaches their destination and #’s 2, 3, 4, and Nyx disembark to carry out their vengeful  mission. They enter the compound where Corso is hiding out, and he’s got a bead on them when Nyx suddenly shoves #2 out of the line of fire and saves her life.

Nyx continues to prove her value as a new crew member. Its not clear whether she has some sort of enhanced abilities, intuition, or what, but this is not the first time she has prevented disaster with an uncanny sense of what’s about to happen.Its possible she’s another edition of what makes #2  special. Whatever it is, I get the sense there’s something about her character yet to be revealed in future episodes.

It was not made clear what became of Arax in last weeks episode, but he is no where to be seen, I assume he never bothered returning to the Raza, after being exposed as not being trustworthy. Devon is shown once again turning to drugs when he has the opportunity, with  flashbacks regarding his past as a doctor in training, which it increasingly seems ended because of this same drug problem.

Anyway, the Raza crew arrives  at Jace’s hide-out, and a shootout with him commences, he gets wounded but still escapes, Ann/Kiva is forced to make an emergency landing in an effort to avoid the GA ship that arrives shortly after they do. This is a nicely done sequence of the Raza landing.

Jace has set explosives to go off to help cover his escape, that ends up trapping #3, #2 and himself in some underground passages that collapse as a result of the explosions

#3 has his legs trapped by rubble and he’s captured by the dogged  Chief Inspector Kieran (Kris Holden-Ried), of the Galactic Authority,  who arrives shortly after. The rest of his men were killed by the collapsing structure. He has called for backup, and is on his way, with fresh troops, to return to his ship and arrest #3.

#2 and Corso are trapped together, and she makes him dig a way out, until she finally kills him after they go back and forth for awhile about  his killing #1.

Also #5, #6,  and devon have left the Raza to help their friends who they think may have run into trouble, and they arrive at the location of the GA shuttle, and commandeer it.

Everyone arrives at the same place at the same time, the Raza’s crew rescues #3 from custody, and Lt Anders is left empty handed as they escape.

The episode ends with Ann having a conversation with her holographic counterpart, who is admonishing her for making a mistake and being flawed.  I suppose we can expect more of these sorts of schizophrenic scenes depicted in the future of this show.

Another very enjoyable episode that seemed to go by so fast it surprised me. The episode gets extra points for its portrayal of Ann in her new upgraded persona of Kiva, and the amusing way she  is shown dealing with all she encounters.

It also gets points for an enjoyable, action packed story, that showed the promise of the show’s future depicting the  Raza’s crew as a kick-ass group of characters, who its just plain fun to watch interact with each other. The chemistry is good between these actors, and that’s, of course, important in  a character driven show like this. Can’t wait to see next week’s episode.

One thought on “Dark Matter: A Review. Season 2, Episode 5 – We Voted Not to Space You”