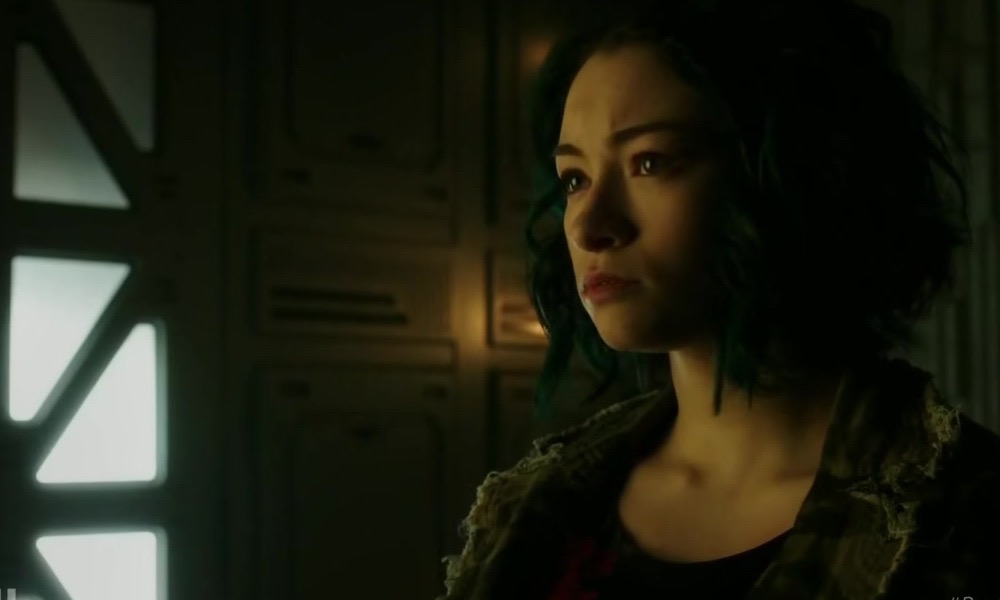 Things get complicated while the Raza’s crew is still in prison, in an episode withe some big reveals and a few big surprises.

Kill Them All was the kind of episode we’ve come to expect from this great series; action packed, full of mysteries, twists, and turns, and suspense.

The evolution of the relationships between the members of the Raza’s crew has gone into overdrive. any doubts and distrust of each other that was apparent in last season’s stories has gone by the wayside, and all  but disappeared, replaced by what seems to be a new sense of trusting in each other, and working together for the good of the team.

Yes, I said team, because that’s what they seem like now, and when they work together, they are pretty formidable, and its cool to see. Implicit is a future where they will operate like the proverbial well lubricated machine.

Episode 2 begins in the living quarters of an apparently wealthy woman, named Alicia Reynaud (Inga Cadranel) who is speaking to a large computer display on the wall of her home, when she is interrupted by an employee with news about the capture of the Raza. She seems disinterred until its revealed that Five was part of the ship’s crew.

She refers to Five as pumpkin, and speaks with a  familiarity as if she knows her well. She has a strong wicked step-mother vibe, and her arrival seems to spell unpleasant things for Five’s future. She’s interesting because she’s a reminder that of all the Raza’s crew, Five is the one we know the least about, and I am very interested in knowing more. What’s her relationship with this woman? Reynaud’s emergence seems to promise more information will be forthcoming about Five soon.

This episode finds the members of the Raza’s crew still in prison, and the usual prison cliches still apply. They are attempting to formulate a plan of escape from this supposedly inescapable prison located on a moon with no atmosphere, making the task all that more difficult. They have very little information about the place to base a plan on.

The episode portrays the environment the events are taking place in as a minefield of trouble for whoever picks the wrong side between the Galactic Authority, and the corporations who are in charge of the system , and whatever happens in it. The prison’s warden (Carlo Rota) is depicted as a corrupt and  weak man, who simply wants to survive this unpleasant situation he find himself in, and his staff is just as corrupt and open to being bribed as he is.

The warden orders his chief flunky to have Two, Three, and Four killed, because he doesn’t want them to become more of a problem than they already are. Shortly after that, they are assigned to a new work duty – waste removal, and their supervisor  traps them in an incinerator room  where things soon begin to get hot.

Arax Nero (Mike Dopud), intervenes and rescues them from certain death, and he makes it known they are under his protection. For whatever the reason, the gang leader has taken an interest in them, for better, or for worse.

A series of interviews with the characters involved in the capture of the Raza, including the crew itself, takes place. These interviews are being conducted by Chief Inspector Shaddick (Franka Potente), who is using the time honored approach of trying to get the crew to turn on each other to get what she wants, Information, and enough evidence to execute them all. There is some specific information everyone is interested in getting, what that is, is not made clear, but it sure seems important.

When 6 is interviewed it is revealed he and the other crew members were subjected to a program written by Five, that caused their amnesia,  as a favor to him when his cover was blown and it was discovered by the crew he was working for the GA. This implies he and Five were on friendly terms before their memory loss as well as after it.

Eventually its Four’s turn to be interviewed, and surprisingly, instead of  Shaddick its  Commander Truffault (Torri Higginson of Stargate Atlantis), of the Mikkei Combine, who we met briefly in season one. Its a short conversation, in which she tries to convince Four to sell out his friends in return for walking away free.

Its an offer he rejects without hesitation, in no uncertain terms, but she insists he look her in the eye when he says it, and when he does she transmits some information into his brain by way of an ocular device, that turns out to be the plans of the prison’s  structure. So now they know the place’s layout, and have a much better chance of escape.

On another front, the android is still being examined for some vital information it has in its memory banks, that the GA seems almost desperate to get its hands on, and some hardware is shown being attached to the back of its head in order to get it the hard way. Its clear this hardware is causing it (her) some degree of discomfort, which she endures without expressing it.

Meanwhile Nyx approaches the remainder of the crew, back in general population, about their plan to escape, which they all deny they are up to. Eventually Nero, gets involved in the conversation, and also wants to know what the crew is up to, and wants in on the scheme. Together they come up with a plan.

All hell breaks lose when the Raza crew members and Nero’s gang start a prison riot to cover their escape. The warden orders his sonic weapon used on everyone in the prion,  and it works, but Two’s special abilities allow her to recover faster, she gains access to the control room, and disables the guards with their own device.

Before the riot Three refuses to go along with the plan entirely because of his pride, so Nero knocks him out, and he’s taken to the infirmary. While he’s there a mysterious woman arrives and she’s there for him. She has bad intentions, and the two end up in a huge sword fight and he defeats her. When she wakes up from being knocked out, she comes back for more, which ends up in a tie until Five arrives with a gun and knocks the badass woman out of the equation, because they’re in a hurry she says.

Speaking of badass, Five has her moment in the show when Shaddick makes the mistake of putting Five in the same room with the android. When the power goes out, because of the riot, the android is freed, and Five gives it (her) an order. “Kill them all” is what she says, and the android complies without hesitation or mercy. she kills everyone in the room including Shaddick, who only lasted for two episodes. This is a real revelation regarding Five, who knew Five was a such a badass?

Wow, we haven’t seen the android in this mode since the pilot episode last season, and it was a shocker; as well as Five’s deadly serious decision to order the deaths of Shaddick and the others in the room. This is a side of Five we haven’t seen before. Ever. This marks a whole new aspect to the show with a major departure from its normal tone to the dark side.

The riot starts again, and Nero along with the Raza’s crew, Nyx and Devon Taltherd (Shaun Sipos), the almost-doctor-guy, are close to escaping when they run into Six who is willing to allow them to escape, but his fellow officer is not, and they shoot each other which allows the escape to succeed. Six is badly wounded in the exchange, and close to death.

After the dust settles they steal a shuttle, somehow get the Raza back, FTL away, and Six is put in the deep freeze until he can obtain more sophisticated medical help. It looks like the almost-a-doctor guy, Devon, is the newest member of the crew, for now. Its not clear whether they are killing Six off, but it looks like we won’t be seeing him for awhile, except maybe in flashbacks.

This was a great episode, action packed, and eventful, that showcased the strengths of the  series very well and left me wanting more and wishing next Friday was not so far away.

It had some big surprises, especially in the depiction of  Five going to the dark side which is something new for this series. It implies we can expect anything from this show in the future, to expect the unexpected, and that even though it has a lighthearted side at times, it also has a violent and dark one.

I find myself wondering what effect having Nero, Nyx and Devon on the Raza will have on the future of the series, (and how long they will last, after all, they have all but killed off Six, which was not entirely unexpected, but still…) Still  no word on what will happen with One, except the Raza One is definitely dead. Along with learning more about Five and that woman that showed interest in her, there’s still a long way to go with this one, and I hope its allowed to last long enough to fully develop whatever plan is place to tell its story.