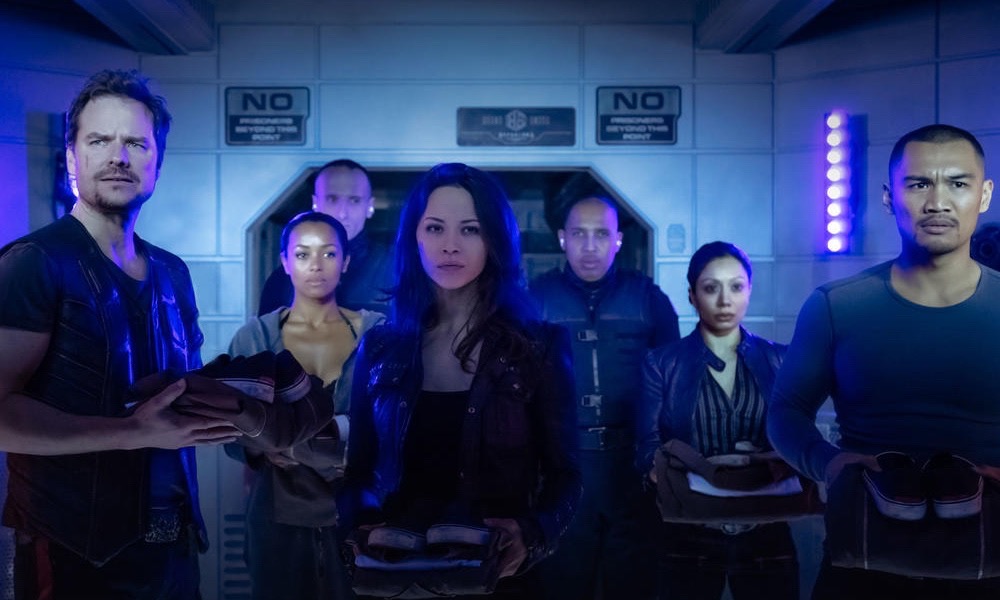 Prison in outer space, with some futuristic touches, is depicted much like it must be today, a spartan, corporate designed, clean, sterile, and intentionally bland environment, that can still prove dangerous, and even fatal.

The premiere of season two of Dark Matter starts out shortly after the the events that marked the end of season 1, the crew is shown shortly after it arrives in a high security prison, with 2, 3, 4, being prepped for their initiation into general population, while 2, and 5 are shown to be in a small private apartment-like situation. 6 is revealed to be the one that betrayed them, but he was not aware of his true identity as a security employee of the Galactic Authority ( aka the GA). he’s the mole that betrayed them, but he’s not a villain, or evil.

In fact this whole episode sees to be a reminder that nothing is as it  first appears, and  thinking you have a handle on what is going on at any given point, almost always proves to be untrue. The mysteries of season one on this series only seem to deepen. the more you think you know, the more you realize there’s something else going on behind it.

The paranoia, and suspicion that was pulling the crew apart in last season’s finale is shown to be fading, as they are shown growing more dependent and trusting of each other again under their new circumstances. Being put in prison is proving to be a different experience for everyone:

1 is not put into prison, but more or less, treated as a guest  of the GA. His real identity has been established as a wealthy businessman, who altered his identity in search of the truth about the murder of his wife before joining the crew of the Raza.

After initially sharing a space with 5, he is shown being transferred to a nice apartment of his own, where he meets with his attorney who warns him to distance himself from the rest of the crew. he is also joined by the CEO of his company, an old friend of his father’s who may or may not be a murderous villain who was involved in the death of  his wife, and wants to keep his hold on the company that 1 now owns.

2, 3, and 4, in general population, are all shown involved in violent encounters with the other prisoners in typical cliched prison story situations.  This allows them to test the waters of their new environment. The situations they have experienced, are more than the cliches they first appeared to be.

2, for example meets and  makes friends with the alpha dog of the place, a woman, named Nyx Harper (Melanie Liburd). After they fight to more or less a tie, both are put in solitary confinement, but can chat and get acquainted in V-yard, a virtual reality that allows them to ‘leave’ their cells for a short period each day, another aspect of future prisons in outer space.

Likewise 3 meets another alpha dog, a man this time, named Arax Nero (Mike Dopud), the leader of one the prison’s gangs, who warns 3 not to rock the boat, and follow the rules.

4 is sent to the infirmary, after getting his ass kicked by Nyx, where he meets Devon Taltherd (Shaun Sipos), a trustee with medical training who gets to do his work duty in the prison’s clinic. I suspect the Raza will have a resident doctor soon as a part of its crew.

Their experiences are revealed to be strategic in nature, and when the dust settles, they share what they have they learned, as the beginning of forming a plan of escape from this place that has never been escaped from before. Somehow, I suspect its something they will accomplish soon, because they’re the crew of the Raza, and i don’t see them spending a lot of season 2 with them in prison. Being a 13 episode a season series, has its perks, there’s not a lot of time to waste in telling your story. The jailbreak is something I look forward to seeing depicted in the coming episodes soon.

Meanwhile the android, along with the Raza, has been impounded,, and ‘she’ is shown being examined by a technician who wants her to allow him to download her data banks. She refuses to cooperate, it seems she has embraced her malfunctioning personality matrix, and is not willing to to let herself be analyzed beyond a certain point. She is less robotic that before, and expressing more individuality, and will.

Ironically, its 6 who seems most disturbed, and tormented by the way things are now, he had no memory of who he was, or that he worked for GA, until after the crew was captured. He tries to look up his records, but finds parts are classified and beyond his access.

He turns to 5 for help, hoping she can open the files so he can learn more. She is still angry at him for betraying the crew, but decides to help him anyway, if she can. She is still fond of 6, despite herself, and believes his story and obvious dismay over the way things turned out, and his betrayal of the Raza’s crew.

5 , as a minor, is scheduled to be transferred to a group home on a nearby planet, but just as  she is being led away from her rooms to go, she is intercepted by a woman who identifies herself as Chief Inspector Shaddock (Franka Potente) who informs 5 and her escort, she will not be going anywhere until she is done with her. It is not revealed what is going on here, or why, but it does not bode well for 5, and seems as if this detour from her planned transfer will not be pleasant. Another mystery in a pile of mysteries this episode creates.

The episode ends with a surprising, shocking, and violent twist. When 1 answers the door of his apartment, he comes face-to face- with his double who promptly shoots him several times, and then once more in the head, assassin style, to make sure he’s dead. This raises several questions, which #1 did the shooting and which one is dead? is this the end of the Raza #1 or his doppelgänger? Another more far fetched explanation could be he was replaced by one of the furistic virtual doubles we saw killed in season 1, but this seems unlikely.

It was nice to see the Raza’s crew again. It was like seeing friends, you haven’t seen in far too long, and even though the episode didn’t get to the meat of the story going forward, I feel that the coming episodes will make up for that soon.

The season premiere moved the story forward by raising more questions than it answered, about all the convoluted plot threads regarding the Raza’s crew, and what season two has in store for them.

Dark Matter has managed to get me well engaged in the story of the Raza, and her crew, using a well established blend of mystery, adventure, and action. The one element missing from this episode, and one i enjoyed from  last season, was the  touches of humor it had, I am hoping that enjoyable aspect of the show has not been entirely abandoned.

The mystery, especially that shocking ending, definitely left me hungry for more, from this series, and eagerly looking forward to what happens next on this show’s second season.