Described by co-writer Matt Hawkins as “a combination of a continuation and an origin story”, this re-imagining of 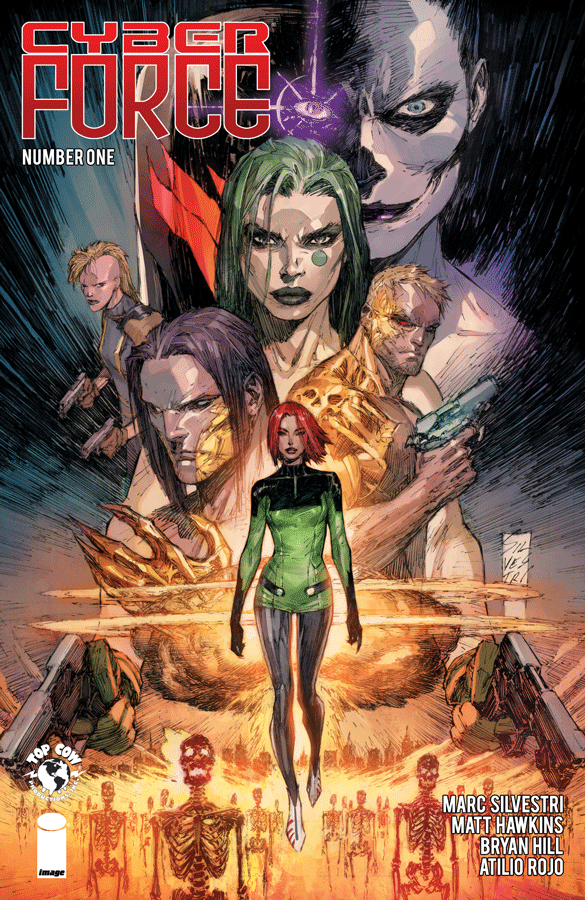 Marc Silvestri’s Nineties “Top Cow Productions” comic book series treads some decidedly familiar ground for those readers acquainted with the 1987 American science fiction film “RoboCop”, or its more recent remake by producer José Padilha in 2014. For whilst Issue One of “Cyber Force” undoubted has been designed to allow first-time readers to the series “to fully get everything” without them having “read anything prior to this”, in doing so it contains some astonishing similarities to the aforementioned motion pictures due to its narrative focusing upon a security guard who when ‘fatally wounded’ by a criminal is subsequently transformed by a “megacorporation” into “a superhuman cyborg law enforcer”.

Fortunately for this twenty-page periodical’s audience though, that doesn’t necessarily mean that this book’s creative team hasn’t got some enthralling surprises still up their sleeves for them, with Morgan’s mask-wearing armoured assailant proving to be a particularly enigmatic nemesis when it is later revealed that the cold-blooded terrorist not only seemingly knew who he was, but also failed to finish him off despite killing everyone else at the Cupertino facility. Indeed, the so-called “firewall against your march towards destruction” looks set to be a particularly intriguing antagonist with their misplaced self-righteous belief that they are all of humanity’s saviour and clearly need to gun down dozens of hapless, innocent civilians in order to prove that point; “You have made gods of machines. But these gods shall not be merciful. These gods will be cruel. I have seen their judgement fall upon you.” 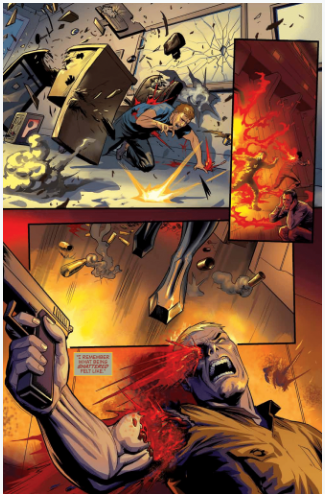 Equally as engaging is this publication’s other leading character, the eighteen-year old Carin, who desperate to see her father’s life saved, naively provides the legal authority necessary in order for him to be transformed into “the pinnacle of human achievement.” This well-written, emotionally-charged scene is made all the more poignant when the ‘camera’ pans out and reveals that the tearful teenager is actually chairbound herself, and whilst clearly not in the least bit interested in the “fiscal compensation associated” with her consent, is undoubtedly attracted to the prospect of being able to walk unaided herself.

Perhaps slightly less successful than this comic’s stimulating script, is some of the artwork drawn by Atilio Rojo. There can be little argument that the Spanish illustrator predominantly does a competent job throughout this tome, with his pencilling of the heavily-armed extremist proving one of the book’s highlights. Yet every now and then freelancer’s figures appear a little two-dimensionally wooden, such as when Morgan faces his daughter for the first time since his operation, and realises that his benefactor’s “now… own us both.”