I admire a lack of pretentiousness. 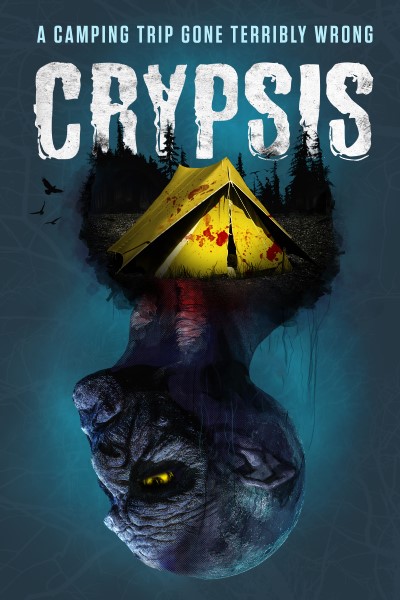 It’s not exactly a guarantee of quality, but it indicates the goal is to entertain first and to feed the ego second. What you see is what you get, and Crypsis is the definition of barebones. A group of clueless young adults travel to a deserted island on a dare. There’s a monster on the island (no ambiguity) and when they start to disappear the night becomes less about silly challenges of manhood and more about survival. Someone loves the classics in the genre clearly. The thrumming music, the POV of the seldom seen monster vision stalking the characters, the flat out goofy dialogue, the unapologetic crunchy guitar music making sequences more action heavy than gory and grim: it harkens back to a more naive creature feature mentality of the 1950s, even if the storyline is firmly planted in the current time. Despite the R rated language, the attitudes and interactions of the characters are so naturalistic you get the impression of not only longtime pals in the context of the film but also that the actors got along as well. Yes they bicker, but they do so with the kind of fervency you only get when you care.

It’s nice to see people in a horror film you don’t hate. They’re none too bright and abrasive at times, but not actively distasteful like a lot of characters that populate slasher films especially. These are not prime time actors, but they’re amateurishness helps to make them feel more like regular folks encountering the extraordinary for the most part.

Crysis, beyond the wonky title, has a bit of a personal identity beyond the cliches it embraces. There’s a LOT of pretty and dynamic shots of blazingly bright torches illuminating trees in extreme contrasts of surprisingly colorful flame and very very dark forest backdrops. There’s some nice minimalist choices here. Sometimes all we can see is the outlines of characters and their fogging breaths.

No day for night here! We’ve got some obvious stage lights, but at least there’s a nice blue coloration to the incidental lighting that could pass for a really bright moon. Effects are pretty decent for the budget especially, and the filmmakers realize their limitations. The monster is suggested more than displayed which is clever way of downplaying the floppy rubber hands and stringy hair involved. The actual face is quite good though.

It tends to drag, comes apart at the end, and the interludes of found footage style is a little confusing when the entire movie is fully scored and there’s a voice over AND flashbacks, but for what it is it’s certainly a cut above a lot of bargain bin productions. And you certainly can just settle back and enjoy. We’re not talking deep metaphors or complex twists, we’re talking unassuming, well made but no-frills monster movie.
And that I find myself appreciating more and more.