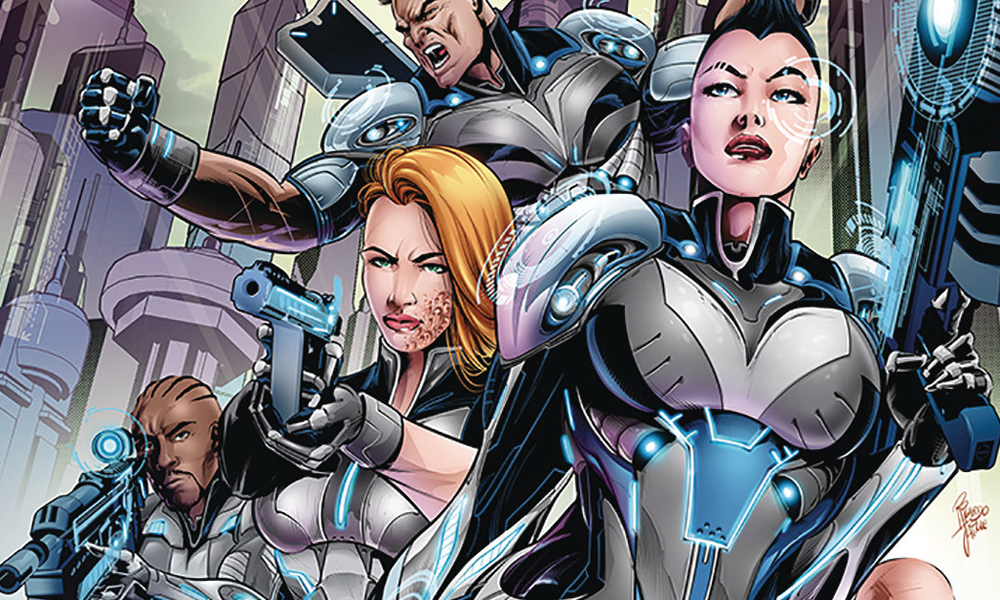 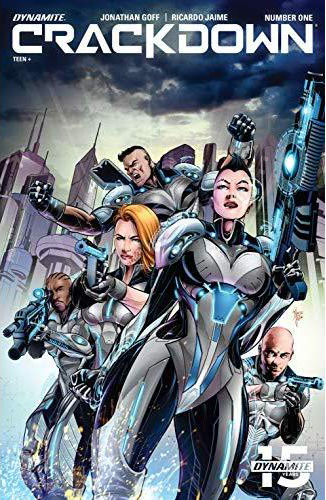 games console, this opening instalment to “Dynamic Comics” mini-series set within “the hyper-powered world” will surely please fans of the open world action-adventure video franchise with its incredibly dynamic opening and unabating assault upon the senses. Yet for those readers unfamiliar with the “not-so-distant future” where “civilized society is more plugged-in and interconnected than ever” Jonathan Goff’s narrative is probably a rather overwhelming submersion into the lives of “an elite international crime-fighting task force”, due to the “Halo” writer’s suffocating use of numerous text boxes filling in all manner of knowledge gaps for the uninitiated; “But no-where’s a paradise. And San Reno, like everywhere with promise, attracts its fair share of snakes. And by snakes I mean gangs. And in San Reno’s case, gangs means a dozen or so small armies…”

Fortunately however, for those readers able to wade through this word-heavy webbing, Sub-Commander Rollins’ unsuccessful attempt to capture Kuma Delonte before a ‘devastating blackout plunges the major metropolitan area into darkness and chaos’ arguably progresses at an enjoyable gun-toting gallop, with its storyline surprisingly managing to provide each of the heavily-armed Agents with their own moment in the spotlight. Of course, there is very little opportunity in between all the slayings, explosions and censored expletives for this fast-paced twenty-two page periodical to provide anything resembling character development. But at least it is possible to recognise the specialist roles each member of the leading cast delivers, whether it be the brute force of Marco Hernandez or sniping skills of Tayo Okafor, even when artist Ricardo Jaime’s slightly scratchy-styled pencils debatably don’t help make everything within his panels as clear as perhaps a perusing bibliophile might want.

Additionally, the sudden removal of both the augmented cops’ authoritarian leadership, along with their advanced technology, actually helps make Goff’s media tie-in far more enticing than its initial premise of the protagonists simply stepping in to assist “traditional law enforcement” before it is overwhelmed by an unprecedented collaborative campaign between the conurbation’s main criminal fraternities. Indeed, despite this book’s aforementioned faults, its cliff-hanger, which concludes with Rebecca standing upon a deserted roof-top with just three of her astonished team-mates staring out across an all-too dark cityscape, must genuinely have made many followers determined to pick-up this title’s next issue just as soon as it appears on their local store’s spinner rack.