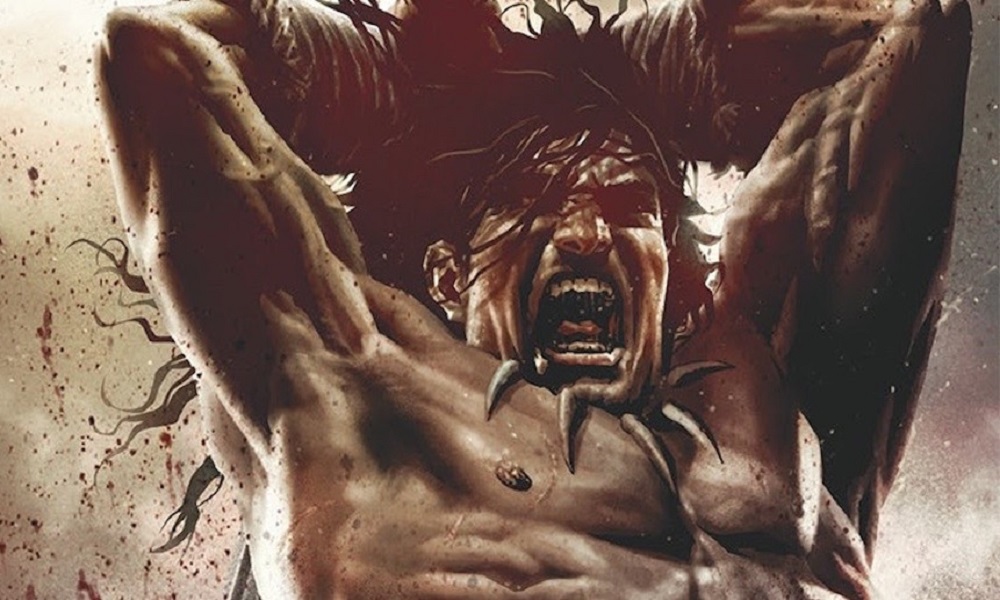 The series is written by Cullen Bunn with art by Lee Bermejo. The series is touted by Dark Horse as a “perfect jumping-on point for new readers” which is somewhat pointless claim since it is a new series so a #1 issues should always be a good jumping-on point. That said while the debut doesn’t throw readers into the middle of a storyline, neither does it give much background on Conan for readers who might be unfamiliar with the character. Besides mentioning that he is a barbarian from Cimmeria there isn’t anymore revealed about Conan’s past.

As the issue opens, Conan is seriously wounded an on the run from Turanian soldiers. Conan had been leading a band of Zuagir raiders against various outposts in Turan when they became too greedy and fell into a trap. Conan’s entire force is wiped out save for him, leaving him bloody and weary, fleeing into the desert. He collapses in a heap at the camp of a group of Kozaki bandits, not knowing if they are friend or foe.

If we use the outstanding timeline of Conan’s life from the Barbarian Keep website we can place Conan’s age at somewhere in his early to mid-20’s. He’s grown into a man, certainly, but has not yet acquired the wisdom yet which would allow him to live to a ripe age. This is exemplified in his becoming too bold, resulting in his men being killed.

Howard described Conan as having “gigantic melancholies and gigantic mirth.” He certainly is filled with gigantic melancholies in this opening issue. The guilt of leading his men to their deaths weighs heavily on the young barbarian. Despite Howard’s description he rarely portrayed Conan with the kind of self-doubt and almost self-loathing that Bunn does here. This isn’t necessarily a bad thing, but if you grew up reading Howard’s stories or Marvel’s version written by Roy Thomas, it is a more critical look at the character. Bunn has a good feel for the character and the dialog is not filled with modern jargon that would be out of place the way I have seen with other Conan writers. 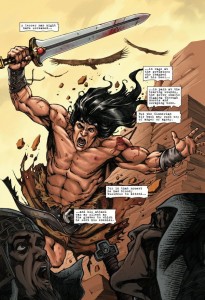 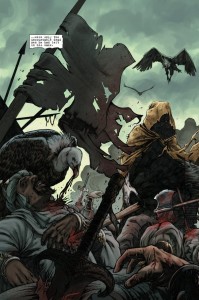 Lee Bermejo is an artist who has been around for about 15 years, primarily with DC and Marvel, but never having what one could call a signature run on any title. His most notable work was the 2008 Joker graphic novel. His rendition of Conan was exceptional. He draws him as slightly thinner than John Buscema whom I consider the preeminent Conan comic artist, but appropriate for Conan who in his early 20s is still developing physically and not yet reached his peak in power.  There isn’t a great deal of action in the first issue but Bermejo takes advantage of the opportunity with well-designed and bloody fight sequences.

Dark Horse has done a fine job with Conan since acquiring the comic rights several years ago as they always seem to do with licensed properties. I hope that Bunn continues to provide more details on Conan’s history as the series goes on and you can never go wrong with including a map of the Hyborian world which would be a great help to new readers so they know where places like Turan are actually located. So yes! Conan the Slayer is a great jumping-on point for Conan fans new and old!