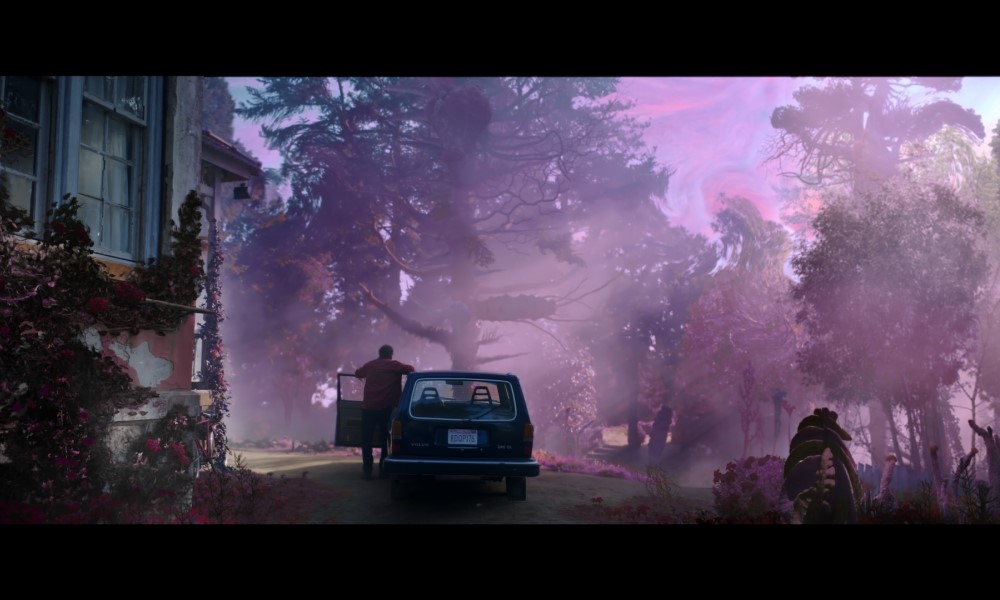 I am a massive Lovecraft Fan. His prose is purple, the mainstream has nearly ruined his most popular work, but he 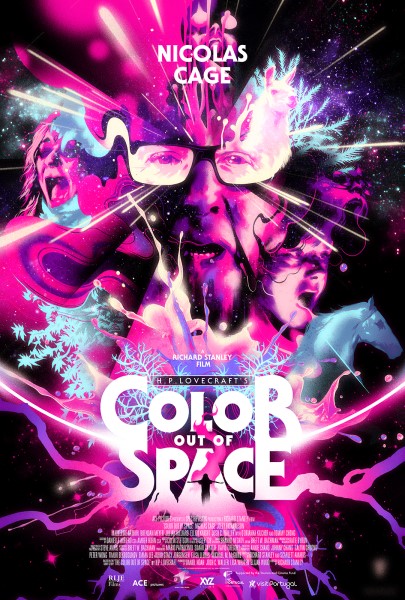 remains one of the few authors who can claim to have created a sub-genre and an immortal legacy of dread and wonder. His weird tales tap into a primal terror of the unknown, the stranger, the ancient and abandoned: the forces beyond human comprehension or control.

You know what Lovecraft ISN’T about? Meet-cutes with hippies. Nicholas Cage is a fascinating actor, but gone are the days he might have been the mark of a quality production. Now whatever he inhabits is bound to be either a low tier production desperate for a celebrity, any celebrity, to headline them or something so inherently wacky that his overacting will be hidden. This is the latter. Color Out of Space is practically a parody of Lovecraft, not an adaptation or even a discernible homage.

And if THAT’S the case then The Necronomicon is literally a work of forbidden esoteric occultism written by a crazed person which was never published. I have SERIOUS doubts in any situation where half of what H.P wrote is canon reality that something like The Neconomicon would be widely available, copied, even referenced. But in a film like this showing off the book’s title is meant as a nod to the fans…and a meaningless nod at that. It’s like if Frodo in Lord of The Rings for some reason owned a stuffed doll of The Dark Lord: it would be an instance of reference alone without any thought beyond this. And that’s what Color is: one giant inside joke and excuse to play with effects.
It’s not just a nitpicking fan’s problem here. For a supposedly grounded and frightening horror movie you kind of hope the writer/director cared enough about their world to make it feel real as compared to the otherworldly menace that would soon turn things upside down.

Instead of a humble but all-too-human rural farming family, The Gardners are now a yattering band of ex-urban quirks. We’ve got the struggling artist who skipped town with his family to avoid all the pressure of the big city and his aging wife concerned about her love life. She needn’t be as her hubby is a decent if quirky fella. We’ve got the irritatingly twee Wiccan daughter who rides around on a flipping horse and has a tattooed pentagram on her bare feet. Tommy Chong is in this movie with a cat named G-Spot: the tone is that broken.

The writing is hilariously bad at times. I guess that made me laugh. I realize The Gardeners are supposed to be likable and relatable with their little foibles, constant swearing, and amusing little awkward asides. It seemed too calculated to be charming to me, and I couldn’t wait for the space magic to come down and make them more entertaining.
However therein lies another problem. There was a big point missed fundamentally for this film as a riff on The Color Out of Space story. The ‘color’ itself is supposed to be invisible. The frightening idea which was so influential it spawned numerous imitators was the concept of something so far outside of ordinary experience, something humans couldn’t even witness properly, which could still negatively effect people, playing upon their paranoias while draining them of life in an insidious and subtle takeover.

“It was like a color I’d never seen!” sputters Nick Cage at one point. I’ve seen it, and anyone watching the film has seen it too. It’s purple…probably mauve. Sorta pink. These are terrestrial colors. Not usual, but not unheard of.
All the computer animation in the universe cannot hide how completely surface level this mystery from the void has become. Replace ‘the color’ with, say, the alien symbiote from Venom, and the story is basically exactly the same. This is not an inscrutable cypher…it’s a big, bad, vivid monster which turns some people into zombies and some into mutants. It even makes lightning storms. Spooky!

This film wants to be a slow-burn psychological thriller about decent people corrupted by a sinister force…but it comes across more as half-failed comedy and half classically bad sci-fi effects fest. If this was made in the fifties it actually wouldn’t be much different except for the lack of digital effects. We’ve got drive-in movie quality overacting, pointless narration to hammer in the plot and cheap thrills punctuated by bombastic music stings.

When you can’t tell why all the vegetation is mysteriously dying and your family members have periods of lucidity followed by bouts of madness, that’s freaky. What’s NOT freaky is when an alien monster takes over your telephone and creates CGI insects. Is this purposefully terrible or a failed attempt at being surreal? The film itself it more interesting than the hackneyed attempt to drain the plot of all its nuance.

Apart from the fact this is a previously ousted director trying to redeem himself and has a well-known cast, this film should really be considered the second coming of the infamous Wicker Man remake: only not nearly as funny unfortunately. At least it’s short.

Change the title to Invasion of the Pink Evil or something I might be more forgiving, but now Color Out of Space will be synonymous with this disappointment and there will probably not be more adaptations of this excellent story for a long time. Forgive me for feeling less than charitable towards an otherwise harmlessly goofy flop.