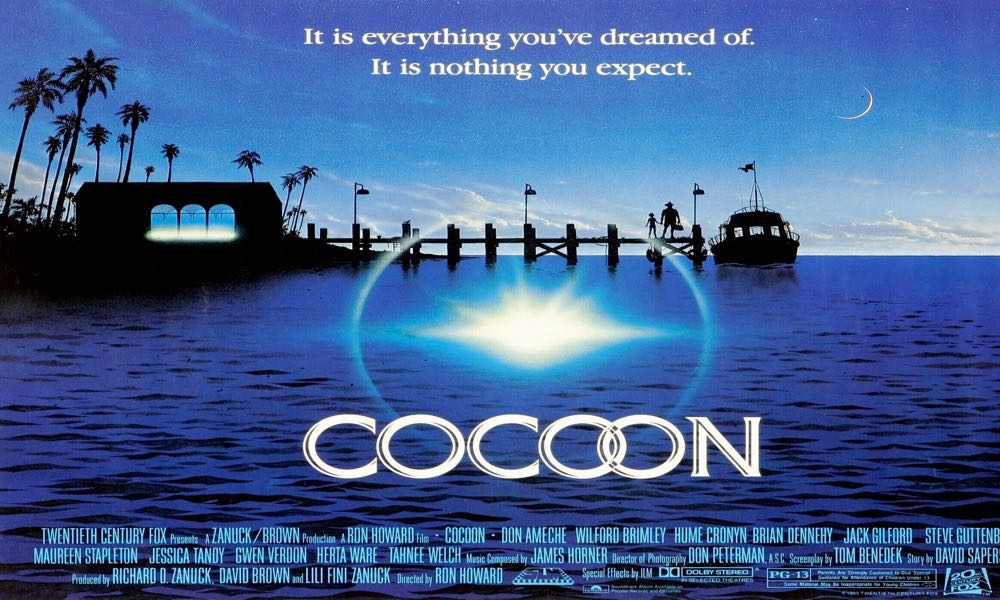 Directed by Ron Howard? Wilford Brimley is less than ancient, and Brian Dennehy is still young? Steve Guttenberg as a male sex symbol in shorts, and aliens who look like members of ABBA? It must be the eighties. This optimistic family-friendly science fiction film is one of the most eighties movies ever made, and not just because the fashions and hair-dos leave the unmistakable time-stamp of that drug-fueled decade, but because it’s the sort of science fiction that made the eighties unique. Cocoon represents part of the transition from the “B”-style science fiction movies of the fifties, sixties, and seventies to a new more family-friendly brand of science fiction that included the mainstream by making it a part of the story.

Of course, the timeless themes dwelt on in Howard’s modern classic about the passage of just that, time, are universal and something anyone can relate to anywhere. The ideas represented by the alien pods as a fountain of youth and source of rejuvenation, along with the idea of second chances and escaping the inevitability of the downside of old age and death are universal and make it a film anyone can relate to no matter who you are or where you’re from or when. 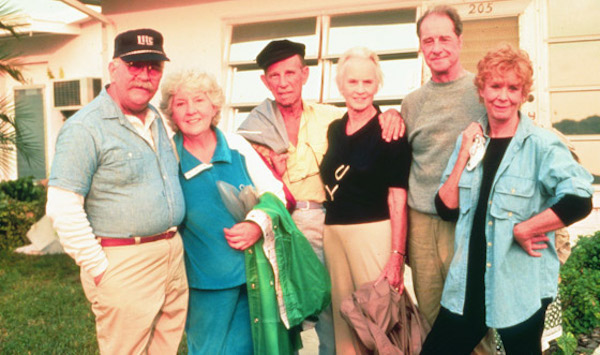 The ensemble cast of senior citizens in this film, portrayed by Don Ameche, Wilford Brimley, Hume Cronyn, Jessica Tandy, Maureen Stapleton, and Jack Gilford, and Gwen Vernon are all excellent. Their performances emphasize that getting old is not necessarily a cringe-inducing disgusting death sentence and that the twilight years can still be fun. Of course, the movie does go too far in some places and gets downright silly, like when Don Ameche starts breakdancing in a nightclub courtesy of some extensive and obvious editing.

Jack Gilford gives a most remarkably memorable and convincing performance as the one guy in the group of friends who refuses to go along with the idea of using the pods to do things over and get a second chance. Bernie (Gilford) refuses on the grounds his gut tells him its just not right and that they should be happy with the lives they have already lived. He is not a downer; he is just the voice of the opposition and the reasonable idea of considering all of the angles. He makes a good case for accepting things as they are, a life well lived, the rewards of old age and the inevitable conclusions, but the others go with the aliens anyway and choose eternal immortality and youthful vigor.

Of course, watching Hume Cronyn and Jessica Tandy work together is always a treat, the old, married, master actors have such effortless chemistry that makes any scene they are in together seem special. Wilfred Brimley was enjoyable as the old bear-like leader of the group of friends, and Don Ameche was very amusing as the group’s self-proclaimed Lothario.

Where is Steve Guttenberg today? I had forgotten, Steve Guttenberg was a big f***ing deal in the eighties, I  mean the guy is an icon and sex symbol of the decade. He was everywhere back then, and this movie reminds us why, he was a cute, somewhat generic, young non-threatening Jewish guy with a lot of boyish appeal. He gets the best line in the movie when he says “If this is foreplay, I’m a dead man.” It’s a family film, but it does touch on the subject of sex with aliens.

It’s interesting to note that according to Wikipedia Robert Zemeckis was initially hired as director, but after spending a year working on it in development, he got fired before production began as 20th Century Fox (the studio financing Cocoon) felt he was box office poison. This was due to his films I Wanna Hold Your Hand and Used Cars both being critically acclaimed, but commercial failures and the studio felt his then-current film with Fox, Romancing the Stone would also be a flop after the studio previewed it, so Ron Howard was then hired as director.

The film was a box office hit, making over $76 million in North America where it became the sixth highest-grossing film of 1985.

Admittedly the narrative of Cocoon is full-on corny. Overly sentimental and emotionally manipulative, which makes it perfect for this time of year, and there’s nothing wrong with that is there? Happy Holidays!