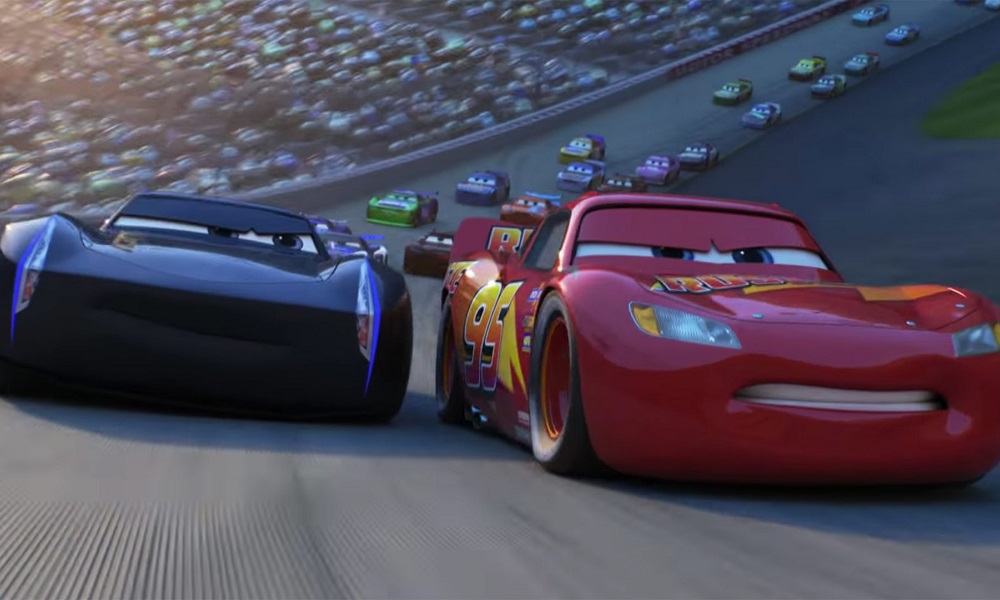 The Cars franchise always had to grapple with the reality that its universe was just plain weird, and by now, accepting that weirdness constitutes a rule of the game. And they’ve never been bad films, though they hardly rank at the top of Pixar’s considerable canon. Cars 3 finds the same agreeable groove that the first film did, and while you still need to get around those uncomfortable questions like “where do the car children come from?” and “how do they handle tools without thumbs?” this go ‘round at least ensures a few tangible rewards if you do.

After the well-meaning but ultimately pointless spy spoof in the second film, Car 3 returns to the NASCAR circuit, where Lightning McQueen (voiced by Owen Wilson) is still the king of the track. But a young new breed is rising and slowly forcing his competitors out. Led by Jackson Storm (voiced by Armie Hammer), they start racking up wins and putting the heat on fading champions like McQueen, who has to decide whether he’s going to rise to the occasion or finally hang up the tires for good.

Again, that can spiral into madness very easily, since the first question becomes “why can’t he just install some upgrades?” Racing enthusiasts might respond that the driver matters more than the car, but in this case the driver IS the car, and how does THAT work, and then you’re asking how they shift gears and the whole thing descends into a pile of staggering illogic.

But gentle ribbing aside, director Brian Fee finds a lot to talk about in that age-old dilemma of when to give way to a younger generation, and how the glory days you thought would last forever must sooner or later come to a halt. McQueen’s characteristic confidence sets him up for another big fall the way it did in the first film. Cars 3 benefits in part because the dilemma holds new wrinkles, but also because it elegantly ties in the film’s other central character. McQueen’s new trainer Cruz Ramirez (Cristela Alonzo) has spent her life on the cusp of the racing life, without ever breaking in, and self-doubt now dogs her efforts to take that next step.

The two challenges dovetail nicely into each other, and Fee tricks them out into an agreeable little story about mentors, students and the hidden joys when one becomes the other. He doesn’t muddy the issue by trying to stuff too much into the equation, and while that sidelines some of the series’ old favorites (the gang from Radiator Springs gets a few moments at most), it keeps the story moving along quickly.

Add to that Pixar’s typically impressive visuals, with landscapes as gorgeous as ever and racing sequences full of intensity and excitement, and Cars 3 admirably does the job it sets out to do.  The look remains striking and distinctive, and the original notion of the American road trip slides easily into McQueen’s efforts to make peace with his fading glory. Fee adds some beautiful montages, as well as a few scene-stealing cameos from “local color” to keep the stew bubbling (Lea DeLaria’s demolition derby school bus is a hoot).

Perhaps his biggest secret weapon on that front is the return of the late Paul Newman as McQueen’s old mentor Doc: seen here in a series of flashbacks but punctuated by “new” dialogue cribbed from recordings made during the first Cars. It sounds like a gimmick, but it actually underscores the central premise in a lovely and respectful way. It’s the nicest surprise in a movie full of them: not one of Pixar’s greatest (or even the best release this month), but knowing its path to the finish line and making sure we get there with a smile on our faces.

One thought on “Cars 3 — Movie Review”