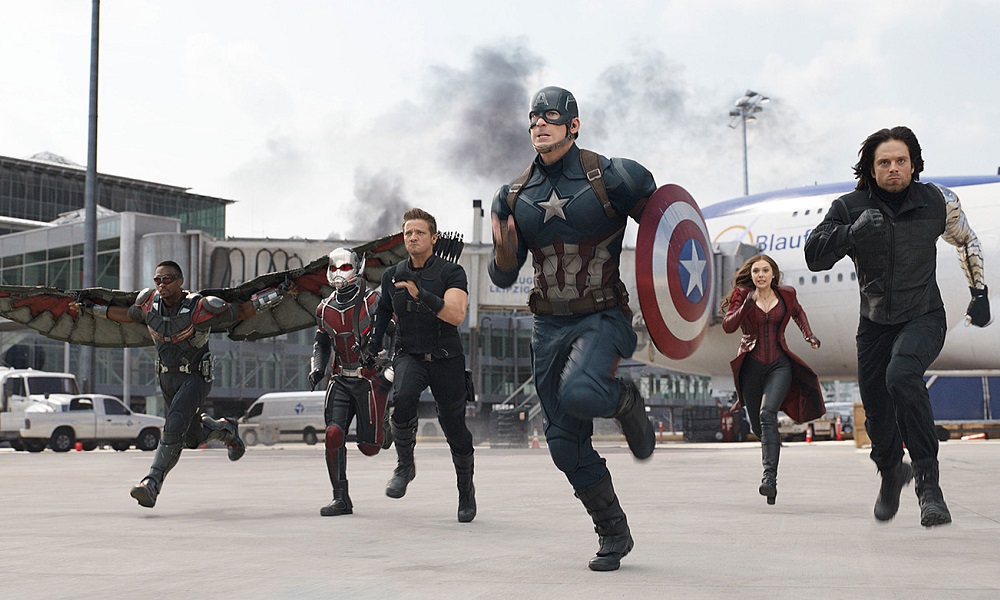 If you have any remaining doubts about which comic book titan still rules the roost, Captain America: Civil War will lay them all to rest. It carries the same basic themes as March’s Batman v. Superman, and like that earlier film, it pushes a climactic fight between two feuding superheroes as its primary selling point. There, all similarities end. For while Batman v. Superman was assembled through corporate groupthink and artistic incompetence — desperate for DC to catch up with the MCU powerhouse in one fell swoop — Civil War expertly expands upon the good will earned through all of the Marvel movies preceding it. It’s rich and textured where its rival is ham-handed and tone deaf; bright and insightful where BvS is sullen and ignorant. It celebrates superheroes not only as a means of serious social commentary, but just as a way to have fun on a Friday night. It takes its scenario and its characters as seriously as its rivals take theirs, but with enough self-respect to joke about it all, and with a light tone that never undercuts the drama at its core.

Above all, it’s simply a well-made movie: juggling a staggering number of characters with absolute effortlessness and readily expanding Marvel’s collection of heroes without cramming them in. (If you want a more insightful breakdown of the two films, check out Jen Yamato’s terrific piece over at The Daily Beast.) While BvS hides behind half-hearted claims of box office success, Civil War simply gets down to business… and reaps the rewards accordingly.

And it does feel like an Avengers movie, despite the action staying centered on Chris Evans’ Captain America. Everyone except Thor and the Hulk is in attendance, plus newcomers like Tom Holland’s Spider-Man and Chadwick Boseman’s Black Panther. They’re drawn into conflict when an operation in Africa goes south, leaving the world wondering who polices these heroes and whether they require more supervision. Having just put his foot in it with the whole Ultron unpleasantness, Tony Stark (Robert Downey, Jr.), is full score behind placing them all at the beck and call of the UN, while Cap, distrustful of numerous issues that such a bargain would entail, is prepared to go it alone. Things heat up when the Winter Soldier (Sebastian Stan) pops up again, and Cap has to choose between preserving the Avengers and helping his wounded and confused friend.

The breaking point is slow in coming, but directors Joe and Anthony Russo ensure that we’re never bored in the interim. The dramatic build-up is gradual, but takes place with a healthy sampling of terrific action pieces, and the kind of character interaction that made The Winter Solider the best MCU movie to date. Considering the sheer number of characters on display, it’s amazing to watch: every figure getting their moment and playing their part without once feeling forced or superfluous.

The sole exception might be Spider-Man, whose connection to all of this is a tad labored and feels too much like they’re setting up his new movie instead of playing a part here. Civil War overcomes it partly though casting (Holland is pitch-perfect), but also by letting Spidey interact with the other heroes in a larger universe. We haven’t seen that in any of the five previous Spider-Man films, and the novelty gives him a breath of fresh air that he desperately needed.

The Black Panther has no such baggage to carry, and with Boseman front and center through most of it, we get the sense of a new star in the making. His searing charisma and undeniable confidence play well with the rest of the team, but unlike Spidey, he feels like a natural and organic part of the story throughout. The prospect of three or four more stand-alone Black Panther movies becomes a hell of a lot sexier after this outing.

Slipping quietly under the radar in all of this is German actor Daniel Bruhl, whose Baron Zemo serves as puppet master to the unfolding mayhem. The Russos take him in some surprising directions that make him far more than just a Red Skull clone, and his reasons for doing so display a richness of character that may catch hard-core Marvel fans off-guard.

The rest of the gang knows their parts too well to drop the ball, however, and with Evans and Downey firing on all cylinders, there’s nothing left to do but sit back and enjoy the fireworks. Civil War marks not only another triumph for the MCU, but solid proof of why they’ve been so successful. I’ve argued elsewhere that Marvel’s trick with these movies is simply transferring the feeling of subscribing to a monthly comic to the big screen. The groundwork has been laid, the characters have been established and we all know who these people are by now.

Civil War wastes no time in providing new and thoughtful dilemmas to put these characters through, using our familiarity as a gateway to more interesting things instead of an excuse to go through the motions. The MCU hasn’t been perfect, but the pattern they’ve established is eminently reliable, and we’re happy to indulge decent-but-not-great efforts like Age of Ultron to get to the real goods here. That’s a trust established over eight years of diligent effort, coupled with deep respect for characters and fans alike. BvS used our familiarity with its heroes as a con job. Civil War provides demonstrable proof as to which method works best.