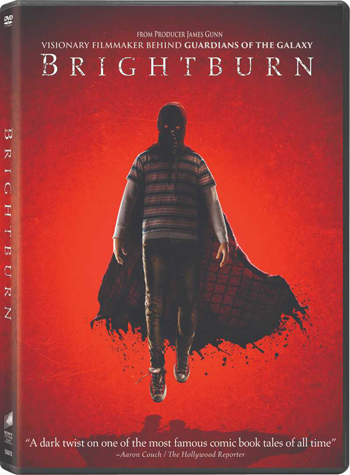 What If Superman had arrived on Earth as a conqueror instead of a protector? That is the premise behind Brightburn which takes the Superman story and turns it on its ear. Tori (Banks) and Kyle (Denman) Breyer live on a farm in Brightburn, Kansas and have been unable to have children. A space vessel crashes onto their farm carrying an infant boy. The Kents…err…the Breyers, hide the ship in their barn and adopt the child as their own. So, OK perhaps this was a viable idea in the late 1930’s rural Kansas when people didn’t have computers, the internet, TV, or even telephones. It would see a great deal more difficult to somehow explain away suddenly having a child in this information age. But, let’s just roll with it.

The couple names the baby Brandon (Dunn), and he grows up as a shy but intelligent boy. As he hits puberty, Brandon begins to become rebellious and disobedient. While Tori chalks up Brandon’s behavior to just getting older, Kyle begins to suspect that there is something more sinister going on with his son. Brandon hears alien voices in his head, coming from the hidden spaceship. He finally figures out their ominous message, imploring him to “take the world.”

Soon Brandon finds himself involved in increasingly more violent and aggressive incidents in which he displays superhuman strength, speed, and the ability to fly. It isn’t long before the Breyers realize that they made a serious error in rescuing the alien infant from wreckage of the spaceship.

Brightburn was written by Brian Gunn, the brother of filmmaker James Gunn who served as the film’s Producer, and Mark Gunn who is his cousin. The Gunns ask a question that comic book fans have pondered for some time…i.e. what if Superman had been a villain? But beyond that question they don’t venture out of the cozy comforts of what Superman creators Jerry Siegel and Joe Shuster gave to the world eighty years ago. Other than being set in present day the basic origin of Superman’s arrival on Earth is lifted almost scene for scene. In fact while we at least learn that the infant Kal-El was sent away from his doomed planet of Krypton by his parents, we learn almost nothing about Brandon’s origins or his alien race.

Mid-credit scenes show other super-powered beings wreaking havoc upon the world. Are we to assume that these beings are from the same world as Brandon? Are these different aliens? Mutants? Who knows? The Gunns and Director David Yarovesky take the path of least resistance. At best this was like an issue of the old Marvel Comic book series “What If?” which proposed new ideas on established characters but these were strictly one-shot stories and you know that when you pick the book up.

While Brightburn is well-crafted and well-acted, especially on what was a scant budget by today’s standards, you can’t help but walk away with more questions than answers.