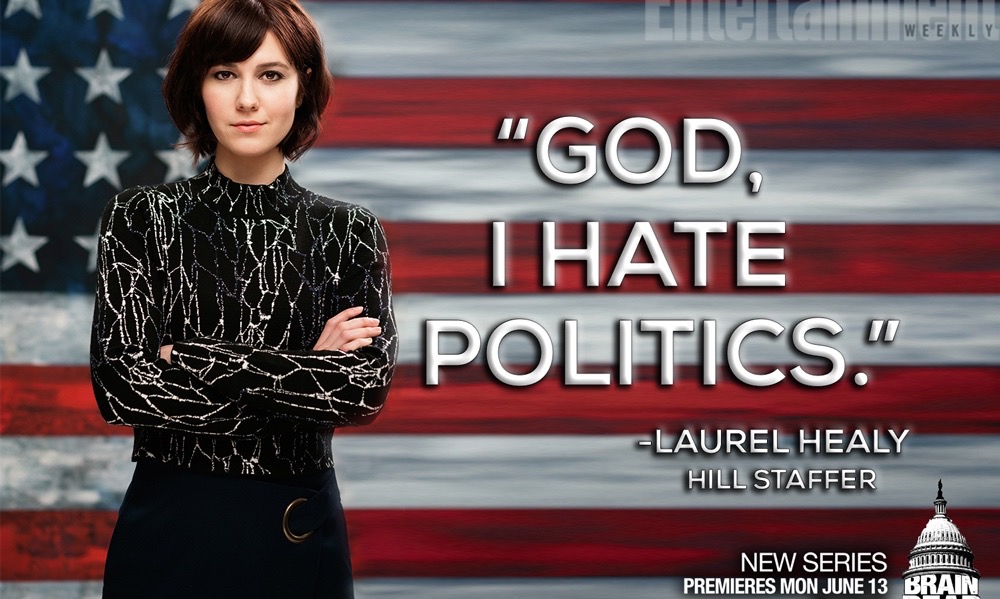 The scariest thing about this series is not the alien bugs, but how much the depiction of how things are done within the halls of government, and without, rings true to the reality of what is going on in the world today.

The bugs seem to have gotten their fill of government officials for now and are moving on to the voting public, continuing their campaign of radicalizing everyone they infect.

The episode begins with what seems like two average college-educated thirty-something apartment dwellers that are neighbors, follows them after the bugs strike, and portrays the effects it has on them. They both become aggressively politicized and polarized as a result of their encounter with the aliens. There is still no endgame forthcoming in explaining the aliens’ activities, just more of the same.

Both become outspoken in their views, starting with online forums, and then verbally begin spouting every political catchphrase in existence. A relentless stream of the sorts of cliched politic-speech we hear all the time these days online, on tv, and on the radio.

Laurel is accosted by one of these people in her offices, and when he says things that could be taken as a threat to her physically, it sends up a red flag. He appears once again later, and even though it doesn’t seem like he means her any harm, he is brandishing a large chef’s knife and appears to be stalking her. He is freaking out because PBS might be harmed as part of a deal made to end the shutdown.

Laurel is once again portrayed as being attracted to both Gareth (Aaron Tveit), the Republican staffer, and Anthony (Charlie Semine), the FBI agent, and when she goes out for drink with Anthony, Gareth arrives at the same bar, with the very busty Misty Alise (Megan Hilty), the show’s equivalent of a Fox News right-wing pundit. This, of course, makes for an awkward situation, and Gareth is obviously jealous, and digs up a file on Anthony, that he later gives to Laurel.

Meanwhile, Red Wheatus is shown attending the creation of a radical right-wing group calling themselves One Way, led by the other neighbor introduced at the beginning of the show. Again this group spouts a lot of cliched right-wing rhetoric, and when they meet with Gareth later, they casually mention having links on their website to resources for acquiring and making bombs. Things are escalating fast, faster than Gareth is prepared for, and he tells them this is not a good thing.

On another front, Gustav (Johnny Ray Gill)  shows up during Laurel’s date, with his cat in tow, and drags her off to see Dr. Rochelle Daudier (Nikki M. James) who they scan the cat’s brain with, and parts of the cat’s brain are missing. Gustav makes the leap that victims of the bugs have half their brains missing and because of that, display symptoms of being off balance.

This, of course, supplies a very amusing analogy for the state of our government, our elected leaders, and the radicalized elements of the population. Hilariously, obvious examples of this lack of balance are portrayed throughout the rest of the episode.

Dr. Daudier is still not satisfied with what she has seen and requires a living example of an infected human being to scan before she will be willing to sound the alarm regarding the bugs. All of them still do not suspect the bugs as being of alien origin.

They decide on Abby, Laurel’s friend, as a likely example that will serve as proof of the effects the bugs are having on people. Abby refuses to cooperate, using all sorts of reasonable sounding excuses why she won’t submit to being scanned. When  Laurel convinces Anthony to use his legal power to compel her to cooperate, Abby reacts poorly and is irate at the nation she will be forced to comply.

Using the excuse of getting her jacket and phone she reenters her apartment, and without hesitation goes out on the balcony and does a header off it onto the parking lot below, which kills her instantly.

Back on capital hill Laurel’s brother, Senator Luke Healy (Danny Pino), has been forced by one of his largest contributors to finalize a compromise that will end the government shutdown. He rigs a sequestered vote, by manipulating the letter of the law in these cases,  much to the dismay of his democratically, Ella Pollack (Jan Maxwell) and Red Wheatus (Tony Shalhoub) alike. There’s going to be hell to pay, and I suspect that what next week’s episode will be all about.

Also of note, is that Laurel has finally done the deed with one of her suitors, surprisingly, she picks Anthony, and afterward when he falls asleep, she spends time catching up on what her brother has been up to and the deal he rigged to end the shutdown. She falls asleep on the sofa and rejoins him in bed in the morning. The episode ends with her noticing something odd about his ear while they chat. Has he been infected too?

This episode had some good moments, and when Abby jumped off her balcony, it was creepy and disquieting, both because of what she did, and the calm, insane manner in which the show depicted how she did it. It had a more shocking effect because when a show you expect to be mostly light-hearted in its portrayal of even the sorts of events this one portrays, it has an even more horrifying impact than when you are watching, for example, a horror movie where these sorts of events are expected.

The half a brain thing was hilarious, not in a laugh-out-loud sort of way, but in a creepy, this is a bit too close to reality way.

I suspect this was meant to be a bridge episode, building on events that led up to it, and what is yet to come in this darkly amusing, quirky, and very unusual show. One true measure of how much you like a show can be established when that show does not air at its regular time, and unexpectedly skips a week.

That’s what happened to me last week when the show was not on, and I didn’t expect it. I missed it more than I would have expected, and I am hooked on it more than I knew. It hooked me without me knowing it, in a manner was nothing less than insidious, much like the bugs it portrays.

The series continues the difficult task of trying to balance the elements that make it what it is, and I am hoping next week’s show has more emphasis on the science fiction aspect of the series and not as much on the political stuff, because like Laurel says, I hate politics, and there’s still a lot we don’t know about the bugs, what they are they doing, and why. [review]

One thought on “Braindead Review : Wake Up Grassroots….”