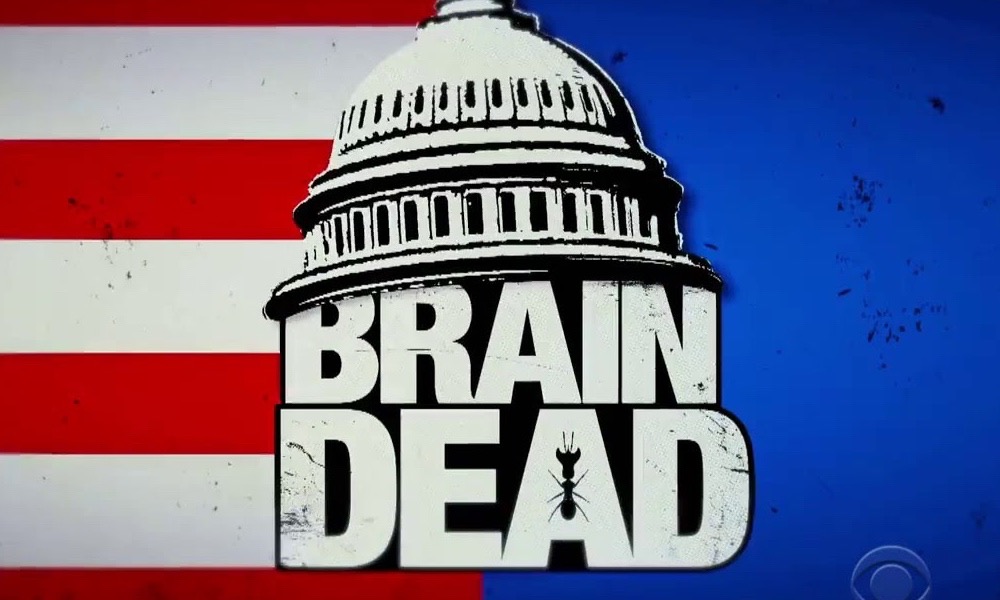 A few years back in summer, an excellent science fiction hybrid political satire found its way onto network TV when I least expected it. That series combined an age-old sci-fi trope. The idea of people controlled or ‘possessed by an alien being is not a new one. It’s even older than the 1956s classic Invasion Of The Body Snatchers. This series took that premise, mixed in some modern sensibilities and cutting political satire to achieve a genuinely memorable, charming, and not to mention very amusing show that was one of the most pleasant surprises of the TV viewing year. I refer, of course, to network televisions sleeper comedy of the year 2016, BrainDead.

Part mystery, reminiscent of a good Scooby-Doo adventure, part political satire. This series serves up some comical but thought-provoking moments memorably and charmingly that were surprisingly satisfying. The series covers a wide spectrum of the human condition pretty well and does it uniquely all of its own. This is both intelligent and witty. This is one of the best recent little pieces of genre writing on television that did not rely on sex or violence to entertain.

While most notably reminiscent of Invasion of The Body Snatchers (1956, 1978, etc.), The difference here is said invaders are bugs from outer space that arrive in a meteor. Bugs, resembling ants, methodically go about entering the heads of several characters in the show, begin eating their brains, and affect their behavior again in an almost comical manner.

The show’s main thrust is the alien invasion and its effects on politicians and politics. It turns out the space bugs have a political agenda all of their own and will do anything to see it become a reality. Braindead wastes no time portraying the alien bugs’ activity and their effects on the people they encounter while also introducing a romantic storyline with modern sensibilities and its small ensemble cast.

Not familiar with this title? BrainDead is an American political satire science fiction comedy-drama television series created by Robert and Michelle King. The series stars Mary Elizabeth Winstead as Laurel Healy, a documentary film-maker who takes a job working for her brother Luke (Danny Pino), a U.S. Senator when the funding for her latest film falls through. Assigned as his new constituency caseworker, she discovers that Washington, D.C. has been invaded by extraterrestrial insects eating the brains and taking control of people, including Congress members and their staffers. Much of the series’s internal comedy was that politics altered reality that only a few people noticed in Washington DC.

Laurel (Winstead) is the central figure of this show, allowing us to follow her around Washington. Most of the cast of BrainDead is composed of thirty-somethings with only a few exceptions. The series also spends a great deal of its time focused on conservative leader Red Wheatus (portrayed by Tony Shaloub). The entire supporting cast is excellent.

In case I wasn’t clear, overall, BrainDead is one of 2016’s most pleasant surprises.