What are you Boarding School?

Ordinarily I like productions which blend genres, invent new ones, and defy conventions but there’s a difference between mixing and matching and coming across as scattershot. The Evil Dead is a horror comedy series which plays every event tongue-in-cheek which makes even the gouts of the red stuff still work in the context of an amusing nigh spoof of horror films. On the opposite end of the spectrum The Exorcist is a straight-laced dramatic piece devoid of overt japes and deliberately amusing characters. 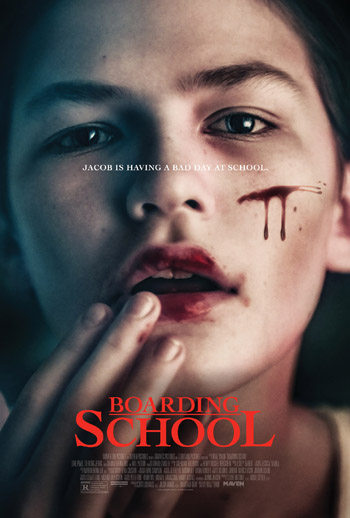 Boarding School seems to want its many cakes and eat them too. It has elements of splatter, dream sequences, possible possession, conspiracies, relationship drama, gender questioning, slapstick, children’s adventure story with allusions to fairy tales but in the same film as explicit sexual themes involving minors, abuse, and insanity.
When I felt the story was becoming dramatic, something goofy would happen. When it started to morph into a ghost story the genre would change abruptly into a psychodrama and from a romance into the polar opposite in the space of a transition. If you’re enjoying the weirdness it becomes boring, and if instead you like the slow pace and build of atmosphere the film will swat you in the face with a poorly timed jump scare.
Indicative of the entire production is a moment following a gruesome bludgeoning in which a character mutters in a monotone ‘No duh’. Are we supposed to cringe? Shiver? Laugh?

I did a little too much laughing for such a patently miserable story because of I began to analyze the film no longer as a cohesive work but more like a puzzle continually asking the same question to me. Not who murdered who or what’s up with the bizarrely out-of-date boarding school of the title.
The question was instead ‘Who is supposed to enjoy this?’

Boarding School follows the (and it’s impossible to describe it in any other way) wacky adventures of Jacob: a young boy from New York as evidenced by his unconvincing accent. The acting of Jacob and everyone else is uniformly very good, but as mentioned the real stumbling block consistently is the accents which seem to exist only for one bad joke involving a mispronunciation. Jacob has a problem. His grandmother is dead and haunting him, perhaps compelling him to dress in her clothing and dance to old timey music. If you’re looking for a positive portrayal of gender identities or cross-dressing again you’re better off looking elsewhere: Jacob’s quirk of costume is treated alternatively as a curse and a punishment. After Jacob’s histrionic mother has had enough of his night terrors she sends him to a creepy old building which serves as the unlikely boarding school for seven children in total. It’s staffed by two adults who spend the time they aren’t dictating in classrooms and caning students being completely absent.

Which is an escalating issue as most of the students are insane.

Again, the disconnect arrives as there seems in some moments the child with Tourettes is being framed as a punchline, which continually struck me potentially offensive. It’s one thing to imply someone has difficulties but in the same film which does have the guts to show some of the grislier aspects of insanity there are beats clearly intended to make you laugh at the poor crazies. You’re clearly meant to sympathize with the trapped students, especially as mysterious and horrific events begin to occur. But the barrier to believing in these kids and wanting them to escape their dire situations might have been improved if even the adults didn’t act like raving lunatics.

A lot of characters in this production are sketched very cartoonishly. The motor-mouth obsessive kid rattles off facts like Hermione Granger without a filter. The headmaster is the same kind of characterized rod-wielding literally bible-thumping antagonist that would probably feel more at home in a minor work of Dickens as opposed to a modern context where he seems hilariously out of place. In fact everything in the school is anachronistic to a ludicrous degree. The headmistress wears a frumpy turn of the century apron and dress that looks victorian, marble sconces hold the lights, wood panel floors creak, and there’s even a spiral staircase. I realize this is all intentionally harkening back to the Old Dark House style of films but we do see that this story is supposed to take place more of less in modern times. If the school wasn’t enough of a time traveler the kids all talk like mini-adults, swap comic books like it’s the 1930s and apparently child protective services don’t exist in this universe. Or police.

Something so exaggerated one moment and so intent on wringing emotions the next just strikes as not complex but confused. There is some super controversial ideas at play here and in such a shaky production Boarding School can’t quite do justice to the themes it tackles superficially that will raise all kinds of hackles. We’re taking the sexuality and death of children. That tends to pop monocles at the best of times.

I’ll avoid spoilers but I could almost swear this film was composed backwards: the big reveals planned and then the production worked in reverse until the beginning so that the revelations would make some kind of sense. This is an ordinarily commendable practice but the preposterous twists lead to equally ludicrous resolutions. It’s too unbelievable to be effective, but it’s certainly impressive.

And that’s what Boarding School is: impressive, but not effective. Intriguing, but not compelling. Check it out for the weirdness but don’t expect much beyond that.

Given that the credits song is a pounding metal score, maybe the film didn’t intend anything more.