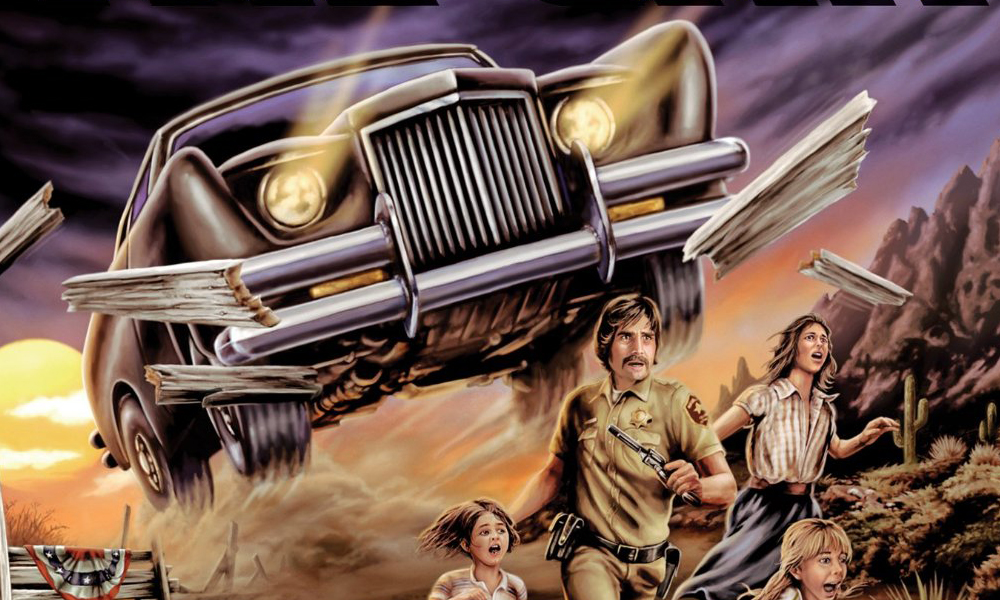 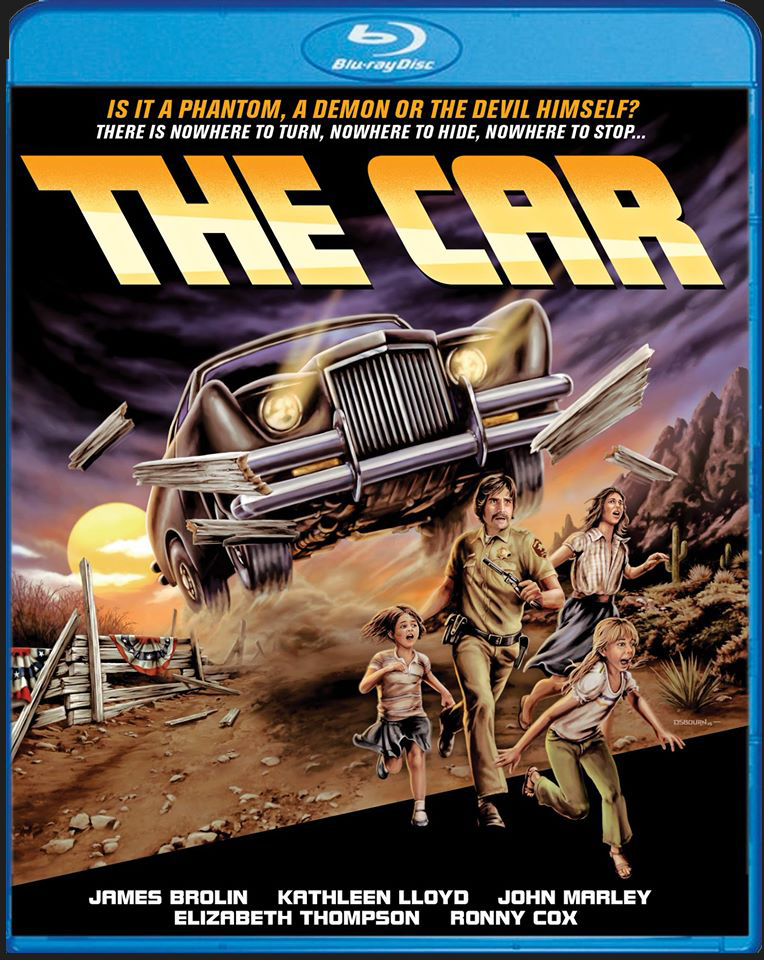 The first time I heard of Elliot Silverstein’s The Car (1977), was in an interview with Guillermro del Toro. Apparently, the director and horror movie enthusiast drives a replica (or last surviving prop) of the car from the film around Los Angeles. The Car never really crossed my path again until Scream Factory announced that the film would be arriving on Blu-ray this December. I may be a few weeks early on The Car’s release date, but I figured this would give you plenty of time to order the film (right here). Yes, I liked it that much.

It was easy to see what The Car was supposed to be, a Jaws (1975) rip off. Which is extremely funny because if you know anything about the genre, cinema, or even Jaws, Jaws was nothing more then Steven Spielberg’s Duel (1971) only set on water. To take it one further, Universal Studios, Jaws’ own studio, ordered The Car to be made. The formula worked, so why not thrill audiences with it again?

The Car opens with the murder of two innocent bikers. No rhyme or reason, they are just in the wrong place at the wrong time. The death toll rises as another innocent victim is slaughtered on the road and the local police department is brought into investigate the case. Where The Car takes a departure from other Jaws copycats is that it actually develops its characters. Whether it is Officer Wade Parent (James Brolin), his girlfriend, Lauren (Kathleen Llyod), or even an abusive husband, Amos (R.G. Armstrong), all have something at stake or something to offer to the story. They aren’t just there. All of their actions have consequences, so when the alcoholic sheriff’s deputy, played by Ronnie Cox, falls off the wagon, lives are put into jeopardy. I was amazed that this much care and thought were given to this B-Movie, but, as you can tell from the 2015 director’s interview, Silverstein tried to do so much with very little.

The villain of the film, yes, the car, had more character than most killers in a slasher film. First and foremost, Silverstein kept you guessing just who was at the wheel. There is a point of view, from inside the car, that is nothing but an orange filter. A simple camera trick, but it works effectively well, far better than any CGI effect. In fact, the design of the car is also a great character trait. The car doesn’t even have door handles on the outside. How does one get into it? This is revealed in a showdown between Brolin’s character and the car. Again, simple, but effective. This modified 1971 Lincoln Continental Mark III black coupe really looks as if it crawled right out of Hell. It is not a beat up hunk of junk. In fact, it looks as if it is something that the devil himself would drive.

What I really enjoyed about this film was its sheer ferocity to take the genre and go where it wanted to. If you are looking for answers (as in “why”s and “who”s), you may be disappointed. Are there leaps in logic? A few, but none that make you dislike the sheer awesomeness of a film that is Hitchcock’s The Birds, only there is one bird and it is a car.

Shout! Factory’s horror division, Scream Factory, has done it again with another incredible Blu-ray release. There are incredible interviews here from some of the cast and crew. Sadly, there is no James Brolin interview on this Blu-ray. The picture quality, however, is amazing. In fact, if you pretend it’s Josh Brolin and not his father James, it looks as if this film was shot earlier this year. There is a great contrast to be made by watching the trailer and then the film.

Pre-Orders of The Car include a FREE 18″ x 24 poster from the film. Order it HERE from Scream Factory!

Halo: The Fall of Reach