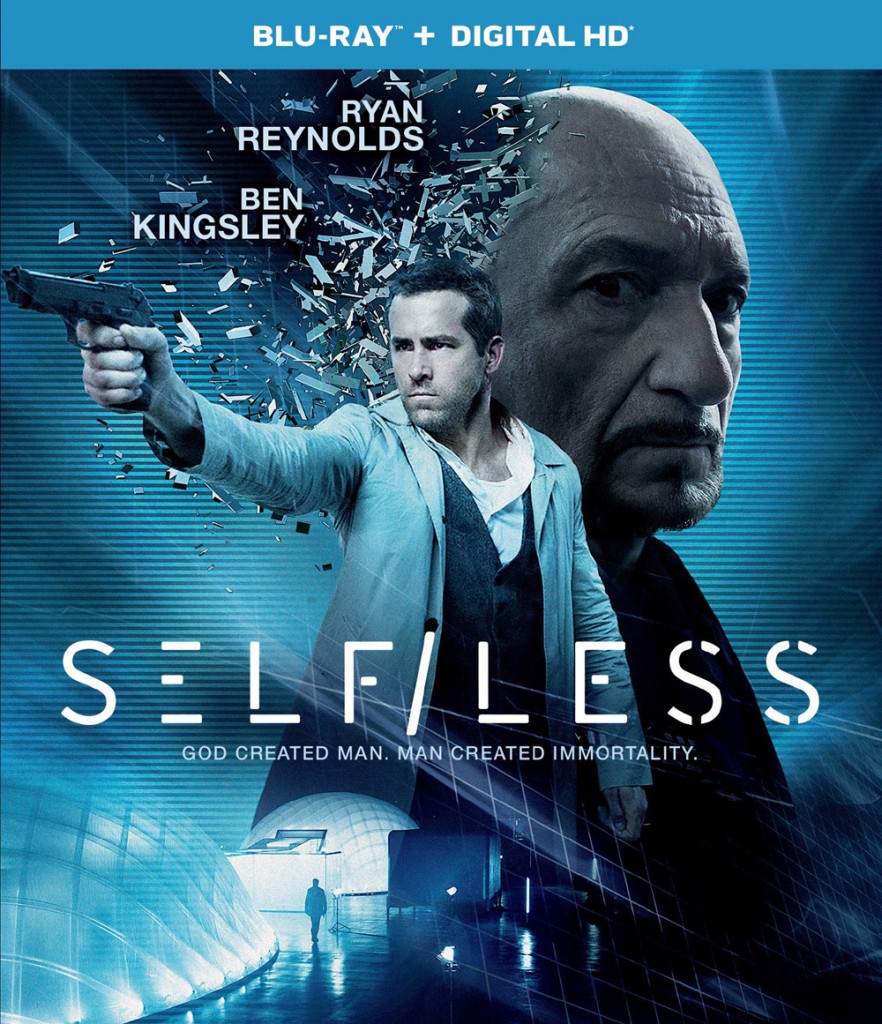 Welcome to The Sci-Fi Movie Page’s Blu-ray Shopping Bag. Up this week the Blu-ray release of Self/less. Bear with me as you will experience the film as I did in the next paragraph.

The Mandarin is dying. He confides in his best friend, Firestorm, that he doesn’t have much time left. To cheat death, the Mandarin cuts a deal with Ozymandias to put his mind inside the body of Deadpool. The only problem is, Deadpool’s body is not a genetically grown clone of Deadpool and Deadpool wants his body back.

No, this is not a great Marvel/ DC Comics crossover, nor is it a work of fan fiction. It is in fact the plot to Tarsem Singh’s (The Cell) latest picture, Self/less. Damian (Ben Kingsley) is dying and buys from Albright (Matthew Goode) a younger body. He believes that this radical new procedure is a way to cheat death. His mind will be transferred into this young body, the body of Mark (Ryan Reynolds). The only problem is, when Damian wakes up, he keeps having visions of a life he never lived. Damian needs to find the one man he has always trusted, Martin (Victor Garber), but will he believe this insane story?

The plot and trappings of Self/less are nothing new. You have your dying rich old man who is so desperate, he will try anything to cheat death. Of course not all is as it seems. Tarsem Singh, who is better known for his insane visuals in such films as The Fall and Immortals, does very little with a man inside a new body. In fact, the story pretty much runs by the numbers. A younger body and more stamina simply mean Damian goes out and does all the crazy things he hasn’t done in 52 years- play basketball, have sex with beautiful women, and eat the food he was allergic to. When the host body’s memories start creeping in, this cut-throat businessman starts to peel back the layers. How? A Google search, of all things, puts him on the right path. Before you know it, Damian has learned all he needs to know and is in way over his head.

The film starts off on the right foot. Ben Kingsley nails the millionaire businessman perfectly. His accent and mannerisms are spot on. What is sad is that Ryan Reynolds doesn’t take on any of these characteristics. One could easy say this shouldn’t matter, but later another character who shedded his former body has a trait that gives him a way. The story really suffers in the third act as Damian tries to right the wrongs that have been done to his new body’s previous family. A few twists and turns, with a big action scene, make the whole thing feel very hollow and forced. I recommend checking Self/less out, but as one for the collection? Well, that would depend on the price.

Check out a clip and the trailer from Self/less here on The Sci-Fi Movie Page.

Cartoons
Wind in the Willows