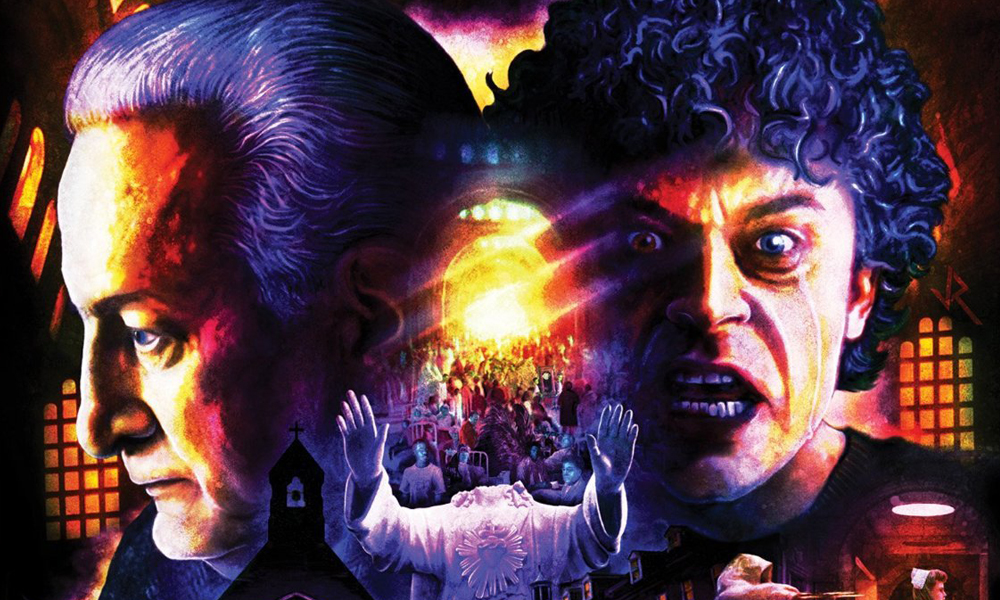 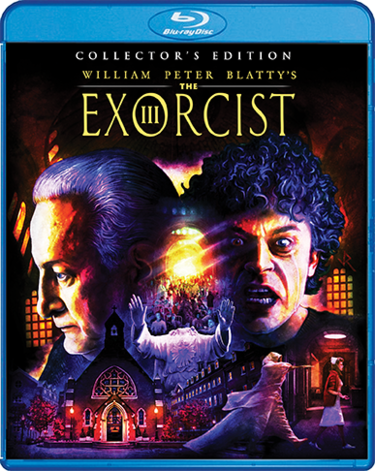 What was it about the Summer of 1990 that made Morgan Creek rush the production of William Peter Blatty’s adaptation of his own novel/ sequel to The Exorcist? Was it the pressure to compete with Joel Schumacher’s Flatliners? Perhaps they thought they had better strike first before Sam Ramie’s Darkman hit cinemas? The answer may lie in Scream Factory’s new Collector’s Edition of Exorcist III. It is another spectacular release that any fan or film aficionado will want to pick up.

Personally, what intrigued me more about this release was that Scream Factory, in their infinite wisdom, had the foresight to give the fans what they really wanted. What that is, in particular, is a chance to see William Peter Blatty’s original director’s cut of the film titled “Legion”. Yes, it is here, Exorcist fans, and we shall get to that in a moment. First, I have a confession to make, I’ve never seen the second or third Exorcist films. Yes, it’s true, but you can only hear so many stories about authors of source material separating themselves from sequels and so on to not want to see another installment. It was my father who planted the seed of curiosity in me about the third film. He told me that the plot revolved around the policeman from the original, Lt. Kinderman, finding Father Karras (Jason Miller) still alive in a mental institution. In the last 10 years, I have made the original Exorcist a must watch in October, so I rolled the dice and took a chance.

Having that rare opportunity to have both the theatrical and director’s cuts in my hands, I decided to watch Legion first. This was, after all, what the director intended. Bearing in mind that some of the footage would be comprised of video dailies, I knew what I was about to see was as close as I could get to what Blatty wanted. While Scream Factory prepared me for less than favorable footage, which I am fine with, they should have added that actors who may appear in the opening titles will not appear in the film. Having seen far too many genre pictures, I know exactly who Nicol Williamson is and in being a fan of the original, I know that Jason Miller is Father Karras. Neither of these two men appear in Blatty’s director’s cut.

The story goes that Blatty’s original cut, based on his sequel novel, had no exorcism in it, nor was Jason Miller available to reprise his role. The studio already had to recast Lt. Kinderman with George C. Scott as Lee J. Cobb had passed away. Did Blatty think audiences would buy Brad Dourif’s Gemini Killer as a suitable likeness for Miller? So upon actually seeing this cut, the studio decided to spend 4 million dollars on an exorcism scene, add the character of Father Morning (Nicol Williamson), and get Jason Miller to reprise his role in the film. Here comes the crazy part: Without all those added elements, Legion is confusing and pretty dull. Sorry, Mr. Blatty, it’s true. 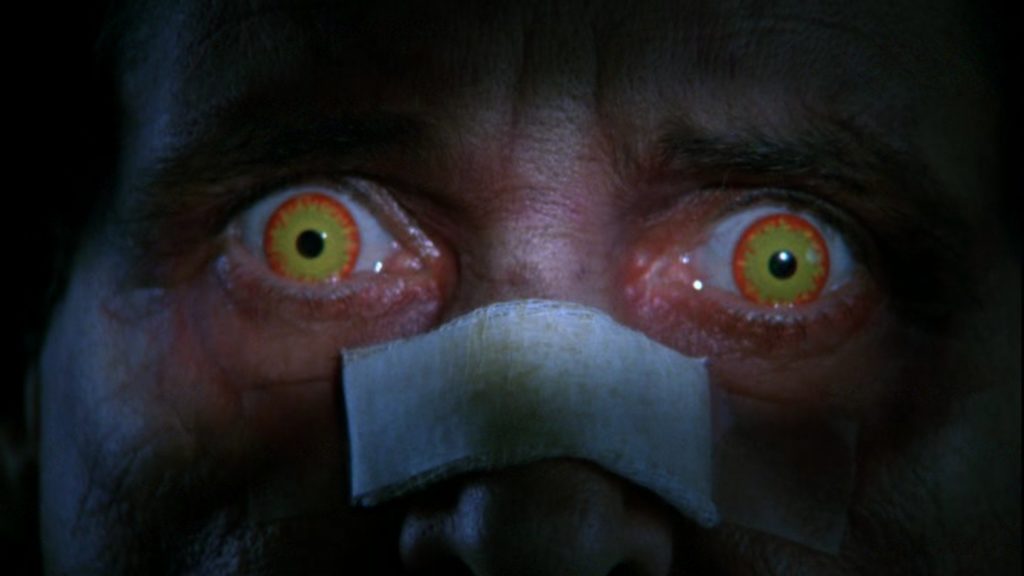 The big WTF is that in Legion we are lead to believe that Brad Dourif’s Gemini Killer has the appearance and trapped soul of Father Karras. It’s a sadistic joke by “the master” who finds a great sense of irony in that the soul of a serial killer, who was electrocuted to death, now resides in a priest who was considered a Saint. The problem is, as good as Dourif is as an actor, film is a visual medium. He may say things only Father Karras knew, but that is clearly not him on screen. The Legion cut does at least two half-assed attempts to portray Dourif as a good likeness of Father Karras, but it’s not enough. This is strange because they do recreate Karras’ flight out the window and fall down the stairs, so why not have Dourif play Karras in those moments, as well? After all, Scott is playing a part originated by another actor. The audience just needs to make that transition, visually.

The irony here is that I actually enjoyed the studio cut of Exorcist III. Was it perfect? No. However, I was generally freaked out with the cutting back and fourth during Lt. Kinderman’s interrogation of the Gemini Killer (Dourif) and Father Karras (Miller). With both actors, it’s actually a haunting performance. Both versions of the film also start out very strong all because of Scott’s banter with Father Dyer, played by Ed Flanders. The acting and the dialogue are solid, it’s just when we meet Patient X (Gemini Killer/ Father Karras), in Legion, that the film becomes dull and a tad unhinged.

This is all just my opinion. I’m enticed to hear Blatty’s commentary on Legion. Perhaps there was more to his vision, but it has been lost for all time. Perhaps some novels don’t translate well into a visual medium? Maybe some movies shouldn’t have sequels.Yeah, that’s right, I said it, Hollywood. Once and done with no sequel dollars. What you get here with these two versions of the film is a great night of thrills and, if you are lucky, a film discussion on what is more important, a director’s vision or entertainment. Now the choice will forever be yours.

Hamilton: In the Interest of the Nation

Hamilton: But Not If It Concerns Your Daughter

The Curse Of Doctor Wolffenstein

Sweeney Todd: The Demon Barber Of Fleet Street In Concert