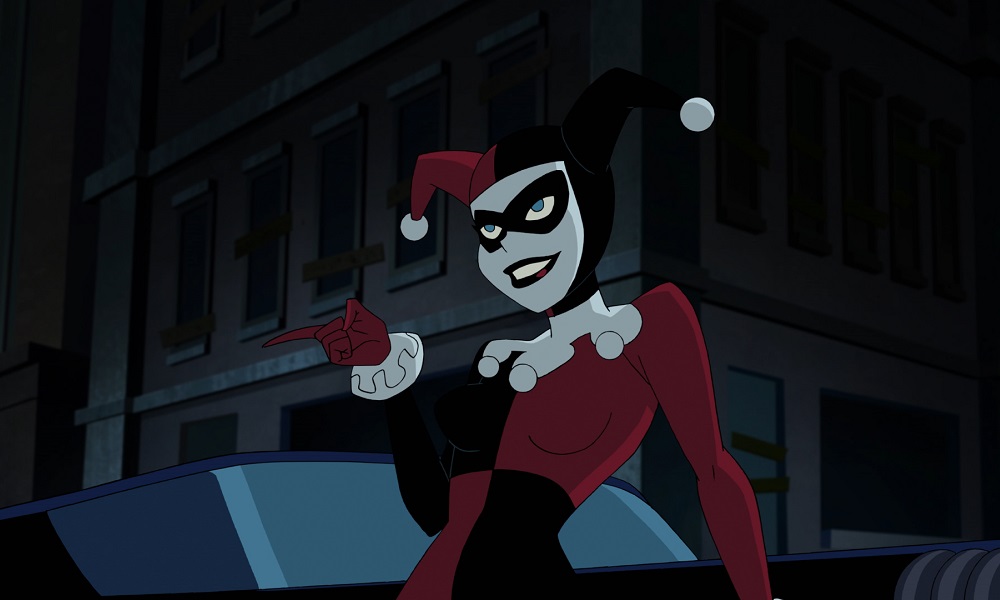 Among the many, many, MANY wonderful things that Batman: The Animated Series gave us was Harley Quinn: originally envisioned as a vaguely interesting minion for the Joker, only to morph into one of the most popular and enduring comic book nemeses of all time. The successful line of direct-to-video DC animated movies – themselves the descendants of B:TAS – never quite found the time for her, limited to an (admittedly terrific) take on Suicide Squad. Batman and Harley Quinn intends to balance those scales by returning us to the Diniverse… and letting its dizziest inhabitant proudly claim center stage.

That involves a sharp change in tone from what we may be expecting, which doesn’t always go over well with those who like the “Dark” in the Dark Knight. Director Sam Liu approaches the film as a screwball comedy with Batman (voiced by Kevin Conroy) and Nightwing (voiced by Loren Lester) play straight men to Harley’s various antics. They need her to find Poison Ivy, who’s up to no good as usual, but the plot basically exists to support full-bore zaniness. 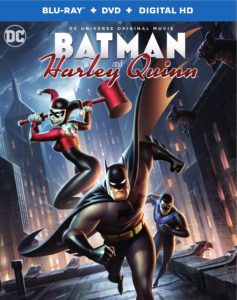 And it’s largely hysterical: creatively conceived and expertly delivered by a cast who knows what they’re doing. Considering the presence of Conroy and Lester – who are marvelous, as always, in their legendary parts – it’s surprising not to hear Arleen Sorkin voicing Harley, since she originated the part (co-creators Bruce Timm and Paul Dini created the character with her in mind). The good news is that Melissa Rauch makes an outstanding replacement: unleashing some of the pent-up emotion beneath the surface of her Big Bang Theory character and absolutely nailing the part in the process.

The light-hearted nature of the story takes it to some extremely ribald places too. Like a lot of DC animated movies, this one isn’t for the kids: flashing overt sexuality (“Little Boy Wonder all grown up,” Harley snickers at a visible bulge in Nightwing’s shorts) and generally flashing the red light as often as it can. That proves less successful than it might, in part because it can’t find the right balance. Batman and Harley Quinn stumbles over the line between “naughty fun” and “sexist pandering” more than once, a frustrating tendency that bedevils it again and again. You can see the tone they’re going for and when it hits, it’s a riot. But it misses more than it should, and with risqué material, it becomes too crude for comfort. (That said, I laughed a lot at the Harley-farts-in-the-Batmobile jokes. I’m not proud of it, but there it is.)

It’s not hard to trace the source of those flaws: a familiar bugaboo that Warners and DC still haven’t cracked. After the shellacking they received for the misogyny on display in Batman: The Killing Joke, the missteps here become much more of a pattern. Yes, Timm co-created Harley, and his signature touch is on display in good ways as well as bad. But the boys’ treehouse is in full effect here – trying to have its cake and eat it too on the women’s image department – and it doesn’t reflect well on what should have been a delightful romp. (A few more women’s names behind the scenes would be a big step in the right direction.)

That said, it’s full of unique energy that you’re unlikely to find anywhere else, and pulls off its slightly naughty vibe while still remaining an inescapable part of the Diniverse. It’s not a perfect trick, but it works more often than not, and for longtime fans in the right state of mind, it can make for a fun diversion. DC’s animated features need to do better. This time, at least, their missteps don’t cost them the whole thing.

The animation is adequate for this one, but clearly reflecting a faster, cheaper production than these characters deserve. Liu keeps the pacing tight and the action moving, so it’s easy to overlook, however. The extra features, as always, are a bit of a treat: starting with an informative short on Harley as a character and continuing with a look at Lester, a preview of DC Animated’s next feature and a pair of Harley-centric (and much beloved) Batman: The Animated Series. It’s par for the course for these features, but no less welcome because of it.