Marie Wankelmut (Susanne Wolff) a successful but artistically stagnant graphic novel artist lives in the red-light district of Amsterdam, drinking her life away trying to draw her next big project. She lives alone with her dog following the death of her mother. A death Marie slept through while in her usual nightly drunken stupor. 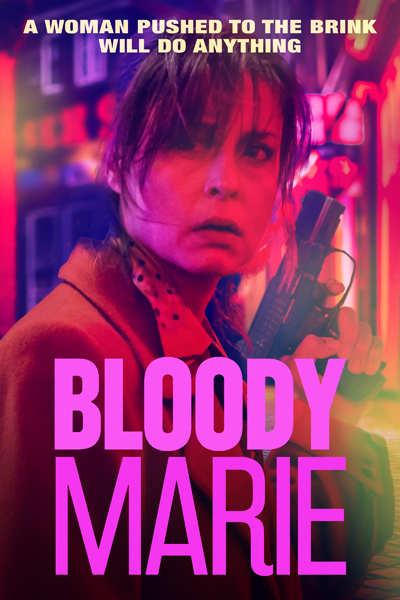 Marie spends her days sitting at her desk trying to think of something to draw and her nights carousing at her local bar only to at times literally crawl home when she is done for the night. She’s not an angry, bitter drunk, but she is a near complete drunk and she is vibrant and lively, but her drinking is so bad, that one night even her regular liquor store refuses to sell her alcohol and implores her to stop.

Returning home one night, drunk, but desperate for more she spots her neighbor, a pimp, with a bottle of alcohol. She implores him for a drink, but he tells her he’ll sell it to her. Having no money, she trades him her lovely red shoes for the bottle.

Bloody Marie is a beautifully shot thriller that was filmed in Amsterdam and whose plot is not too unbelievable. It is an interesting character study of a woman whose drinking her life away and ends up getting involved, in the wrong way, with her pimp neighbor and his shady dealings and violence that is going on.

Susanne Wolff who plays Marie injects the role with beauty, humor and a believable amount of regret and strength as the drunken artist. Her character is not bitter and angry so much as aimless, self-destructive and even impulsive. Her only goal seems to drink herself into oblivion and drown the world out for the most part, but she seizes on opportunities with abandon. Most notably in her art life, but later with her neighbor. First by trading her shoes to him, then by robbing him one night when she spots her beloved shoes on his windowsill.

An act that kick starts the action part of this drama thriller as she ends up being visited by him and later witnesses a murder and cover-up when she tries to return his forgotten cell phone to him.

The movie was good. The actors were terrific, and the story was simple and not overly complicated by meandering or pointless characterizations. When the action picked up there were some thrilling moments caused by the natural tension of the situation. There was nothing too unbelievable about the action or events. This movie’s brilliance in directing and writing is in how simple it is, for what it is.

This is a nice character study with a bit of a thriller thrown in. Bloody Marie has a little violence, but it is not over the top and is more realistic and down to Earth in comparison to either a Hollywood film or low budget film. The onscreen deaths have a weight of reality to them and tragic finality, even the death of the bad guys had a tinge of tragedy to them. If not for the dead wasted life, but for our main character.

This film was pleasantly entertaining for its simplicity of story and beautiful filming, both locations and style. It had a real lived in feel that captures both the beauty and sadness of the locations. They had an authentic lived-in feel of old places inhabited by real people with real problems. Sounds odd and cliché, but it’s hard to find any better way to describe it. The direction and pacing were perfect for this little film.