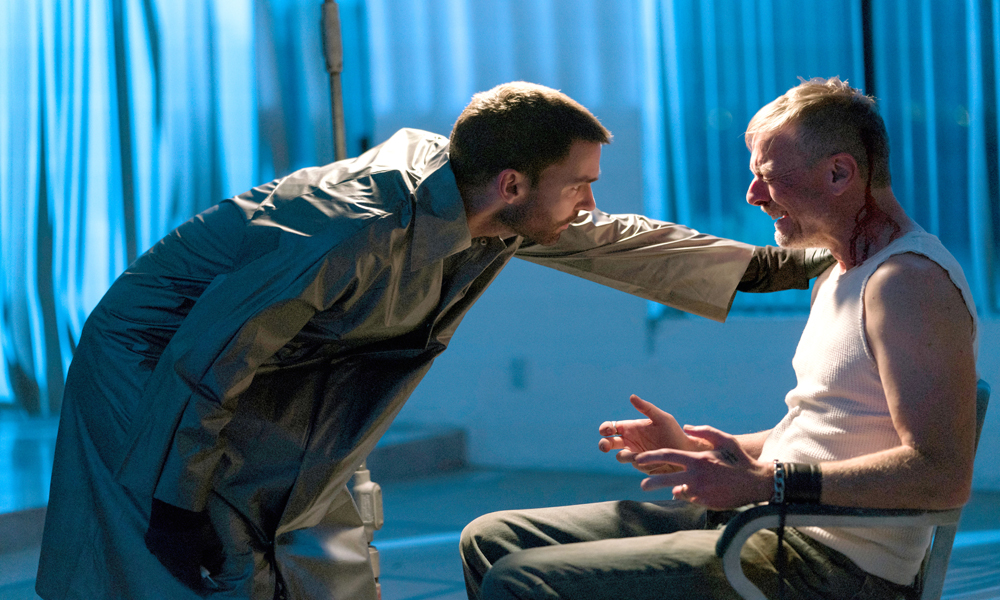 Being typecast. Nobody wants it to happen to them because even if the notoriety and popularity exists today, tomorrow it could mean very few jobs and the same expectations. Bela Legosi may have been the toast of the town when Dracula was making headlines, but years later he found himself reduced to repeating the role or living off his name alone in B-films. Sean William Scott from the beginning has been synonymous with goofy comedies. He was the everyman in commercials until he found fame as a sex-starved troublemaker in American Pie. Pretty much every production he’s acted in has seen him play an ordinary guy or a fast-talking comic relief. 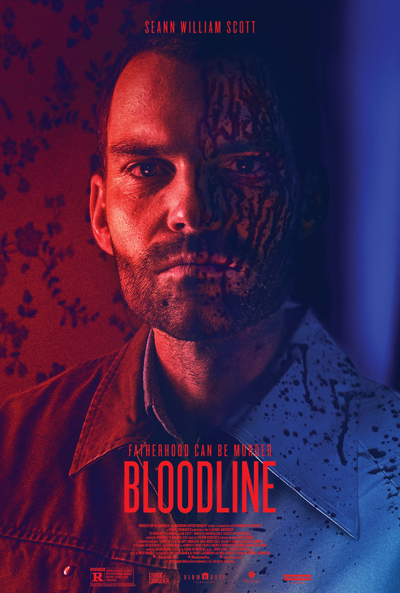 He’s clearly trying to edge out of his own shadow here. Now he’s shooting for the coveted clout of Micheal C. Hall’s lauded Dexter performance, taking on the persona of a glowering serial killer or few words. This ain’t your daddy’s Sean William Scott. He swears, he kills people, he never smiles and the closest he comes to humor is coldhearted one liners to punctuate acts of violence.

It makes a better trailer than the repetitive full length slog it exists as. Apart from Sean’s midlife crisis, the other appeal of Bloodline is an attempt at a high concept premise. Evan, a clean-cut and polite school councilor and devoted father, has a duel existence. By day he’s a calm, collected, and only almost robotic citizen and family man. At night he’s a vicious murderer. He has to reconcile his humdrum existence with the need to lash out, and like the forensic blood spatter analyst he draws so much influence from, he tries to justify his craving for death by going after people who he believes deserves his blade. Notable he works out his own anger about his abusive past by butchering others who have abused their own children.

It helps that for the most part the film goes out of its way to indicate these people are cartoonishly evil (rapists, racists, promiscuous…etc) so Evan’s deeds are supposedly balanced out. Unfortunately this feeds into a central problem with Bloodline. It tries to play both cards. On the one hand, this is theoretically about the complexity of baser instincts of man stacked against the veneer of civilization people maintain in polite society. But in practice this is a sad-sack slow tone poem about all the people the writer/director doesn’t like being vicariously slaughtered. There’s no moral implications here at all. Everyone murdered is unkind, cruel, thoughtless. Killing them has no bad ramifications and in fact in every instance murdering people is seen as a good thing.

The fact that the literal murderer is portrayed as unfeeling barely registers when everyone else is devoid of decent motivations and have little to say or do but be passive aggressive or shout at each other. So if you don’t care about anyone, if every character is selfish and/or killing out of a twisted sense of self-righteousness, how can you become that worked up when they die, however horribly?

On that note the special effects are disturbingly brilliant. Whether, digital or practical, the throat slashing and slow seep of blood oozing through wounds is so close to reality it’s frankly unsettling.
Apart from heinous moral implications, Bloodline is really really dull.

It is competently shot and directed with a flourish, but a routine of family drama and clinical murder becomes tiresome after it’s been replayed again and again. There’s an attempt to capture an 80s nostalgic suspense with bold colors and a waddling synth score, but it doesn’t matter if nothing changes, nothing develops. The big answer to every mystery or issue is the same every single time.

Even top notch effects work can’t save a reciprocal, joyless, flavorless screed. Like the dead eyes of the actor trying to show range by removing his personality, Bloodline is devoid of pity…or nuance.