Are you ready to be scared? 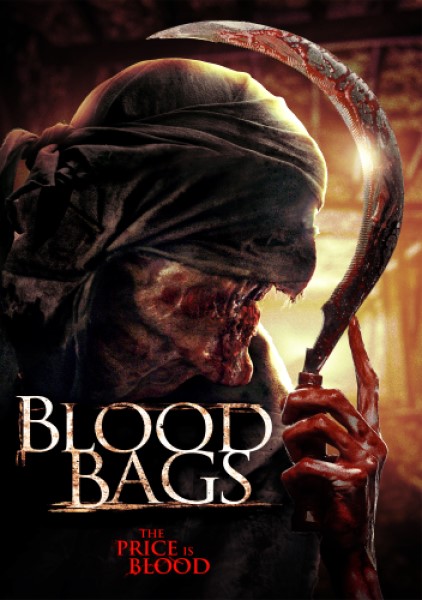 It’s not clear if that’s really the purpose of Blood Bags. Despite the real world grounding of a potentially intriguing concept (medically induced vampirism) the production actually seems more like an MGM creature feature rather than a contemporary ‘Saw’ like horror flick. The direction is VERY static (a lot of shot reverse shot sequences), the dialogue bordering on perhaps deliberately cheesy, the music lacking in subtlety, even the oozing logo is as ostentatious as the rest of the in-your-face aesthetic. This is the kind of movie where the monster literally makes a hissing, growling noise like someone in a sound booth given only the directions ‘sound like a monster!’.

This is not the kind of movie where people on the edge of their seats in suspense. Instead it’s the kind where an audience would likely be shouting at the screen for the characters to stop making dumb decisions and wildly applauding every time a nifty squib effect goes off.

The monsters, the over-the-top gore, the silly characters, the intense lighting and ever-present to the point of being intrusive strings and drums and even guitars makes this movie feel like a late night drive in feature…for better or for worse. For better as the film seems tailor-made to cut the fluff and practically seems to relish the iffy acting and cliches. For worse because, like films of this ilk from the 60s 70s and 80s, there is hardcore padding going on constantly: footage that is clearly just the filmmakers shooting their Italian vacation, long drawn out moments well beyond the point of a scene being made. I bet you didn’t figure that the person setting up the camera would actually set up the camera until you’d seen every…single…second of the operation, including fumbling the tripod.

Blood Bags could easily have been released in an earlier time with scratchier film footage. We’re not going sleek here so much as workmanlike. No heavy digital effects. Mostly incidental sets (literally looks like abandoned houses). Simple as a straight road story and one-note characters who mostly exist to wander off and die.

So far so standard, but Blood Bags is way too long to sustain such flimsy plot threads. I mentioned the padding and it’s thick everywhere, taking about ten minutes for something as simple as firing a gun to take place. Between times the stock lighting, boilerplate camera work, B-grade acting, and ultimately a somewhat silly looking antagonist doesn’t really add up to a groundbreaker.

There wasn’t a lot of ambition to begin with in Blood Bags, but if the film isn’t going to bring much to the same populated genre it clearly drew from, where is the sell? Yes there’s a twist, but it’s as predictable as it is nonsensical. Something I kept wondering throughout: why would people who need to drink blood spill so much of it? If you want to harvest hemoglobin, maybe don’t kill people so their hearts stop beating? Maybe vampires just aren’t that smart, or are very impatient.

Fans of any horror will probably find some things to enjoy (or laugh at) but those hoping for gritty shock and splatter will probably be disappointed and those who deliberately go after low tier films for amusement and critique won’t find too much original or even memorably bad to point out here. It’s kind of adorable how DIY this movie feels, and that charm might rub off on you too. But Blood Bags can only safely be said to be ‘another’ horror film when it comes down to it.