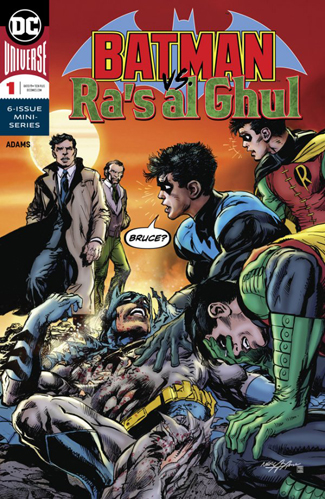 Excitedly reuniting legendary American artist Neal Adams with a character he co-created alongside Denny O’Neil and Julius “Julie” Schwartz way back in 1971, this opening instalment to “Batman VS. Ra’s al Ghul” was one of the most hotly anticipated titles announced by “DC Comics” as part of their Year of the Villain promotion. Yet despite being supposedly “pushed back two weeks for a September… release” by its Burbank-based publisher, this “end of an adventure that’s taken three graphic novels to resolve” debatably contains a palatable ambience of ill-disciplined haste, as well as an overriding eagerness to quickly set a disconcertingly contrived metropolis-wide emergency for the Dark Knight to face.

To begin with however, this twenty-two page periodical’s pulse-pounding plot does look set to provide a truly enjoyable read, as the Joe Sinnott Hall of Famer’s narrative goes straight for the jugular with the titular character desperately trying to single-handedly save his beloved Gotham City from a mass terrorist uprising. Packed full of far more punches, pugilism and pooches than arguably your average modern-day superhero comic book contains, Adams’ dynamically-sketched action actually goes on to step up a gear once the Caped Crusader heatedly turns upon a group of heavily-weaponed “not S.W.A.T.” who have started gunning down a group of extremists; “Batman is attacking… the… Batman is certainly angry here. He’s punishing those armed men for shooting the terrorists.”

Sadly though, what then follows makes little sense considering its plot is based upon the bizarre premise that Ra’s al Ghul, an international criminal mastermind and Image Games Network’s seventh top comic book villain of all time, has been brought in by the municipal’s mayor in order for the maniac’s “thirty-five trained and equipped agents” to aid the over-stretched authorities. To make matters worse this whacky decision is even ardently defended by Commissioner Gordon, despite the senior policeman having literally just witnessed one of Professor al Ghul’s personal security guards gun down a “man in cold blood”, only makes matters even more unstomachable…

The fact the Manhattan-born illustrator depicts the moustached, former United States Marine Corps veteran siding with Batman’s ‘Moriarty’ rather than turning to his government’s armed forces for assistance, arguably makes this six-part mini-series storyline fall flat on its face almost from the get-go, and comes across as being as likely as the Bronze Age superstar’s next decision which is to portray Bruce Wayne’s alter-ego wearily walking away from the ongoing death and destruction surrounding a triumphant Ra’s al Ghul in utter disgust…