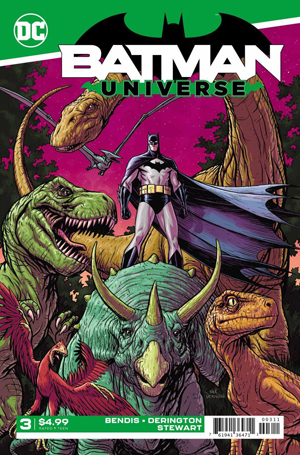 The adventures surrounding the Faberge egg which began in Batman Universe #1 continue in issue #3. Batman finds himself transported to Thanagar in hopes of finding the source of the radiation being emitted from the egg which appear to be of another galaxy. He wakes having to prove he comes with good intentions and is in fact the Batman and is vouched for and even fixed with a set of wings to fly across the city with Jixa Hol.

They are attacked and Batman is transported again to Gorilla City where he previously went in search of the Riddler. He learns that the egg has been stolen again, is transported again, and wakes up to Green Lantern and Cyborg having to sort out that Gorilla City wasn’t a dream. From here the three team up to search for this thief, taking them eventually to Dinosaur Island. After some searching they are transported again where they come face to gnarled face with someone who should hold the answers to this mysteriously valuable Faberge egg.

From teleportation and team ups to detective work and dinosaurs this vibrantly colored and action filled issue has everything you could want. The Gorilla City and Dinosaur Island scenes are especially vibrant and bold making the book a solid must read. Five stars!