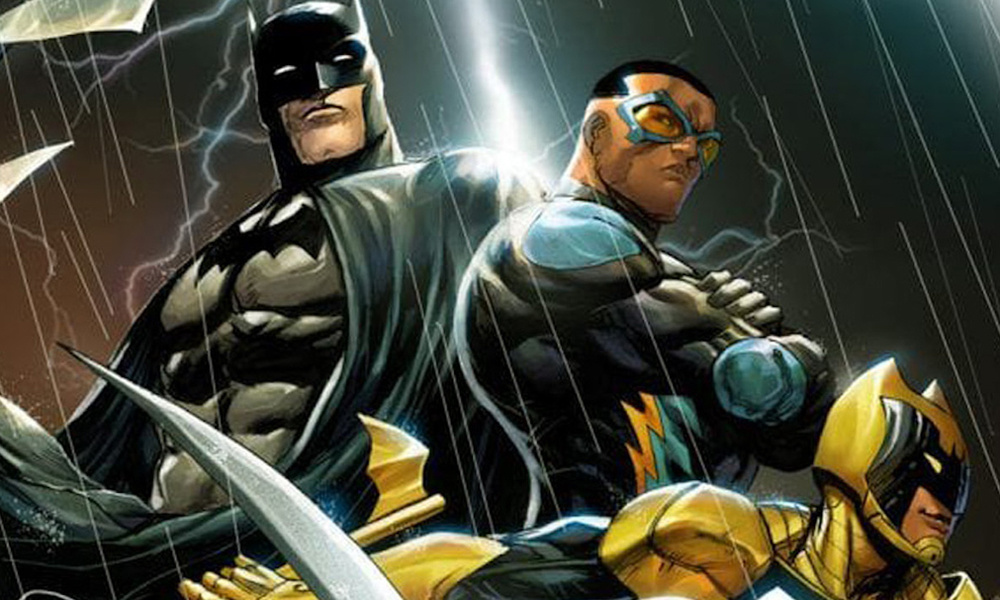 Having been suddenly cancelled by “DC Comics” in November 2018, with the subsidiary of “Warner Brothers” promising comic book retailers that the title would be re-solicited “later in 2019”, fans of “Batman And The 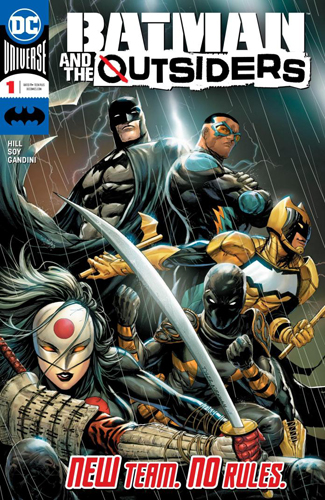 Outsiders” were probably hoping that writer Bryan Hill’s “tweaking of some of the script because of DCU events” was going to make this particular twenty-four page periodical truly stand out from amongst the myriad of other Dark Knight-related publications swamping the local store’s spinner rack. Yet whilst “Lesser Gods” starts off well enough, with a super-powered villain mysteriously targeting a single parent and his daughter as they innocently drive through Los Angeles, the American author’s narrative soon arguably gets badly bogged down in the doubts and fears of its leading cast; “Neither are you, Signal. That’s why I had to save your life. We have to work together. We’re a team.”

True, the super-group’s dynamically-paced battle against the homicidal shootist Saint John provides plenty of pulse-pounding action whilst it lasts, especially when it seems clear that Duke Thomas is intent on hurling himself against the gun-totting maniac simply to show comrade-in-arms Orphan that he is neither afraid nor feels he needs Black Lightning to tackle the mass of murderous muscle blazing away at him with a rotary cannon. However, just as soon as Katana cleaves the brute’s machine-gun and “Raijin” zaps the felon into next week, this book’s plot arguably degenerates into little more than a series of word-heavy, dialogue-driven scenes where everyone from Bruce Wayne through to Jefferson Pierce openly discuss some of their most innermost concerns about the freshly assembled team.

Debatably this comic’s biggest frustration though, is the fact that Batman is rather kept on the sidelines, disappointingly directing his proteges to “find Sofia [and] bring her to Gotham” from the shadows, rather than directly leading the Outsiders himself. Indeed, the Caped Crusader doesn’t even appear in costume until the second half of the book, when he is simply depicted ruminating upon the Bat-computer’s suggested action for him to contact the Los Angeles Police Department for more information on Ramos’ disappearance.

Happily, what Hill’s script lacks in gripping drama is somewhat ‘put right’ by Dexter Soy’s marvellously energetic pencilling, which really helps imbue the plot’s more sedentary scenes with some much-needed gravitas and foreboding atmosphere. Black Lightning’s ‘friendly duel’ with Tatsu Yamashiro at her “little place in Gotham” is a good example of this, where the somewhat stilted dialogue between the pair is made all the more tense and enthralling courtesy of the Goodreads Choice Award-nominee’s incredibly thrilling artwork.

Be sure to check out Simon’s blog here: https://thebrownbagaeccb.blogspot.co.uk/