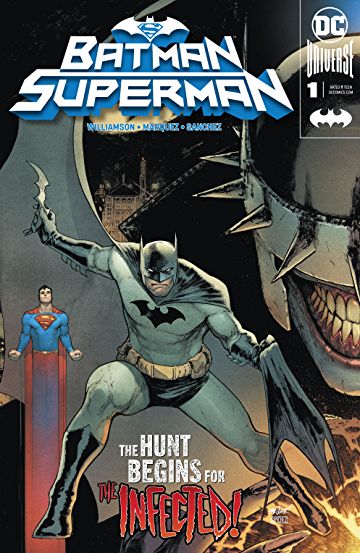 Initially conceived as a “very Superman centric” title which may well have simply built upon the “New 52” Greg Pak and Jae Lee “Batman/Superman” series, at least according to Joshua Williamson, this exhilarating twenty-two page periodical undeniably benefits from the inclusion of The Batman Who Laughs as the book’s “underlying villain” and its narrative’s shift in focus from the Big Blue Boy Scout to the Dark Knight instead. In fact, it’s arguably hard to imagine the “New York Times best-selling author” penning such a deeply dark and disturbing storyline as “Who Are The Secret Six?” with Clark Kent’s alter-ego actually taking the lead, especially when this publication’s storyline so clearly spins “out of the devastating events” previously wrought upon Gotham City by Batman’s evil counterpart from Earth-22; “I stopped his plan, but there was a serum… He could have used it to infect others…”

Fortunately, such a “switch it round” clearly took place, leading to a genuinely unnerving exploration of what would happen to “our heroes” close relationship with one another should the Man of Steel truly turn evil, and a tense journey beneath the pious pavement of Crime Alley into the dank, torture device-filled Bat Cave of The Batman Who Laughs. Wonderfully claustrophobic, and packed with plenty of action too as the ‘dynamic duo’ are assaulted from all sides by a horde of robotic “Knightfall” flavored drones, this comic increasingly manages to raise the neck hairs as it becomes progressively clear no cape within the DC Universe is safe from the maniacal machinations of the utterly insane alternate universe Batman, not even those within the Titans, the Justice League or the Teen Titans.

Likewise, Williamson’s writing throws quite a few curveballs into the mix both to keep this title’s readers on their toes, and maintain the strong belief that the “terrifying new threat” of the clown-faced maniac’s highly-infectious serum “could strike from anywhere.” Superman’s supposed death, courtesy of a lungful of Kryptonite-infused gas within the Justice League satellite is a great example of this, as is the disconcerting Cheshire Cat grin of Commissioner Jim Gordon following his apparently earnest dispatchment of the ‘Caped Crusaders’ to recover the abducted adolescent Danny Mills.

Sensationally supplementing this superlative story-telling is David Marquez’ prodigious pencilling, which goes a tremendously long way to help build the mounting horror which his creative co-worker’s script contains. In particular, the American artist’s incredibly emotional and well defined faces really help to sell the rising discomfort Superman starts feeling as he realises his entire mission is a set-up, and that instead of facing a toxin-poisoned thirteen year old kidnap victim, he has stumbled upon an unbalanced Billy Batson instead… “Shazam!”