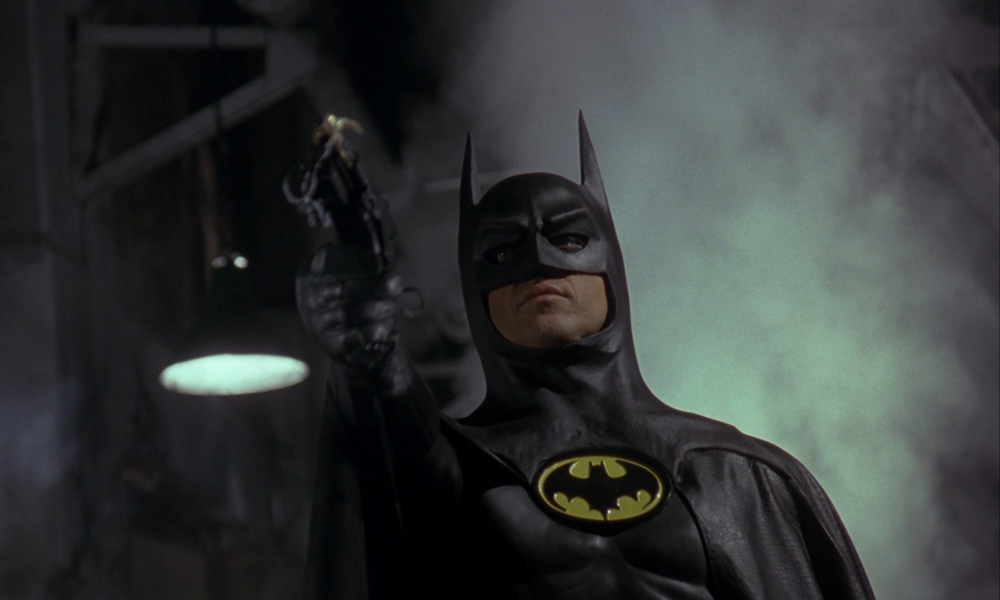 Warner Brothers has just released all four of the late 80s and 90s Batman films on blu-ray and 4K disk and we are taking a look at them one-by-one.

If you think that the casting of Ben Affleck or Robert Pattinson in the role of Batman was controversial let me introduce you to 1989. These were the minor leagues compared to the outrage of Michael Keaton being tapped to play Batman in the first big screen portrayal of Batman since the 1960s. People thought Keaton’s casting meant that the new Batman film would be a comedic sendup of the comic character, just like the 60s Adam West Batman TV series. After all, Keaton was a comedic actor, starring in movies such as Night Shift, Mr. Mom, and Beetlejuice. Batman was riding a wave of popularity thanks to stories like “The Dark Knight Returns” and “The Killing Joke”. These were dark, brooding, and violent tales. Nothing about Keaton said dark, brooding or violent. In hindsight, thirty years later, Keaton reigns supreme, above Bat Nipples George Clooney; growling Christian Bale; and emotion lacking Affleck. 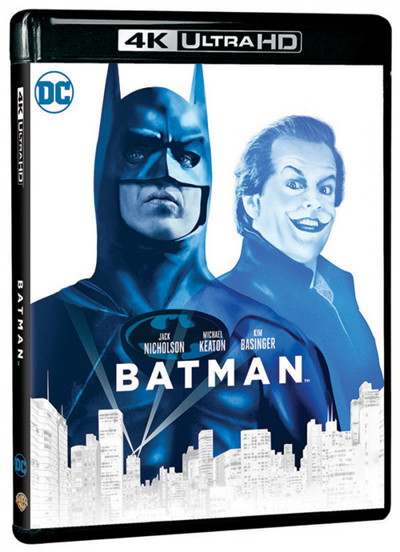 The 1989 Batman film was the fastest film to ever earn over $100 million at the box office and was the number two film of the year behind Indiana Jones and the Last Crusade. Directed by Tim Burton (himself a controversial choice), Batman was a lavishly produced film filled with amazing gothic imagery that was as much the star as any of the actors. Joining Keaton in the film was Jack Nicholson who brought true star power to the film as Batman’s arch enemy, Joker. Kim Basinger starred as photographer and love interest Vicki Vale. The cast also featured screen veterans Billy Dee Williams, Pat Hingle, and Jack Palance.

Burton smartly doesn’t get caught up in the need to tell Batman’s origin. Instead Batman is already in the early stages of his career as a vigilante in Gotham City and considered little more than an urban myth. Mob boss Carl Grissom (Palance), discovers his mistress Alicia is having an affair with his second-in-command, Jack Napier (Nicholson). Grissom engineers Napier’s death in a raid at Axis Chemicals. However, Grissom’s plan is foiled with the sudden arrival of Commissioner Gordon (Hingle), who wants Napier captured alive. Batman arrives and, in a struggle, Napier is knocked into a vat of chemicals. Batman escapes and Napier is presumed dead. He emerges with this skin bleached white, his fair bright green, and his mouth stuck in a ghoulish grin. The Joker is born!

The Joker terrorizes Gotham City by lacing hygiene products with “Smylex”, a deadly chemical which causes victims to die laughing with the same maniacal grin as the Joker in a social commentary about our obsession with vanity. Eventually this leads to the final showdown between Batman and Joker atop the impossibly tall tower of the Gotham cathedral.

Adding to the film’s flavor is the magnificent score of Danny Elfman and original songs by Prince. As it turns out we needn’t have worried. Batman turned out to be the best superhero film since Superman II and still one of the best today. The film looks better than even in 4K UHD, especially the dark portions of the film are so crisp and clean.

The set comes with a ton of extra features the best of which is the first 3 parts of the Shadows of the Bat: The Cinematic Saga of the Dark Knight