Fighting a world war is hard enough without a zombie curse! Can you bring your side to victory while surviving the rising tide of zombies?

Avalon Hill today announced the launch of the newest board game in the Axis & Allies series – Axis & Allies & Zombies! The iconic World War II strategy game has been a cultural mainstay for decades, and this fun twist will introduce the game to a new audience, while providing existing fans with another variant– and zombie-specific R&D weapons like Chainsaw Tanks and Zombie Mind Control– to play. 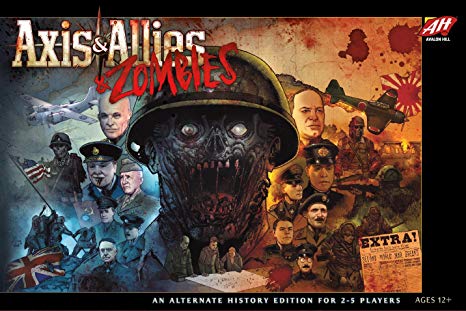 It is 1941, and the world is at war. The Axis war machine is crushing everything in its path, while the Allies are rallying together to mount a heroic stand.

And then zombies show up.

As the commander of one of the five major powers, you are charged with planning a strategy to win the war. But each battle provides more fresh corpses for the flesh-eating hordes, and the problem is getting out of hand. With your human enemies on one side, and the ravenous undead on the other, it is time to ask yourself, “Do I invest in tanks or chainsaw tanks?”

Stand firm, commander. It’s tough choices like this that will determine victory or undeath.

Axis & Allies & Zombies was designed by Wizards of the Coasts’ award-winning designers and developers – Mike Mearls, Scott Van Essen, Ryan Miller and Mons Johnson – and includes an introductory scenario to provide new players with an easy-to-set up prelude, as well as quick-start rules for more experienced players to jump right in. The game also includes an expansion for the Axis & Allies 1942 board game. Recommended for 2-5 players ages 12+, the game has a suggested retail of $40.  http://avalonhill.wizards.com/games/axis-and-allies/zombies