Posted By: adminon: May 20, 2019In: Movies, ReviewsNo Comments
Print Email

80s aesthetic is the new hotness.

From the shimmering synth music to the harsh red text titles Avengement wears its inspirations proudly. Other wells drawn from liberally are the films of Guy Ritchie echoed in the non-linear editing and the blending of comedy and violence: both of these owed to the tough-talking criminals of the cast. British noir like Get Carter seems to inform the general concept of the pugilistic streetwise antihero without compunction and family issues but with moxie unto spare. There’s a lot of familiar UK usual suspects for gangster films across the pond you’ll see in plenty of major and minor roles here: almost a genre reunion. 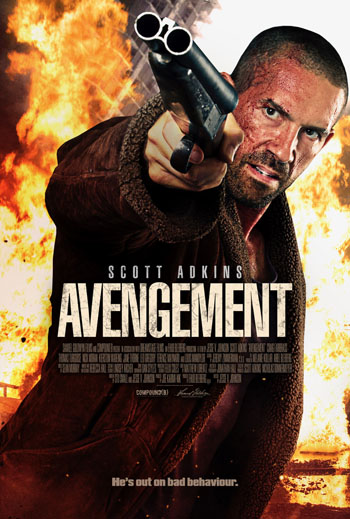 Not to say that the film lacks identity. Underrated action hero Scott Adkins can hold a scene with his combined charm and cold grit and there’s a little more bravery on display in terms of practical gore and harsh profanity, not to mention unapologetically colorful but realistically difficult to discern cockney accents and coloquialisms.
It’s a fairly typical hardbitten yarn which scuttles along at a decent pace. We’ve got the decent but capable guy who nurses a grudge (and bruises and broken bones) in wrongful imprisonment until he emerges a jaded revenge machine with some stylish scars and a nifty metal grill. Scott is no stranger to highly athletic roles and he is stylish and swift as he’s ever been here, duking it out with highly experienced stunt fighters not afraid to take some pretty heavy punches and take some heavy falls in that beautifully painful way only a professional truly can. It’s all pretty enjoyable in a visceral fashion.

The shortcomings of a clear genre film like this can be easily ignored by many who just want to watch a fit, likable badass kick some fools around for an hour and some change. The more discerning will notice however some incredibly generic and out of place sound effects, some wonky lines, and the rare mistimed spatter of a squib not quiet in the right place. At least this film does use actual liquid blood effects instead of computer animation. It does indicate a genuine drive to recreate the kind of no-holds-barred down-and-dirty action the filmmakers revere without question.

Another issue is the surprisingly static setup. The flashbacks are in motion, but a surprising majority of the story is set in a single location with the characters standing around. A gun is involved so there’s tension but it was an odd choice to keep flashing forward to a sequence with the characters just stiffly growling at each other. This is not a film lacking in action but when the hub of the wheel is comparatively lifeless it’s an odd decision for an otherwise speedy flick.

Avengement, from the title to the music to its heart and soul, is an affectionate throwback to a time when the word ‘protagonist’ didn’t necessarily mean heroic and style overrode substance without shame so the style was polished to a mirror sheen. There’s no bad acting to be seen, plenty of gorgeous technical fights, and if you can’t get enough of oversea accents you’ve got a lot to look forward to. It’s not perfect but it hardly means to be so criticizing the details feels like complaining about ice cream because of a lack of nutritional content.

It’s breezy, it’s bloody, it’s snappy, and you might even feel a tinge of nostalgia.